Monday Review: THIS ONE SUMMER by Jillian Tamaki and Mariko Tamaki 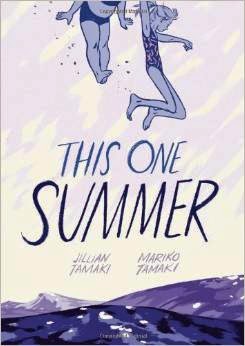 The awesome team of Canadian cousins behind the wonderful graphic novel Skim (reviewed here) is back with a thoughtful, sometimes-wistful, sometimes-wrenching, always poignant look at what it feels like to grow up. Rose Wallace and her parents have gone to a cabin at Lake Awago every summer since she was five years old, a time of sun and rain, swimming and DVDs and silliness and Twizzlers from the corner store. Rose's friend Windy is always there, too, a year and a half younger, but one of those summer friends you grow close to with proximity and lack of other options and years upon years of being together.

This summer's different, though. This summer, Rose is—I don't think we're ever told exactly how old she is, but she seems to be on the edge of teenagerhood; twelve, thirteen, maybe. Old enough to look a little differently, with new interest, at the guy who works the corner store, Duncan. Old enough that the age difference with Windy really does make a difference. Old enough that her parents can't explain away their continuing arguments. Old enough to find out about the secrets of adulthood, but not quite old enough to fully understand, not quite young enough to pretend that fear and sadness don't exist. Old enough to find out that adults aren't perfect and neither is anyone else. It's a book about the barely-perceptible transition out of childhood that happens over a period of time, to all of us, that involves something lost as well as something gained.

This is such a thoughtful story, such a slice of life, with vivid characters you can believe in and feel like you know, even after just a short time—just like those summer friends you meet and instantly bond with. It's not one single drama, but a series of events that, taken cumulatively, are life-changing in a quiet way. This One Summer perfectly captures that elusive feeling of being on the cusp of young adulthood, ready and maybe not-quite-ready for the expanded world that encompasses both pain and joy.

Thanks to First Second for the review copy.

You can find This One Summer by Jillian Tamaki and Mariko Tamaki online, or at an independent bookstore near you!
Posted by Sarah Stevenson at 4:32 PM
Labels: AF, Graphic Novels, Realistic Fiction, Reviews

This looked DARLING and I read so many good things about it - and best of all, one of the girls is just a cute and rounded as she can be, and the whole novel isn't about that.

They're both adorable. I feel like I KNOW them, they're so authentically portrayed. And no, the novel stays away from body image issues and in fact avoids being "issue-related" when it could easily have strayed there. People *have* issues, but it isn't the point of the book.