WCOL Wednesday: THE HOUSE ON PARCHMENT STREET, by Patricia A. McKillip

Sometimes I get on a tear and read ALLLLLL The Things from one particular writer. I've been on a McKillip tear, so I have been re-reading all of the old favorites I can find, like THE FORGOTTEN BEASTS OF ELD and THE ALPHABET OF THORN and all of those lovely, ethereal and particularly McKillip-y books, when I ran across one I hadn't seen before. THE HOUSE ON PARCHMENT STREET? I wondered to myself. It had that sort of hideous cover that always says 70's Children's Book to me... and sure enough, that's what it was.

A little research, and I found three covers - one the original lavender library binding, one the original shrieking yellow paperback, and one a paperback re-issue from Aladdin in 1978, which makes the main characters look like they're all about six years old, which is a shame. The earliest covers focus on the historical characters in the novel; on the back cover of the hardback is depicted an elderly woman cleaning a gravestone - taken straight from the text, but a potentially odd choice for the cover of a MG book. However, it was originally published in 1973 - well before we were reading around here - and very much explains the writing style, the prevalence of mustard yellow, and the design choices.

CONCERNING CHARACTER:: Honestly, there's just something ABOUT these old-school middle grade novels. There's mystery -- sometimes to the point where the reader is scratching their head, going, "Eh?" 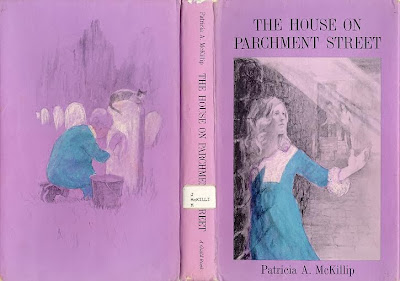 The tale opens with a tall, thin, red-haired girl arriving in a poky English village, on foot. Her hair is a mess, she's barefoot, and she's lugging a suitcase. She stops in front of a large, walled house which is across the road from an old-fashioned cemetery. Abruptly, she is surrounded by catcalling boys on bicycles, circling her, staring insolently, and calling names. When she speaks, it is apparent that she is American, which makes her even more an object of interest.

The tall girl swings her suitcase around and knocks the catcalling boys away (leaving one protesting, and trying to speak) and goes through the gate, into the house - and nearly runs over another boy who is inside, fixing a bike. Still no shoes. Still big hair. Still no real explanation for what's going on.

And, yet, the scene more than sets up the out-of-place, uncomfortable and distasteful emotions in the character. Carol is a California hippie-type who's really not at all sure about this "month abroad to expand your mind" thing she's been sold on. Between the stupid boys, staring at her hair and her height and her thinness - and the glowering boy inside the house, Carol feels like an imbecile. She feels stupider still to realize that she wasn't supposed to pick herself up from the airport - her aunt and uncle are even now searching for her. It's going to be a horrible summer. 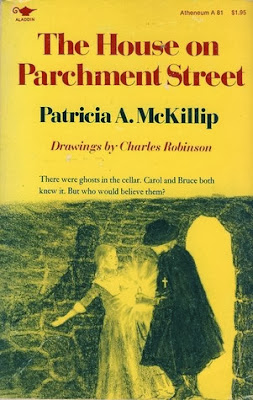 Bruce meets his cousin, and is grudgingly sorry for her, mixed together with his annoyance that she's going to be in his way four a month. He suspects he should do a better job of being nice and polite, but as far as he's concerned, once he shows her to her room, he's out. Interestingly, the novel gives us a lot of insight into Bruce's emotional state without giving anything away - but it's clear from his prickly demeanor that something is going on with him - but what?

Bruce is a brat, his friends are imbeciles, and she's not keen on graveyards, even if she is nearly fifteen. Carol would like to go home now, please.

Bruce would like her to go -- or, no, stay. Stay and distract his parents, with her wild red hair and clumsy American awkwardness. His parents right now are driving him nuts anyway - his Dad is harping on his smoking (!) and implies he's a bully, when he's just hanging out with his friends...and bothering people until they sometimes break down and cry (And, this is why to me the image of Bruce on the 1978 cover is ludicrous). However, his friends are driving him nuts, too - following him around, demanding his time, harping on him for not hanging out more. He's fighting with his father, he's fighting with his friends, he's fighting with himself. Everything is annoying, and Bruce hates the house their renting. It's freezing, it's too dark, and his father hasn't listened to anything he's told him about it, at all. And, most of all, Bruce does need someone to listen...

Misadventure seems to follow Carol - she nearly brains her cousin and breaks her elbow messing with an ancient weapon, she breaks things, she stumbles around. After nearly burning down the house the night before - and her bed - Carol finds the English summertime damp and cold - she's left at a loose end, since Bruce seems to be hiding from her,and her aunt and uncle are busy. Glumly, Carol climbs a tree, visits a lady who lives by the graveyard, and wanders the big, cold house behind its gates and high stone wall. It's kind of an adventure - until she sees a man with a sword walk into the wall. Yes, into the wall. She mistook it for a shadow, until it happened again when she was alone... Great. Now, on top of every other misery in trying to fit in with a cousin who doesn't like you, in a country you've never been, Carol is seeing ghosts. Of course, she can't actually tell anyone - it's clear they already think she's crazy... 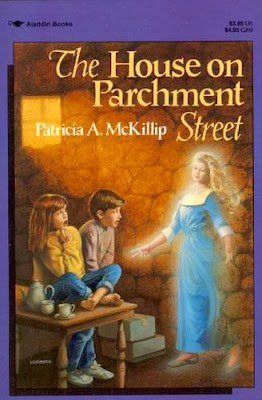 Both Bruce and Carol feel sure that it's going to be a dreadful summer. As it turns out, on some level, they're both right - and both completely wrong.

This is decidedly no romance in this novel - except the romance of history, and the quiet beginnings of a friendship which maybe-perhaps-someday-a-ways-off could become something else. A quirky, charming tale, this doesn't have the typical McKillip feel quite - but given that it's probably her first or second book ever written for publication, she definitely worked her way into her current style. While I'm not generally that big a fan of the traditional "ghost" story, this is a fairly good one. This book skews younger, and is perfect for younger middle grade - 10 - 12 - who like a dose of old-fashioned mystery in the feel of HARRIET THE SPY. It's a quick read for a cloudy Wednesday afternoon.


My copy is an old library selection. Much to my chagrin, I realized just now that Charlotte reviewed this book last summer. Oh, well! Great minds, and all of that.

You can dig around in old bookstores or your public library and find THE HOUSE ON PARCHMENT STREET by Patricia McKillip. It is otherwise a rare find, and not readily available for purchase. Do check Powell's, Alibris, and Amazon.

Oh my gosh--that bottom cover! It looks like the girl has all four legs, and the boy has none!

Just as soon as I get caught up on my TBR pile, I'm going to re-read my McKillips...and I am starting to wonder when her next book will be out....