Let me just start by asking you this: How much more awesome could it get than having the privilege of hosting a guest post by George O'Connor--whose latest graphic novel Olympians title is Aphrodite--ON VALENTINE'S DAY? Answer: I don't know, partly because that question was too grammatically convoluted for me to formulate a reply. In any case, it IS awesome, and we are thrilled to present George's musings on Greek mythology and how we still encounter its traces in everyday modern life. He's a proud mythophile, and we are, too--I still have my well, WELL-thumbed copy of D'Aulaire's Book of Greek Myths from when I was a kid (which my mom helpfully annotated with all the gods' and goddesses' Roman nomenclature, which is an interesting thing to do for a seven-year-old kid, but anyway). George's Olympians series takes a comic-book lens to the classic Greek myths, and those all-too-humanlike deities that bring them to life--and I daresay he may have taken a look at those D'Aulaire illustrations himself. At the very least, his series has the same sort of vivid visual appeal, and I'd recommend it for classroom libraries and for anybody with a love of mythology. Without further ado, some words of wisdom from George O'Connor: 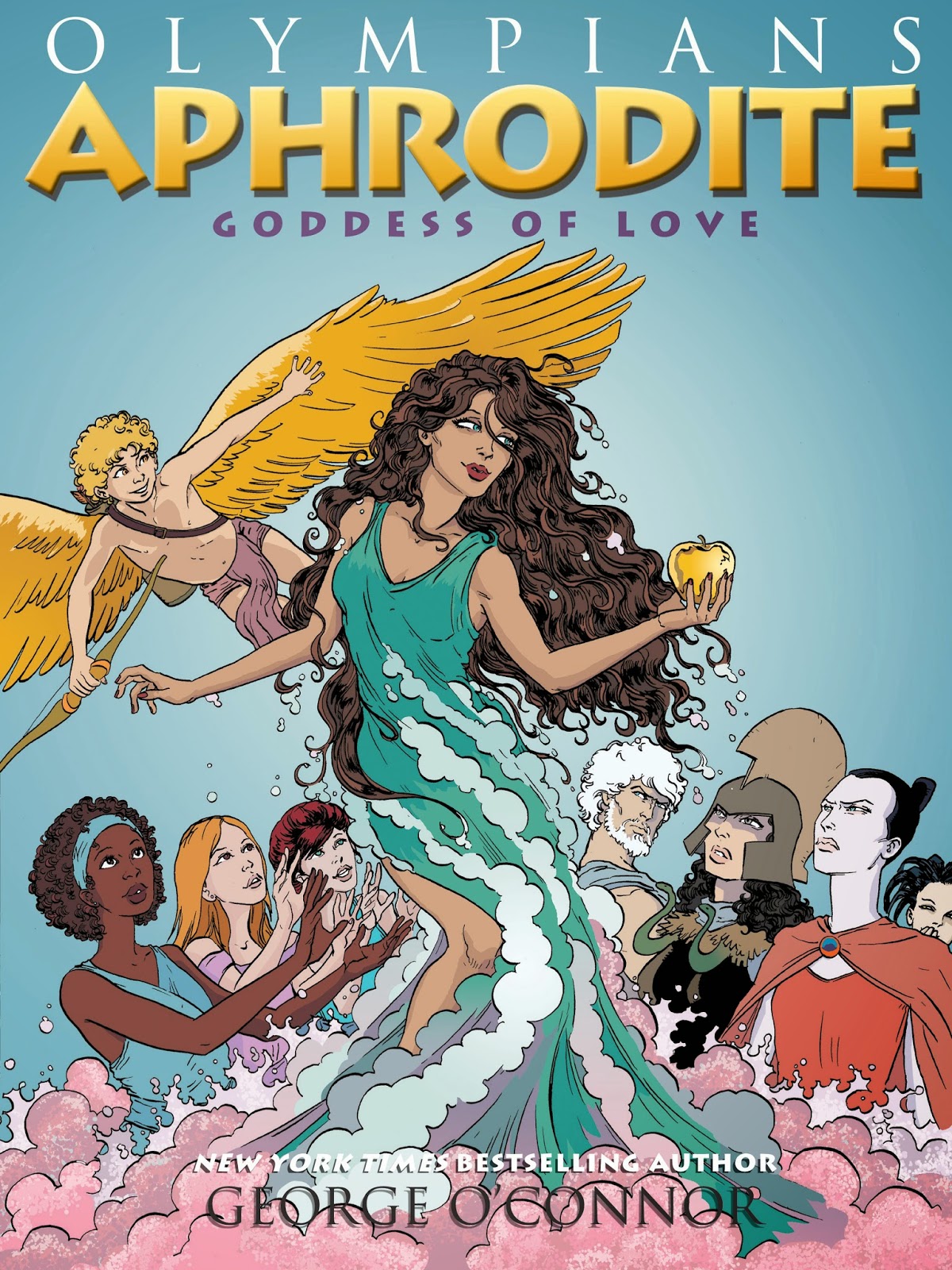 Hello, fellow seekers of Wonderland. My name is George O'Connor, and the gracious Looking Glass people who run this blog have generously allowed my to park my thoughts here today as I continue my blogcrawl of the best book blogs in the biz in support of my new book Aphrodite: Goddess of Love. Aphrodite is the sixth volume of Olympians, my ongoing graphic novel series that retells classic Greek myth in a graphic novel format, one god or goddess at a time.

Tanita, aquafortis and citysmartgirl have also graciously allowed me to choose the topic that I'll be blogging about today, so I figured I'd drone on about the different dialectal approaches to translations inherent in early Grecian mythography and—man, just kidding. Today is Valentine's Day! And I'm on a blog tour promoting a book about Aphrodite! The Goddess of LOVE! Mother of Cupid! Of course that's what I'm going to be writing about.

I'm not going to get too much into the history of St Valentine's day, except to note that one popular theory of how it started has its roots in the martyrdom of a man named Valentinus who was persecuted for performing Christian marriages. It's interesting then that one of the most visible symbols of the holiday today is the image of a pagan deity, the minor godling Eros, or Cupid as we now tend to call him. It's even more interesting to note, for me anyway, that Eros has so thoroughly eclipsed his much more powerful mother Aphrodite as a symbol of love in the modern day. It makes a certain amount of sense, I suppose—Eros is all chubby cheeked and innocuous, a seemingly chaste and innocent version of Love. Aphrodite is a heady concoction of lust and sexuality, a gorgeous sexually mature being. For a creature of Greek myth to have survived through the intervening years of comparatively repressed sexual mores that existed in the Christian era as opposed to ancient Greece, well, the less threatening the better. 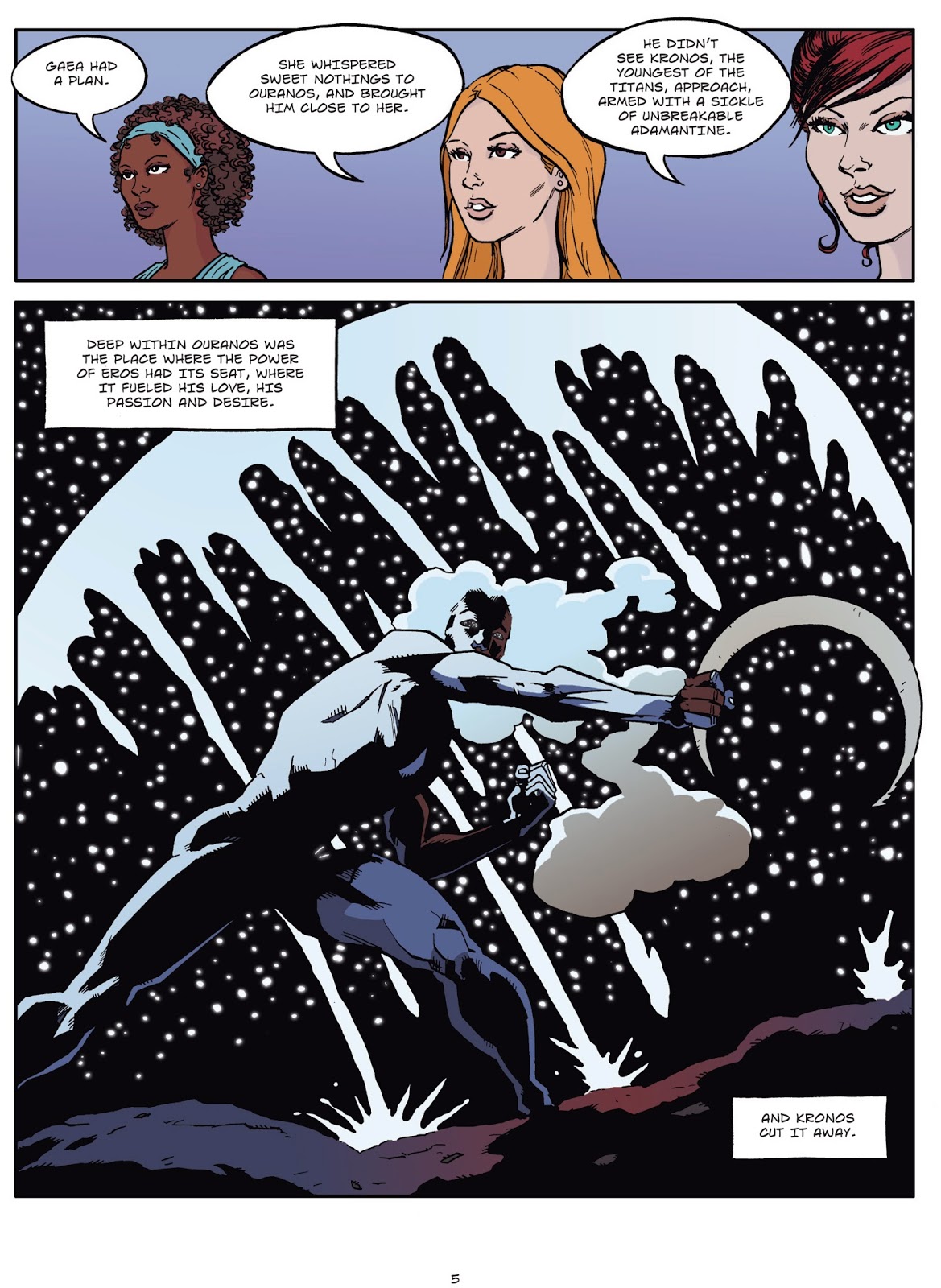 In actuality, I think it's pretty darn impressive that any image derived from a Greek deity has survived the millennia to such a populist degree, so many years after the widespread belief in the gods. Off the top of my head I can think of a few more. Old Man Time with his sickle is Kronos, God of Devouring Time and Father of Zeus. He's normally depicted as a weathered, tired old figure, ready to be replaced by a newborn new year, as opposed to the vigorous child-swallowing Titan of olden times, but there's no denying he's the same figure. The Olympics, currently being held in Sochi as type, began in ancient Olympia as part of a ceremony honoring Zeus. Hospitals and medical vehicles the world over still bear the wand of Asclepius, a rod with a snake entwined around it, the symbol of the god of the healing. Many more institutions of healing bear the Caduceus, a winged rod with two snakes entwined, which is actually the symbol of Hermes—a move befitting the trickster god, who millennia later is still playing his tricks, evidently. Speaking of symbols, our universal symbol for man (♂) is the shield and spear of the war god Ares; lest we think she’s been completely eclipsed, the symbol for woman (♀) is the mirror of Aphrodite herself.

I'll be honest—I'm a complete mythophile. When I discovered the stories of the ancient Greeks as a child a whole world opened up to me—a fascinating wild world filled with monsters and action and sexy stuff. As I grew older, my appreciation of the myths deepened. Not only were they chock full of all kind of cool stuff, but I began to see them as glimpses into a vanished world, a world before our own, but a world which still influences our own, and has served as a blueprint for our whole society. So today, St Valentine's day, I hope that when you send your loved one a bouquet of narcissuses and a card festooned with an image of Cupid, you think back to the original Goddess of Love, Aphrodite, and think how wherever she is, she must appreciate this day.


Thank you to George O'Connor for stopping by and writing up a fantastic post thematically related to what is now Corporate Love Day, and reminding us of the many ways Greek mythology still informs modern-day life; and thanks to Gina Gagliano at First Second/Macmillan for setting this all up. Do go check out the rest of the posts on the blog tour, which includes a couple of our favorite kidlitosphere folks, Charlotte's Library and Dear Teen Me (great posts! go read them! and see a high school picture of George with a righteous mane of hair!) as well as many other blogs.
Posted by Sarah Stevenson at 8:00 AM
Labels: AF, Comix, Happenings, Interviews, Mythology