Most people who know me know that I have nothing but love for Sir Terry Pratchett's Discworld. I will get ALL nerdy going on about Sam Vimes and whether or not Nobby Nobbs is quite...human, and about the snarktastic Granny Weatherwax and Tiffany Aching, and Agnes Nitt... and... um, yeah. I can go on. If you didn't know it, the Discworld is a flat world atop a space turtle called The Great A'tuin. This world is not directly atop the turtle, however - there are elephants involved... suffice it to say that I'm a sucker for populations which live on the backs of turtles, whether they swim through space or seas...

So, obviously, this book has automatic appeal.

Tenjat lives on the shores of Hell, an ocean filled with ravenous naga monsters. His island, a massive Turtle, is slowed by the people living on its back. Only those poor enough to need children to support themselves in old age condescend to the shame of marriage. Tenjat is poor as poor gets, but he has a plan.

In the center of the island rises a giant Tree, where the Handlers—those who defend and rule the island—live. Against his sister’s wishes, Tenjat joins the Handlers. He couldn’t have picked a more dangerous time. The Turtle is nearing a coral reef where it desperately needs to feed, but the naga will swarm just before they reach it. Even novices like Tenjat are needed for the battle.

Can Tenjat discover his sister’s secrets in time? Will the possibility of love derail all his plans for a richer, marriage-free life? Long-held secrets will at last be revealed in this breathtaking debut from M. K. Hutchins. 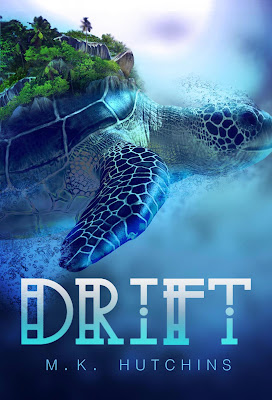 Wait, this island has nagas, those massive cobra-y, snake-y Hindu deities??? - As well as what sounds basically like a Nordic Yggdrasil?? What other traditions can we toss into this island melting pot? Color me intrigued. The title font has great appeal - a vaguely tribal, stylized lettering that makes me think of paths, bones, runes, and maps.

And, of course, there's the turtle. Swimming through what looks both like air, and water... who are Tenjat's people??? Do they have gills???

If you find yourself asking why the name M.K. Hutchins is familiar to you, it's because she's been published in short story form Orson Scott Card's Intergalactic Medicine Show. I said a big, "Ohhh," when I read that on her website. Anthologies are often an emerging speculative writer's best friend. Though the website is fairly low-key, the author does reveal that she studied archaeology at BYU - so, another archaeologist-turned-novelist for Charlotte to check out!

Spring 2014 is looking more enticing every day. Thanks, Tu, for inviting Wonderland to play along with your cover reveal this week!

Ooh! LOVE that cover! And isn't there a creation story from the Onandaga tribe that says the earth is carried on a turtle's back?

There are several peoples who have the turtle imagery in their creation beliefs (and some who believe the world rests on the back of a crocodile). There will be an author's note at the end of the book in which she talks about some of those influences, because they are many. The main influence on that particular element was Mayan culture, as I understand it. (And so happy you love it! I'm so excited for it!)

It's a great cover! I do really like that font. And hooray for mythological elements this week--tomorrow we've got George O'Connor stopping by.