Today's review looks at another one of the Cybils Award shortlisted titles in YA Fiction for 2013. Sex & Violence by Carrie Mesrobian—while I'm not a huge fan of the book's title—was nevertheless one of the four books that were kind of tied for my favorite of the bunch. While I may not have picked this one up solely on the basis of the cover or the jacket copy, it actually blew me away for so many reasons, nearly all of which boil down to amazing writing. 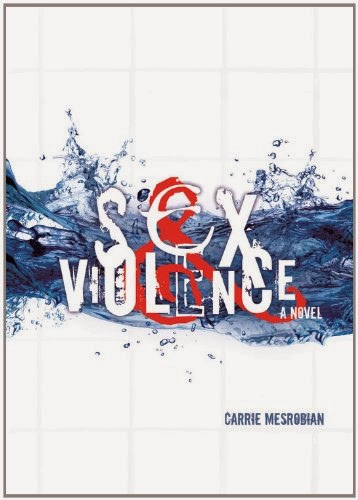 Before I get into the writing, I just want to note that this is an amazing "guy book." (And, perhaps, does that explain the title? Who knows?) I highly recommend it to my friends over at Guys Lit Wire—the narrator had a truly authentic teenage male voice, and I would like to stress that I say that with no caveats whatsoever regarding the gender of the author (I don't believe in that business anyway). Evan is a very REAL character, and his coming of age was thus equally convincing and felt true to life in so many ways. Also, the dialogue was fantastic—female and male characters alike—making each and every one of them individual and visible and audible.

At the beginning of the story, we join Evan only briefly for his "life before," during which we find out he is a bit of a player; then he suffers a trauma which I will not detail for fear of spoilers. The pacing in this first part feels strange, as we go from life-is-a-breeze-with-lots-of-sex Evan to life-is-a-dangerous-place-and-I-don't-know-what-to-do-now Evan; from a high-tension boarding-school setting to a rural lakeside cabin where the newly cautious Evan is forced to deal with his dad and with a whole new peer group. The transition goes quickly, and the majority of the book is about his recovery from trauma, his process of learning about himself and about the others around him, about his father and his family. It's more about the aftermath of sex and violence than the acts themselves; the ramifications and the small things that become even bigger things if we don't deal with them. It's about the real bonds of friendship and love, and how those develop, and how they vastly outweigh the purely physical in what they do for us, how they help us heal and grow. And it's probably just reader greed, but I wanted a little more of Evan Before so that contrast of Evan After would seem even more fully realized.

Regardless of that, every other aspect of the story was impressively fleshed out, particularly the adult characters like Evan's dad—far from being ancillary or an afterthought, his father was believable and imperfect, and had some plot complications of his own, many of which made me (and Evan) wonder if the "like father, like son" adage is really true, or if we can transcend our past and our genetics and become better people.

The one caveat I do have regarding this one is that it IS quite gritty and edgy, and has its share of (believable) teen drinking and sex and drug use and swearing and other shenanigans. So that might make it a better one for older teen readers, and perhaps not one to hand to that precocious 11-year-old advanced reader, depending on one's opinion regarding such matters. Still: FANTASTIC book. I loved it so much more than I thought I might. It's like Sarah Dessen for guys, and I mean that in the best possible way (since I like Sarah Dessen's books)—a story about coming of age, about young people growing up fast, about the bonds of friendship, family, and love, and surviving what life throws at you.

You can find THIS BOOK by This Author online, or at an independent bookstore near you!
Posted by Sarah Stevenson at 12:02 PM
Labels: AF, Cybils, Guy Appeal, Problem Novels, Realistic Fiction, Reviews, Romance