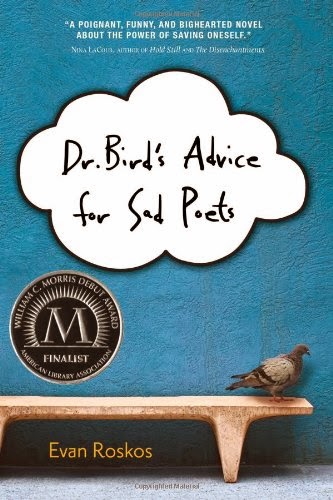 Dr. Bird's Advice for Sad Poets (how much do I love that title? Answer: lots) was one of the Cybils Award shortlisted titles in YA Fiction for 2013. Like the Cybils-winning title, Yaqui Delgado Wants to Kick Your Ass (reviewed here), this one also manages to deal with serious issues using a lot of humor and a character whose neuroses teen readers (and other readers) will find eminently relatable.

James Whitman, the narrator of this book, is funny. Even when he's anxious, or depressed, which is pretty much always, especially now that his sister has left home and dropped out of school, he is quirky and silly and just manages not to take himself TOO seriously—at least, not inside his own head, where he talks to an imaginary therapist named Dr. Bird. Who is a pigeon. On the other hand, when he's feeling good, when it's a good day, he YAWPs to himself, a la Walt Whitman. And he hugs trees. He does that when he's feeling good OR when he's feeling bad. What the author does really well, though, with James, is keeping all of that from seeming preposterous. It somehow works, and instead of being ridiculous and unbelievable, it just seems ridiculously real.

A brief caveat, though: I had a minor issue with the Whitman. Whitman-comma-Walt, I mean. This may well be because of the fact that Whitman poetry was required reading in my high school English classes, but the inclusion of so much Whitman felt "educational" and even, at times, forced. NOT that I don't like Whitman. And I liked it just fine at the time I was studying it, too, and I read a lot of poetry when I was a teen, both curricular and extracurricular. But I found myself reacting to it here by wondering if it would feel, to teen readers, like a vehicle for teaching Whitman.

Having said that, what makes this a great book is the fact that the story, and how engaging it is, transcended my questions about the poetry and its placement. It has humor, as I mentioned. It has suspense, as we follow James in his quest to find his sister Jorie and find out why she left home. It has friendship—James's developing relationship with Beth was sweet and funny, and reminds us that there are times when a caring friend who's willing to reach out is just as important as a therapist (imaginary or otherwise). It has "issues," not just with respect to James and his mental health, but also the various traumas in his family life—all of which take a back seat to him trying to get his sister back where she belongs. This becomes his obsession, even if it's not the best outcome for everyone involved, even if he knows school and home are a problem. Essentially, he places all of his hopes on having her back and everything going back to normal.

Of course, what is "normal"? As James discovers—as we all do, sooner or later, one hopes—there may be no such thing as normal; maybe, in some cases, what is "normal" is not right or good. Maybe what we need is NOT to be normal. In the long run, that may, in fact, be just fine.