This year's Cybils Award winners were announced this weekend! Have you checked them out? If not, go do it—as always, they're varied, exciting, and have that all-important blend of kid appeal and literary merit that the Cybils folks are looking for. Over on the YA Fiction judging panel, we had a lot of fun discussing what that might mean in relation to the shortlist, and, speaking for myself, it was really tough to decide. In my mind, there was a four-way tie regarding which one was my favorite, because they were all so different, and so very good. Ultimately, though, I was very pleased we selected as our winner Yaqui Delgado Wants to Kick Your Ass by Meg Medina. I'd read it last fall, and enjoyed it then, and when I re-read it for Cybils Round 2, I was able to really put my finger on what makes this one a great choice for teen readers. 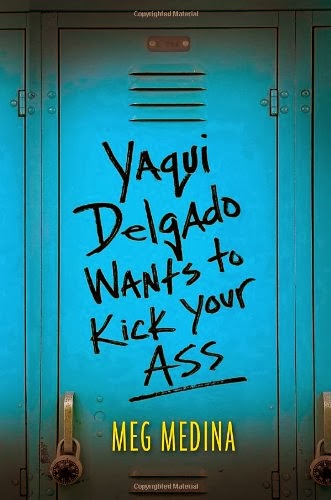 First, though, a run-down on the story: Piddy Sanchez, the narrator, is trying to do her best, to be a good person and a good student in a working-class environment with a single mom who works long, hard hours, but circumstances just keep arraying themselves against her. First, Piddy's best friend moves away. Then, Piddy's mother decides they're going to have to move to a new apartment mid-school year, which not only means leaving behind their best family friend and honorary auntie Lila, but also means a change of schools. And at Piddy's new school, as if it isn't hard enough just to adjust, she finds out one day—rather randomly—that some girl named Yaqui Delgado wants to kick her ass.

Why? Who knows? (Though we eventually find out it's Piddy's newly developed, righteous curvaceousness—allegedly she walks around shaking her ass.) And who is Yaqui? Piddy has no clue. But this initially random threat sparks off a chain of events that challenges Piddy more and more, forcing her into situations she doesn't want any part of and threatening to make her into someone she hardly recognizes. Meg Medina takes a story about difficult circumstances, about having to work your hardest just to survive, about bullying and about being the new kid—frankly, a story that could easily be categorized an "issue book"—and makes it so much more than that. Serious subjects are handled not just with sensitivity but with humor. I laughed out loud many times during this book, just because Piddy's outlook on life is so hilarious sometimes. She's a very sympathetic narrator, self-sufficient and a good person, which is why it's so wrenching to see her situation change, to see her lose the ability to see the humor around her, as things become all too serious.

As she fights against the fear that threatens to take over—will her best friend forget all about her? Will Yaqui ever leave her alone? Will her mother keep working herself to death?—Piddy's happiness and her school performance start to suffer, understandably. Her dreams take a backseat to day-to-day survival. Luckily, though, she's got allies. She isn't alone, and I appreciated that aspect of this story: the adults are NOT oblivious to Piddy's problems, and Piddy, while she wants to handle things herself, she does have people she can rely on. Those adult characters are well drawn and realistic, three-dimensional people in Piddy's life. Her mother; their friend Lila, who is one of Piddy's staunchest allies in the whole mess. Though she constantly searches for her absent father, the family she does have is plenty enough, and they stand by her.

And then there's Joey Halper, the kid-next-door from their old apartment, who's one of the few people who really understands where Piddy comes from and why it's so important to her to survive this and live to fight another day. Though some of Piddy's peer relationships are not as fleshed out, her alliance with Joey is a believable one, and welcome, as she tries to also navigate the line between friendship, love, and need. There is so much going on in this story that it could easily seem too "busy," too crowded, but to me, it never did. All the threads were deftly handled, and ultimately, Piddy comes out the other side of things more grown up, not entirely unscathed, but with her dreams more or less intact.

Oh, and isn't that a PERFECT cover? Just sayin'.

You can find Yaqui Delgado Wants to Kick Your Ass by Meg Medina online, or at an independent bookstore near you!
Posted by Sarah Stevenson at 11:47 AM
Labels: AF, Class and Identity in YA literature, Cybils, Humor, Multicultural Fiction, Problem Novels, Realistic Fiction, Reviews