CYBILS REVIEW: When We Wake, by Karen Healey

I was shocked when this book wasn't nominated first out for the Cybils. Published in March of this year, it was discussed as a disturbing book by a lot of SFF blogs - and, while disturbing and post-apocalyptic go hand in hand, there were probably a lot of people who couldn't shake off the chill of a book on cryogenics to discuss it further.

Also, it's just heartbreaking, in some spots. As in, I could not cope with this heartbreaking. Karen Healey does here what she does best, drag the reader backwards into all kinds of emotional questions, and then, leave them gasping, with answers they must come up with themselves.

Fans of books like THE SUMMER PRINCE, by Alayna Dawn Johnson, THE WATER WARS, by Cameron Stratcher, ARTICLE FIVE by Kristen Simmons, and THE CARBON DIARIES by Saci Lloyd will some similar themes in this novel. Some people have felt it's a readalike for Beth Revis' ACROSS THE UNIVERSE. Um... no. Karen Healey's organic inclusion of diversity is masterful; someone mentioned they'd read this novel, and there were "a couple of Muslims" in it. The characterization is subtle, but there are also two Somali boys - love interests, several Muslim women, lesbians, and a transperson, as well as characters of a variety of ages, cultural understandings, and beliefs.

But, did I mention that it's sad? Not sad, as in tissues-required. It's sad, as in, twists-your-gut-rips-at-your-heart-but-leaves-it-beating/bleeding. Because, the main premise is that, once upon a time, there was a girl who had everything... and then, it was gone...

Concerning Character: True story: I started this novel twice. I couldn't read it the first time I started it, because, people, there is a such thing as Dystopia Overload. I took a Happy Book Break so I wouldn't run into traffic, and tried again: Teeg, as Tegan likes to be called, is sixteen, finally, finally getting all the signals right and the cues lined up with her brother's best friend, finally on the way to having the boy she's crushed on since forever. She's going to a protest with him, and her pushy best friend, doing her bit for the environment and all she cares about. She does care, too -- she's just starting to imagine a world beyond 2027, and it feels good. So much feels good... 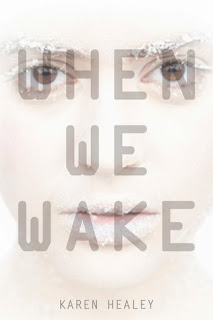 And, when she wakes in 2127, everyone she felt good about, and felt good with is gone, and she remains stranded in time. That's not the worst part -- the worst part is that social media has über-morphed into this gaping maw of constant updates and flying cameras and everyone in the world wants a piece of the Living Dead Girl, feels like they own her, and are perfectly okay to dive beneath her skin and ferret out her every thought. Caged, frantic and grief-stricken, Tegan she wants to have her life - or her death - back, and her privacy. Worse, because she put that little sticker on the back of her driver's license, her body belongs to science - in the Frankenstein sort of way. As in, they own it. Teeg argues that she gave her dead body to them, not her whole life, but the military has different ideas. MUCH different ideas. They're exploring cryogenics, to explore resurrecting combatants killed in action. That's creepy enough, but Teeg is able to dismiss that. After all, her father died in the war. She would have done anything to see him live again. It's a good cause, donating your body for science. In spite of everything, the lack of privacy, the batteries of tests, the hordes of doctors, the grief, the fear, the constant, invasive, grinding pressure - Tegan is glad she did it. Usually. Mostly.

Of course, not everyone agrees. There's a religious cult who feel that Tegan's soul has left her body - and that she needs to embrace returning to the embrace of God through suicide. As a devout Catholic, Tegan is not about to suicide - but she's also a little scared about the state of her soul. (And here Healey scores on diversity of thought - Tegan crosses herself and goes to Mass, though few in her new time understand her actions, or even believe in God). Anti-military folk protest Tegan being resurrected before their solider children, and critics of environmental waste aren't sure that a country who turns away refugees from all over the world have the necessity to be resurrecting the dead. After all, there are enough living and precious few resources for them on the overcrowded and polluted planet already. Tegan would have been fine if the stress and questions she encountered came from outside of the organization who had revived her -- but some of them didn't. There is something going on that isn't quite... right. Her bodyguard silenced a man who said something about an Ark...

All Tegan wants is the truth. If no one else cares, her one goal is to tell the truth ... no matter what it takes.

WARNING: Do not fold, spindle, or mutilate. The creepy cover of this book will haunt you. Creeptastic totalitarian governments are not as far away as 2127. It is hazardous to read while driving heavy machinery. Walt Disney's head is not frozen in a cryogenic freezer. Do not await the tech for this with baited breath. Your mileage may vary.


You can find WHEN WE WAKE by Karen Healey online, or at an independent bookstore near you!

Yikes! This one does sound scary. I really liked the other books I've read by her, though. Another one for the post-Cybils list!