Okay, so I may have gone on and on and ON last year about Losers in Space. I had a lot of love for that book, and wanted to thrust it into the hands of everyone who loved space colony space opera and wanted to read more of it. Now, an unexpected book joins the ranks of TUNNEL IN THE SKY and STARSHIP TROOPERS, by Robert Heinlen, ACROSS THE UNIVERSE, by Beth Revis, EARTHSEED, by Pamela Seargeant and LOSERS IN SPACE -- HORIZON.

Unlike the fools on LOSERS IN SPACE who stowed away on a ship just for something to do, these guys have NO intention of getting in the way of trouble. Trouble finds them, while they're just living their lives in whatever fashion. However, like the LOSERS IN SPACE crew, they soon discover that what happens after the attack is up to them:

-- Demure, obedient Sun and her family are simply going to their new home in Zandia Colony - aboard the Day Wanderer, on their way to the glorious stars, where she's always wanted to go. Never mind that her mother is too strict and demanding - her father is going to make this trip, and hopefully, the rest of their lives, an adventure.
-- Minnesota has always loved knocking around the old grounded colony ship, The Horizon which brought she and her family to the New Paltos colony. She's quick, smart and hyperactive, and it's a perfect outlet. 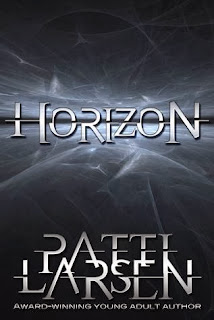 -- Sammel is always in trouble, always disappointing his Captain father - a loose cannon and one step from disaster. All he wants to do -- just once! -- is impress the old man, and let him know that Archer's not his only kid. But, this time, the disaster isn't just a little dent or a broken vase - it's unprecedented. And, no matter what anyone says -- he's sure it's all his fault.
-- Quinn's alcoholic miner father has worn him to the bone. He just wants something better -- something good and worthy, like what the family was after when they came to New Paltos. But, it seems like there's nothing left for them.
-- Archer has known all his life that he's going to take over for his father, and follow in his footsteps. He couldn't be prouder than the day he got his uniform and his father brought him up to the bridge of the Day Wanderer. But, his father wants him to take care of Sammel -- his disaster of a little brother. Archer tries hard to be perfect, and it galls him that Sam doesn't even seem to care.
-- Miguel's father might be satisfied with just being a New Paltos miner, but Miguel is meant for a better life than this. Somehow, he'll get there. He's smarter than anyone on this backwater colony, and someday, he's going places.
-- Brownwyn knows that Earth will always be superior to any of the stupid little backwards colonies her father drags her to - and if she can't find any decent conversationalists, at least there's always her old friends, booze and coke. Even hung over, she's still a princess -- and everybody had better recognize that.
-- Manuel is used to being thought of as big and stupid, especially by his twin, Miguel, but Minnesota's always been kind to him, even though she's so fast and smart. He's only brawn and no brains, good only for being a miner. Manuel knows he'll never get to the stars - but he can dream...

They're different ages, from different backgrounds, and have different goals. But, when the Day Wanderer is attacked, and all that's left is a handful of colonists and the few survivors from the ship, their only hope is to pull together -- or lose everything they ever hoped for. I love novels like this - the "eight kids save the world" thing. This is a well-characterized, well-paced and entertaining indie novel for fans of the Lost In Space genre. While it stands alone on its own, with the way it ended, there's even room for a sequel!


You can find HORIZON by Patti Larsen online, at various ebook retailers. Just follow the link!

YEEESSSS. I am kind of into space colony fiction these days, so I'll have to look for this. Sounds like a perfect summer binge read.