There's a lot to be said for tropes in YA lit, and one of the biggies is "insta-love." In novels where there is a lot of action and less characterization "insta-love" is a handy fictional tool to step over those messy, emo high school relationships. No need to explain why a character likes another character, they just DO all right? This book touches on instant attraction with a little twist: perhaps the ultimate freakout would be not being in high school, not in any normal circumstance, anyway, and still somehow be party to the emotional puppetry and nonsense of the group emotional dynamic which is high school. Imagine being completely at the mercy of "insta-love" because of some who-knows-why life quirk.

Oh, yeah, and imagine four guys living in the basement...

Anna's father is a scientist for the Branch, and the guys who live in the basement - in unbreakable plexiglass-type cells - are her genetically engineered-maybe-super-soldier friends, kind of. She discovered the guys in the basement when she was thirteen - and has been their biggest fan ever since... especially Sam's. He's amazingly gorgeous and Anna's now seventeen, and dying to know how he feels about her. Of course, logically, he should feel "jailer" about her, and to a certain extent, that's touched on in the novel, but Anna is impervious to the weirdness of crushing on someone jailed in her basement, and Sam is ... remarkably patient with her fangirling on the other side of the glass, her visiting him in the middle of the night, and her trying to catch a glimpse of his tattoos. The novel does not spend adequate time on characterization - the boys are essentially ciphers with a single defining quirk - one eats a lot, one is grumpy, one is the best buddy, and one is the love interest. (They're like the four dwarves: Grumpy, Hungry, Buddy, Sexy.) Additionally, Anna doesn't really have a lot of depth, either, nor basic curiosity about what's really going on in her house, or what goes on in the larger world. With the exception of her hated self-defense courses, Anna's home ALL DAY and must stay upstairs most of the day. She has little or no contact with the outside, her mother is dead, and her father is completely indifferent, except for their once-a-week lemonade and sugar cookies date. I have to say that if I had a parent who ignored me except for an awkward little interlude for cookies, I might be tempted to, I don't know, skip it and look online for how to get some kind of emancipation, but Anna is in a weird state of contentment. We're told she wants to leave. She dreams of a life away, but... well, there's Sam. And Trevor and Cass and Nick and all, yeah. But, Sam... [insert dreamy sigh] 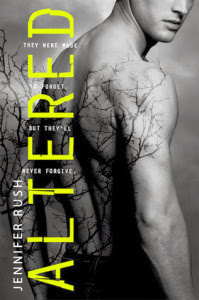 Readers may be surprised that Anna hasn't endlessly questioned her father, broken into his files or become an exppert on genetic modification. She seems content to check her curiosity at the door and just do her father's paperwork and assist him in his tests or whatever on the four hulking boys living in a high-security lockup in her basement -- despite obsessing hard about one of them. Like the other boys, Sam has no memories of life before the last five years of being incarcerated in Anna's basement, and she doesn't seem to be at all curious as to why her father is running blood tests and taking data about these boys. Whose projects are they? What does the Branch intend to do with them? When a couple of the suits from the Branch lab make a surprise visit, the time for questions ends in chaos and gunfire. Anna gets caught up in it all, and her father tells her to go -- with the boys who have masterminded an amazing escape. As they run, and are chased, Sam works hard to remember who they are, why they are, and what the lab wants from them. Memories bring up tragedies and betrayal that none of them are ready for -- but there seems to be no time to do anything but run. And run. And hide some. And steal kisses. And run some more.

Though I as a reader had some serious questions about this novel, I kept reading. Why? Because it was enjoyable in the way that kettle corn is - an light, semi-sweet indulgence. It's a fast-paced page turner that requires a lot of belief that the sequels are going to do the work of explaining a lot of the "Why?" the first book didn't cover. I found Anna's personal breakdowns about her mother - in the midst of the boys' bid for freedom - to be a little difficult to swallow. She certainly isn't the only one experiencing the pain of being lied to, and, hello, people with no memories have had to KILL other people, can they get some emo time, too?? -- but she carries on about it, and sort of forces everyone else to deal with her drama. Readers may also have a moment of horror about Anna's other long lost family members -- and the fact that she's basically a replacement is not even touched on, but again, we can assume that the sequels (next up: ERASED) are meant to lay a bit more groundwork in terms of characterization and delving deeper into the whys of the plot that got missed in the first burst of action and drama. At least one hopes.


I received a copy of this book specifically for the Cybils Awards. You can find ALTERED by Jennifer Rush online, or at an independent brick-and-mortar bookstore near you!