We rolled our eyes and laughed at the classics retold with zombies. We rolled our eyes some more at Anna Karenina as an android - that certainly explained the whole Keira Knightly movie. But... Star Wars is touching some pretty sacred cows. And Shakespeare?!?? Honestly? I'll tell you that right up front: I am PICKY AND DEFENSIVE about the Bard, man. I have sniffed at a modern jazz musical on A Midsummer's Night Dream. I have narrowed my eyes at Shakespeare in the Park. I was NOT prepared to like this book AT ALL. I am not down with making fun of Shakespeare -- nor am I really down with making fun of Star Wars. Making fun of both at once?? Get thee behind me, hater.

To my surprise I discovered: this book isn't a joke.

CHORUS:
Now flies Luke off in his landspeeder quick
And finds his home engulfed in flames of red,
The spies amidst the smoke so black and thick,
The bodies of his aunt and uncle, dead.
A sadder, wiser man he cometh back,
With noble purpose now his life's imbu'd
By wrongful, vicious cowardly attack,
The Empire hath Luke's passion quite renew'd.


... LUKE: A Jedi I shall be, in all things brave --
And thus, shall they be honored in their grave.

Soo, this ... STAR WARS as Shakespearean play thing. Not a joke.

It HAS jokes - in jokes, yes, like Shakespeare does. It has Star Wars jokes, in places where true fans have rolled their eyes at the movie. (Actually Hans Solo at one point sighs and says, “’Tis though I just have said thus—even I/From time to time have boarded been. Dost thou/Believe that e’er I had the choice? [aside:] Aye, true/It sometimes seemeth I repeat myself.” - which I have to admit made me smile.) It has humor and drama and really shows the structure of the original film -- the Hero's Journey, and how closely it models itself after some of Shakespeare's heroes. This felt a lot like Hamlet in spots (not just because of the woodcut style artwork, featuring Luke holding up a stormtrooper helmet, a la "Alas, Poor Yorrick.") - but because of the dark and determined soliloquies and the adventure aspect - a young man who wants to go out and change the world, but first, he has to deal with the evil deeds of the past -- it's all there, the Big Story that makes Star Wars - and Hamlet and the like - great. 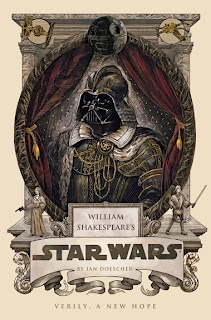 The illustrations are a hoot - somehow transmuted from movie stills into old-fashioned sketches of Lords and princesses and soldiers from afar - and while there aren't many, there are just enough to add a little pop of interest in the right places. Aside from the "Yorrick" pose, my favorite one has to be the portrait of Darth and his burning... er... globe. And, can we take a moment to talk about the cover? The primary characters and their symbols are all represented - and Darth Vader's collar and chains of office are really reminiscent of Elizabethan portrait. The helmet with the high, stiff collar sticking up behind it is just perfect.

Of course, it's not as if we have to actually, you know, read this to find out the story of Star Wars. We know, of course. One of the things that makes this book such a hit is that we know the lines of the film by heart by now - most of us, anyway. It's not as if we don't know what happens, but, author? poet? playwright? Ian Doescher knows the Star Wars tale well enough to play with it, AND, he also knows Shakespeare well enough to mimic the little Shakespearean in-jokes, the dramatic language, the iambic pentameter, which in itself is quite a feat. He also doesn't take his little project seriously -- he ups the drama in the Sith Lord's soliloquies and gently mocks the green and over-eager Luke.

There's an afterword that talks a lot about Joseph Campbell, the creator of the Hero's Journey, and how closely George Lucas' original storyline hews to his theories. It's an interesting little find for anyone who is after yet more Lucas storytelling.

This is a seriously cute book, and a perfect stocking stuffer for the SERIOUS Star Wars geek in your life. They'll give you stink eye, at first, no doubt, but it's really, really well done, and clearly a labor of love. Well done enough so that serious Shakespearean don't feel mocked, and serious Star Wars fans feel that honor is being done their favorite story.

Rumor has it that The Empire Strikes Back is next for this Shakespearean-ization. Online at Quirk Booksthere's a study guide, so teachers can use it, and an author interview as well.

WARNING: Readers of this book will be tempted to act it out -- and do voices. Do not read while operating heavy machinery. Not everyone can be Princess Leia. All actors must take turns. "Help me Obi-wan, you're my only hope" sounds better in iambic pentameter.


I found my copy at the library. You can find WILLIAM SHAKESPEARE'S STAR WARS: VERILY, A NEW HOPE by Ian Doescher online, or at an independent bookstore near you!

We own a copy of this at the library, and I had to pick it up as soon as I saw it and, yes, I immediately wanted to act it out.

I know!!! It has line numbers!! It made my little geeky English lit heart pitter-pat.

I adored this book! Only someone with a deep understanding and love of both Shakespeare and Star Wars could have written it.