CYBILS REVIEW: The Chaos of Stars by Kiersten White

With the exception of the awesome Theodosia books and a recent Esther Friesner duo, I hadn't seen any newish YA tales that deal with the labyrinthine relationships of the Egyptian gods. Given the whole incest/fratricide thing (chopping your brother into fourteen pieces...? Nice), maybe they're not the best topic... but Kiersten White's THE CHAOS OF STARS gives it a shot anyway.

I love the cover of this book - the sort of bronzed looking font over the backdrop of glitter-on-black is elegant and eye-catching. However, I had trouble connecting with this story because Isadora is meant to be an Egyptian - but she's the most generic and culture-free Egyptian you'll ever meet in fiction. We get no sense of where she's from, what her life/home is like (I mean, she has a TOMB, for heaven's sakes) and the smoothness of the transition between that life and San Diego is far too uneventful. Further, the novel is framed as a destiny-driven love story, and the inevitable romance with The Cutest Boy In The Whole State (who is also the most ridiculously patient) is front and center, but the protagonist's struggle with the idea of owing her parents worship, her fear of living in the present, and her inability to comprehend the scope of a mortal's lifespan could have been developed more, to deepen the plot and slow the pace, and to help make the rest of her struggles more believable.

Concerning Character: Sixteen-year-old Isadora sometimes feels like just another in a line of Mom clones. Her mother, Isis, has named every one of her daughters after her in some variation, and while once, that was something delightful, now Isadora feels it's just another example of smothering mothering, and Isadora is determined to be nothing like her mother, and nothing like her family, at all. 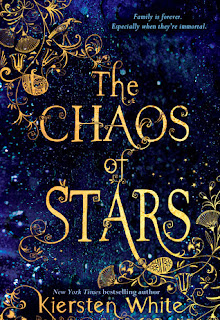 Her family, it must be said, is kind of nuts. It goes with the territory, being Deities. Her Uncle once murdered her father - and her mother resurrected him. Her uncle still comes over weekly. Isadora's aunt follows her mother around like a timid, dark shadow. And, her son, Anubis... wow, talk about not right in the head. Isadora's always known that her mother's attention span is short where she's concerned, and lately she feels like she's going to be pushed out of her whole life. When her mother's crazy dreams convince her to send Isadora to live with her brother, Sirius, in San Diego, she's over the moon. Even finding out that her mother has arranged a job for her, as a volunteer docent for a small museum can't dim Isadora's joy.

At last, Isadora is free, free, free to live the way she wants to -- even free to crush on the gorgeous, blue-eyed poet, Ry, if she wants to. Not that she's interested - Isadora knows how short love lasts. Her own mother has lost interest in her; there's no way Ry's really serious about her. She's not falling for that again.

Even far from home, glimpses of the past haunt Isadora. Avoid it as she might, home and family are still at the forefront of her mind - and in her subconscious. When she finally pays attention and stops being vexingly petty and angry, it's almost too late...

While not a favorite of mine, this might be an entertaining novel for someone who isn't at all familiar with Egyptian myth, and likes a Meet Cute story with plenty of gorgeous people in it and wants to read it on a beach.

More Egyptian myths in YA lit can be found here.

You can find THE CHAOS OF STARS by Kiersten White online, or at an independent bookstore near you!
Posted by tanita✿davis at 1:43 PM
Labels: Cybils, Fantasy/Sci-Fi, Reviews, TSD Review

I miss being part of the Cybils this year but these reviews really help me stay connected.

@ campbele~ I'm really glad - I hope that you come back maybe next year - some of us oldies are ready to take a break!