CYBILS REVIEW: The Cadet of Tildor, by Alex Lidell

Let's think together a moment: what is it that makes a Tamora Pierce novel?

Strong female central characters. Diverse gender, ethnic and ideological backgrounds. A fraught political scene. High stakes, and an underdog nobody believes in, who is willing to make bad choices, fall, swear, and bleed before getting up again, and saving the day. Check, check, check.

With the exception of any diverse in characters, and more a focus on action and emotion than history and worldbuilding, this could almost be a Tamora Pierce novel. Having read the author's bio, and realizing that the ALANNA books were her first foray into fantasy in English, I'll say that this is a tribute novel - I find that a more positive descriptive word than "derivative." If you love the novels of Tamora Pierce -- pay attention.

The smoky orange sky on the cover, depicting a city on fire, and the cut, scraped and scarred hand and arm of a warrior with a glinting sword is both unisex enough and tough-looking enough to make this a win for everyone.

Concerning Character: Renee de Winter is a senior at the Academy of Tildor - having come through to this point in her school career expressly against her father's wishes, through the sweat of her brow and the skin of her palms. She believes strongly - so strongly - in the new king, and all he stands for. She sees what's been happening to her kingdom -- the extortion of the Family vs. the rapacious violence of the Vipers -- and she wants in on his war to change things. 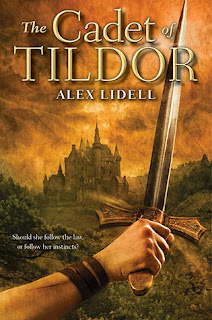 Problem: the old king new king is young and impetuous, and the things he's doing to change the kingdom - well, his war against the crime families whose thugs sell drugs and force extortion onto the citizens is a violent and difficult war. The crime families are fighting back. People are dying. And, the rot is spread further in and further down than anyone could have guessed. Renee thinks that hope has come, when an elite soldier is pulled from active duty to be an instructor at the Academy of Tildor - but he's resentful and infuriated to be pulled away from where he could help -- and his students are going to pay for it. Especially that upstart girl who thinks she's strong enough to play hardball with the big boys...

Renee is at first hurt, then resentful and her best friend, Alec, is furious at the unfairness -- but Renee's heart is for the kingdom of Tildor. And she'd do anything to save it -- whether against the law or not...

This book is complex and full of bigger thoughts that you might expect from an adventure novel that feels a lot like coming home to a more updated version of the Alanna books. The worldbuilding and political structure of Tilder is very well done, possibly reflecting the author's master's degree in International Peace and Conflict Resolution. While this novel - HURRAY! - stands quite well alone, with a beginning, a middle, and AN END, the author has wisely left a few open spaces to allow the reader to return to this story and see What Happens Next, and rumor has it that she's working hard on a sequel. It's not a necessity, but there's room for it, and many readers will find themselves glad to see more from this debut author, as she makes her own way, and finds more of her own voice.


I've read a library copy. You can find THE CADET OF TILDOR by Alex Lidell online, or at an independent bookstore near you!

Right! Here's one I've got to read...cannot resist the Girl Proves Herself as Warrior trope...