Okay, is it me, or is EVERYBODY totally forgetting everything in YA fiction these days???

Cat Patrick's FORGOTTEN was another Cybils nom on amnesia a couple of years ago. I just reviewed ALTERED by Jennifer Rush. Let's not forget the whole MAZE RUNNER thing, by James Dashner. THE ADORATION OF JEMMA FOX(Mary Pearson), THE UNBECOMING OF MARA DYER (Michelle Hodkin), and even further back, BEFORE I FALL (Lauren Oliver) and Kathleen Duey's SACRED SCARS books. Apparently, waking up completely futzed on who you are and what you're supposed to be doing, while being in some kind of fraught circumstance has become Really Normal for a lot of people.

Gotta admit, it's a great plot contrivance. The stakes are sky high, and everything - every little look, nod, flicker -- everything matters the most.

The tagline "Survive One World. Save Another" on the cover of this gave me a clue that this would be high adventure. Unfortunately, the first thing the cover indicated was DUNE! DUNE! Oh, my gosh, someone's trying to retell DUNE!!!! Um, no. The presence of a giant, maw-mouthed, rings-of-teeth worm-like thingy, rising from the Arrakis-type desert-y earth is not at all indicative of Frank Herbert's novels, nor does it indicate the presence of anyone with the last name of Atreides, nor is it even weakly reminiscent of the movie, Tremors. Sorry. I know you're all disappointed. The paperback cover might help you feel less like DUNE or Tremors should be involved - a disembodied face, a sandy desert looking place, and people walking doesn't necessarily scream "Adventure!" but it's at least not confusing me with worms.

I read the conclusion to this novel once -- then again -- then again. And, I'm ...still confused. A lot confused. There was potential and so much drama built up here that it may just be that I'm kind of a hard science idiot (hi Mr. Plubell and my Junior year Chemistry C-!) but I don't get how the logical leap occurred from, let's just say, one part of the novel past to the future, from the internal to the external. I'm not sure reading it again will make a difference, either. If anyone else comes up with a different take on the conclusion, I'd be glad to know it.

And now, onward to the book:

When she wakes up in a room filled with flashing lights, she's alone -- and plugged into ...stuff. Needles have fed her and little catheters carry away her waste. She's stiff and sore and -- just ... awake. In a suit and boots. Standing in a ... room thingy, filled with panels and buttons that she pushes. And... a nametag. Okay, she's got a name. Ana. And she's... somewhere. With a countdown clock strapped to her wrist. And, twenty-eight hours to get somewhere and do something before... something else happens. Right. 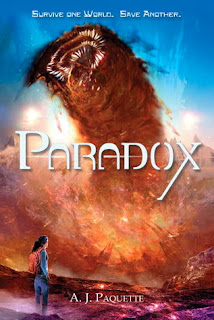 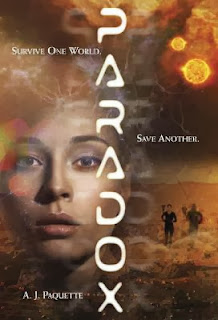 Eventually, Ana figures out she's on a planet, and has just landed. A brief note contains instructions as to what to do next, but not many. The weird thing is, she has body memory, muscle memory that propels her along the way. She opens the spaceship door and comes -- face to face with... death. Of course, not knowing who you are or what you're doing, you're bound to be eaten for your ignorance the first second! However, she's saved by a boy in an identical space suit, and together, they embark on their journey across the planet Paradox.

There are losses along the way. Inexplicable losses. There are unsettling discoveries - like the ginormous, ring-toothed maw-of-death worm. There are also weird flashes - or ribbons - of memories that don't belong to Ana, or anyone she knows. The confusion lasts nearly the entire novel. In the last third, All Is Revealed. And, I'll not hand you spoilers, but the twist wasn't surprising to me, and it might not be to you. How Ana pulls it out of the fire and saves the world - because she has to, it says so on the cover -- is what was harder for me to understand. I wanted to, and I wanted very much to be able to suspend disbelief for this novel, but I couldn't.

STILL: this is a fast-paced page-turner, and if you don't have to understand the science behind the novels you read, you might just enjoy this one.


A copy of this book was sent to me courtesy of the publisher for the Cybils Awards. You can find PARADOX by A.J. Paquette online, or at an independent bookstore near you!

Hmm...I always have to know the WHY. That kind of thing tends to bug me. I'll keep that in mind if I run across this one.