I'm not really a fan of angel fiction -- being raised in the belief that angels aren't fictional - nor am I particularly a fan of demon fiction, same reason. It's a little weird that I picked up this book (from the LIBRARY, FCC, thank you), then, but I've been known to toss out all of my "I don't like..." rules when I feel like it -- because I can.

Reader Gut Reaction: A fast-paced adventure with attitude and humor, The Demon Trapper's Daughter had a couple of surprises and twists, but overall a fairly familiar framework, which, when you're reading for sheer entertainment, is a good thing. There was a slight air of predictability - I knew a couple of things that happened were going to happen -- but there were also a couple of twists which I didn't see coming -- also good. Jana Oliver managed to snag my attention and keep it, which proves me right again about throwing out my "I don't like..." rules and reading what strikes my fancy. Score another point for not judging a book by the cover or the title and stated content.

Concerning Character: Riley Blackthorne is an apprentice demon trapper in Atlanta. Please note, not demon hunter - demon trapper. She carries around Holy Water and sippy cups into which she bags and tags the little creatures. Demons, in 2018, are just part of the norm, and like an exterminator, Riley and her former history-teacher Dad are part of the solution to the outbreak. 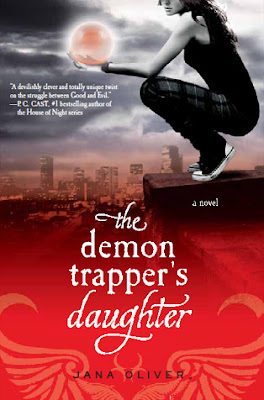 It's not an easy life - as Riley soon finds out on a solo run. Even when you do everything right, you're dealing with an intelligent pest, and things can go bad quickly. It's even worse being seventeen and also trying to go to school - in a manky former grocery store - and having friends whose parents are in normal professions and who don't understand what you're into.

There are a couple of people who know the score. One is Simon, a twenty-year old apprentice to a nasty trapper named Harper, whose fervent beliefs and kindness to Riley make her appreciate his gorgeousness all the more.

But, most of the time, it's just Riley and her loving but tough Dad -- and her Dad's partner, Beck, who is a smart-mouthed, taciturn, bossy pain in her behind. Once upon a time, she had a mad crush on him, but she was fifteen. He shot her down pretty painfully, and since there's a fine line between love and hate, Riley prefers to stick with the hate, even though it's been years since she got over him.

There's something weird going on in Atlanta, though, something that even old rivalries and hatreds have to play second fiddle to -- the Trappers will all need to stick together. 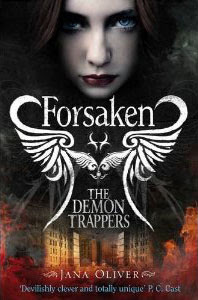 Recommended for Fans Of...: The Devil's Kiss by Sarwat Chadda and Strange Angels by Lili St. Crow - and any novel with a tough girl who carries a weapon and Deals Deadly with evil.

(Despite the well-lined eyes on the British version of the novel, and the new title of Forsaken, this isn't a Gothic or even a Goth-y novel - this is a Tough Girl Kicks Behind And Sometimes Wonders About the World novel. Don't know where they were going with the pale-n-pouty look and the swirly tattoo, but it doesn't work for me.)

Themes & Things: Well, you've got your demons. And then, you've got your angels. Basically, it's good vs. evil, us vs. them, and dark vs. light. On the other hand, there are those gray areas -- necromancers, who feel the dead just ought to earn their keep -- some of them aren't necessarily evil, just walking a line that others don't see; then there are the angels, who seem to not be jumping in and helping out the trappers. Aren't trappers the Good Guys? What's the hold up? And about those trappers... some of them, like Simon's mentor, Harper, are plain mean. If you're doing the right thing for the wrong cause, are you right after all?

The subtle play of light and shadow is what separates this book from just being a rip-through-and-douse-things-with-Holy-Water type of book. Like the questions Buffy came up with after years of slaying vampires, gray can become more than an "area" in a decision; gray can become a way of life... 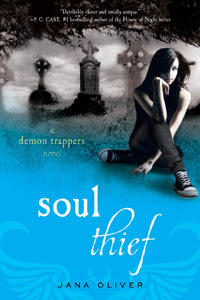 Authorial Asides: Jana Oliver has written short stories and is author of the Time Rovers® time travel series for adults (which I may have to track down). This is the first novel in her first YA series (heads up for people looking for author interviewees).

And lucky you - if you hurry, you can make it through this novel and be just in time for the sequel -- The Soul Thief -- which is being released August 30th. So, get a move on!

You can find THE DEMON TRAPPERS DAUGHTER - and soon its sequel - at an independent bookstore near you!
Posted by tanita✿davis at 4:05 AM
Labels: Fantasy/Sci-Fi, Reviews

Not really a fan of angel/demon fiction either, usually, but this one sounds intriguing. I like the fact that it seems like the focus is on character/relationship dynamics as much as on action and bells & whistles.