Dear FCC: I got a copy of this book from my library. 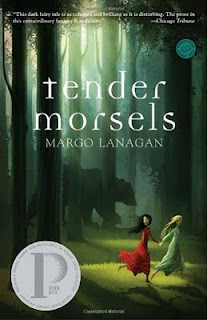 Margo Lanagan has written several volumes of short stories, including Red Spikes (reviewed here); Tender Morsels, however, is a novel—an imaginative, dark retelling of the Grimm fairy tale Snow White and Rose Red. That was one of my favorites as a child. I had (I think) a Little Golden Book version, which I read and re-read. I loved that the two sisters were so different but both got their own Prince Charming in the end, and I loved the bear who was really a prince, even as they mildly tormented him with their childish antics. And I always thought that gratuitously mean dwarf was a bit odd. Well, nearly all of these elements are present in Lanagan's retelling, but she also makes the story her own, which, to me, is critical to a good retelling.

Reader Gut Reaction: Like I said, this is one of my favorite fairy tales, perhaps because of its sheer oddness. It isn't one of the classic Disney-fied ones—it's odd, and a bit wild, and Lanagan preserves this feeling throughout Tender Morsels. Actually, her version of the story has a rather traumatic beginning, with a young woman named Liga and her baby fleeing terrible trauma and somehow finding themselves transported to a parallel version of the world—one in which nobody is mean or harmful, and in which she can raise her baby in peace, as well as the new baby on the way. It was not easy to read the opening chapters, actually, but it was important to establish the harsh, painful realities of the real world in order to believe that Liga could somehow find the fresh start she needed and so desperately wanted.

I really loved the aspect of the story having to do with the Bear Festival in the town, and the young men who are selected to dress in bear costume and chase the girls around—it was an ingenious approach to the idea of how a man would come to be a bear. And the fact that it's based on a real traditional festival is even better. But my enjoyment of this book ended up being curtailed somewhat by the ending, which seemed unaccountably abrupt and left hanging what I thought was a major plot thread. After enjoying the rest of the book so much, and its gorgeous writing, I ultimately found myself a bit frustrated.

Concerning Character: This book is chock-full of varied and interesting characters from beginning to end. I was very satisfied with how the author developed fairy-tale characters into very real, individual, sympathetic people (and, in some cases, very UNsympathetic people). The motivations underlying Liga's behavior and sometimes-questionable decisions were particularly well established, and her two daughters, Branza (Snow White) and Urdda (Rose Red) were distinct in personality but both quite relatable. And I liked that the not-so-wicked witch Annie earned redemption in the end, despite her disastrous meddling. Although the story began in such a way as to make me wonder whether there were ANY nice people in this story-world besides Liga, I was glad of the fact that we were granted the relief of a few truly good souls as well.

Recommended for Fans Of...: Other dark fairy tale retellings, such as Juliet Marillier's Wildwood Dancing (reviewed here), any of Robin McKinley's retellings, like Beauty, or the Ellen Datlow/Terri Windling-edited series of fairy-tale short stories.

Themes & Things: As with many fairy tales, a strong thread in this book is the strength of love—its transformative power and its ability to save us. There is also a lot here about building (and rebuilding) a life, about the family members you choose and don't choose, and about dealing with the things in life you can't control, devastating as they may sometimes be. Liga, Branza, and Urdda all have their own unique journeys toward coming into their own strength and self-awareness as adult women. In the subplot with the dwarf Collaby Dought, though he is not truly evil, we see the obligatory cautionary dangers of greed and selfishness. And, in the end, the witch Annie is a powerful vehicle for the theme of redemption.

Authorial Asides: Margo Lanagan is another fabulous Aussie author. You can read all about the story behind this story in her interview with Little Willow over at Bildungsroman.

You can find this book at an independent bookstore near you!
Posted by Sarah Stevenson at 8:00 AM
Labels: AF, Fantasy/Sci-Fi, Reviews, Sisters

I loved this book, though I had no knowledge of Snow White and Rose Red before reading it and not much now. I heard the author speak when she came to Connecticut in 2009 right after Tender Morsels was named a Printz Honor Book. During the Q&A, she said that Tender Morsels was published as an adult book in Australia.

For a number of reasons (relating to theme and character, not the opening chapters) I think that might have been a better way to go in this country, too. I know in our local library, only two people took it out. I was one of them, and an adult friend of mine who couldn't get past the early chapters was the others. At least one nonlocal librarian has told me it was a hard sell with her YAs, too. I wonder if it's finding a very wide readership in the YA audience and might do better if marketed to adults like you and me.

Gail, I agree this would make a good crossover title for sure--and maybe you're right that it might even do better marketed to adults. These days, with the burgeoning YA market, it seems like publishers are rather quick to slap a YA label on any book with teen characters, whether it has teen appeal or not. Not that that's what happened here, necessarily. It's kind of shocking, though, to hear it was such a hard sell. Do the other Margo Lanagan books do well with the teen library audience, I wonder?