I admit I approached this book with some hesitation. While it's definitely on-topic for our blog - ethnicity and YA lit is a topic we love to delve into - the Wonderland treehouse is a non-denominational, bipartisan (mostly), humanist-safe space. I especially have some strong feelings about mixing books for kids with "messages" about politics and religion.

Despite both of us having our own spiritual ties, we generally stick pretty middle-of-the-road in terms of the books we cover. Looking back through our reviews, I don't think either of us had ever reviewed a "religious" book up 'til now -- and the publisher for this novel is Zondervan, the people who brought you the NIV Bible in those handy hard covers for whacking other kids at church. (Not that I ever did that.)

Despite the various slant(s) I feared this could have, I felt that the topic was important enough to give it a whirl. I'm glad I did, because I can say that I will definitely look at Zondervan again as just a publisher of kids' books, and not worry about dogmatically exclusive or slanted religious content. Though Black, White, Other: The Search for Nina Armstrong had spiritual touches, it had no particular slant, and contains content accessible and appropriate for anybody. Hurrah.

Reader Gut Reaction: This is clearly a traditional issue novel or "problem novel" as we called them in grad school, and there are multiple topic threads woven through the narrative. A family divides - literally. Mom has taken one sib, Dad the other, and they've split to different sides of a Bay Area city. The father is African American, and takes with him the younger, darker Jimi, and the mother is Jewish-Irish, and is left with the lighter skinned daughter, Nina. Whoa. Secondary issues include social unrest in poorer neighborhoods in the wake of a disaster, the father taking up with an African American girlfriend, the younger sibling suddenly acting out and stealing, fissures in Nina's long time friendships, and overriding it all, a sense of fear which underscores prejudices, misunderstandings, and allows too much to go unsaid.

Additionally, there is a novel within the novel, being written by Nina's father about their ancestor, Sarah, with research help from his new girlfriend. Sarah's narrative is a slave narrative which I found to be the less weighty portion of the novel. While Nina becomes more and more invested in Sarah's survival, as if she's never read a slave narrative before, I found myself increasingly bewildered as to what drew her to the story, and why it seemed to speak to her, especially in light of the fact that it is something her father and his new girlfriend have put together, and she can barely bring herself to speak to either one of them with any civility (for good reason, much of the time).

Concerning Character: Nina is a fifteen year old biracial girl who has seemed blithely unconcerned about her combined cultures for most of her life. Her grandma was a union supporter, and Nina's mom still sings the old sixties songs which shaped her childhood. Nina's father is an accountant whose parents were into Black Power in the sixties, who has reinvented himself as a part-time writer researching his family history in the light of African American history. We are not given a time-period for their divorce, but the father has already moved on, and is seeing an African American Studies professor at Cal.

Nina stays on Dad's side of town every other weekend, where, as she walks from the bus stop, she is eyed by guys hanging out around cars, which makes her feel unsafe. (This also depicts the unconscious prejudices/atavistic fears many experience seeing minority males socializing in public spaces.)

Nina's three best friends are Caucasian, one is of Italian ancestry, and while she's noticed differences, the main thing has been their similarity. One of their number departing for a new town creates a space for another girl to join them, and between her influence, and the political talk on the news and around the city Nina's closest friendship with Jessica implodes, then doesn't recover. Nina is unable to communicate her distress at the "them" vs. "us" world in which she finds herself, is unable to find someone to listen, and seems to connect solely with a fictionalized character her father is writing, her ancestress, Sarah.

I wanted to like this family and this novel so much more, but I found some things, especially the blatant segregation of the family, jaw-dropping. While I'm sure that it happens, there is insufficient discussion of its emotional impact in the novel. Nina's father's rejection of her Caucasian half must have made her feel incredibly insecure and terrified that parental love can turn off/on like a faucet based on perceived ethnic makeup, not to mention how unsettling it must have been for the younger brother to realize that perhaps he was valued more greatly on the basis of his "greater African Americaness," despite the genetic incorrectness of that assumption.

The adult characters overall inability to communicate by turns confused and frustrated me; the reader is asked to believe that Nina's father is drafting a coherent slave narrative when he cannot really even speak to his daughter, nor understand her angry distaste for his smoke-ring blowing new girlfriend, (Nina says they know no one else who smokes, clearly placing Miss Helane on the side of evil), who disingenuously calls Nina, "little sister," and shows up inappropriately to Nina's home, uninvited. (And I won't even get into how a woman who is a professor whose studies are dedicated to African American history can fail to sense the sensitivity required to enter into a biracial family.) Nina's mother seems mired in a past that wasn't even her own, is vague and distracted when attempting to speak on the issue of race to her daughter. She seems mostly concerned that no one see her as "the man." The adult's issues loom larger and louder than Nina's struggles much of the time. 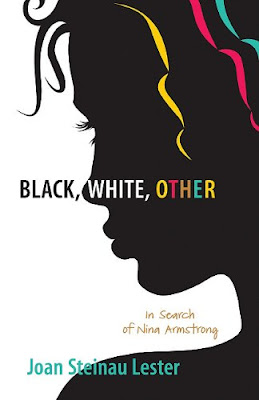 Recommended for Fans Of...: historical novels which have a story-within-a-story framework, and those that move back and forth between present times and history, such as Jane Yolen's Number the Stars, Richard Peck's The River Between Us, or even Mare's War, though neither of these is an exact match.

Also for fans of books depicting the daily life and challenges of biracial characters such as Sarah J. Stevenson's The Latte Rebellion, Marie Lamda's What I Meant, Justina Chen Headley's Nothing But The Truth (and a few white lies), and Jamie Adoff's Jimi and Me.

Themes & Things: As I mentioned before, this novel encompasses a great many things - so many that it's hard to articulate just exactly what this book is about. Divorce, and what absolute crap it puts kids through, the herd mentality racial segregations of high school and what pressure it puts on biracial kids during lunch periods, yes. But surrounding and at times overwhelming the young adult issues are sociological and political themes such as the issue of poorer areas of urban cities having fewer services and greater numbers of minorities - which for some is a chicken/egg question; the newly emergent, militantly political identities of Nina's father, as well as her mother's old-school flower-child, genially clueless and unhelpful liberal sixties union political identity; the idea of African American reparations, which is deeply polarizing and highly political, and a welcoming - yet discriminating - African American community, which seems to want to claim Nina's African American side, even as they disparage Caucasians, and by proxy, Nina's additional identity.

Because of the dating on some of the political themes, I found it difficult to place this novel in time. Union busting was big in the mid-fifties, with Pete Seeger and others putting out collections of songs which supported the union effort. It struck me as odd that Nina's mother sang these songs. They were a hand-me-down from Nina's grandmother, but it still struck me as odd that the text inferred that Nina's mother was a hippie (a 70's thing), but Nina was only fifteen - either her mother was the age of MY mother, or ...something. Additionally, Nina's father talks about getting a lot of "black power" stuff when he was a kid - a 1960's, civil rights movement phrase, which would again make him the age of my father now. So, the explosion which caused the civil unrest in the novel was ... in the 90's? This is unclear.

Though Joan Steinau Lester portrayal of Nina's life and issues garnered her a starred review from Publishers' Weekly, for me the confusion of details and additional political issues muddied the waters, creating talking points instead of narrative, and changing the tenor of this YA novel from something I would voluntarily pick up and read to something I'd expect to be assigned.

Authorial Asides: The author is well-known in multicultural education circles, having, according to her website, pioneered the movement in education in the 80's and 90's. This definitely informs her writing. You can read more of her accolades and experience here.

Producing a thought-provoking brain-full of political, social, and multicultural themes, the debut novel BLACK, WHITE, OTHER: IN SEARCH OF NINA ARMSTRONG hits independent bookstore September 1, 2011.
Posted by tanita✿davis at 3:46 AM
Labels: Ethnicity and YA Literature, Problem Novels, Realistic Fiction, Reviews

Does sound like the author is trying to cover many issues. And thanks for the heads up with regards to Zondervan. I have several of those hardcovered NIVs!

Yep, yay for those NIV's!

I wanted to like this novel more - really did, but was ultimately disappointed and bewildered as to how so much was covered but so little resolved.

Interesting. It sounds like it may have tried to do too much, but definitely some great thematic material to work with. As I read your analysis, I couldn't help thinking about Danzy Senna's memoir Where Did You Sleep Last Night?, which I read recently--white activist mother, African American father, divorced (or separated; I can't quite remember), looking into her own family history. Amazing book.