Dear FCC: I checked this book out at the library. 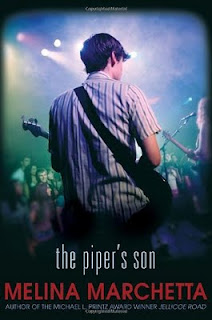 In The Piper's Son, Melina Marchetta returns to the same set of characters from Saving Francesca (reviewed here), five years later. After some serious family trauma, Tom Mackee is in bad shape. He's blown off his former friends, given up his music, alienated the girl he cares about most, and has gone to live with his single aunt Georgie, who's facing her own grief, her own problems, and a pregnancy. Yet somehow, these two very broken souls end up being one another's salvation.

Reader Gut Reaction: I couldn't snatch this one off the library shelf fast enough, after thoroughly adoring Marchetta's earlier novels Finnikin of the Rock (reviewed here) and Jellicoe Road (reviewed here). This one, however, couldn't be more different from either of those two. In fact, what floored me the most about it was the fact that her writing is so versatile, but so strong in a variety of types of stories. The Piper's Son was no exception. Although I had some reservations about how some aspects of the book were resolved (in some ways, it felt like Tom's friends forgave him a bit quickly), this was a satisfying read, particularly with respect to the family subplots.

Concerning Character: I thought it was a really gutsy maneuver for YA fiction to have one of the narrators be a woman in her early forties—Tom's aunt Georgie. On top of that, Tom is an older young adult, in his early twenties. I applaud that, actually, since there ought to be more YA fiction with slightly older protagonists and stories about college and working life. Anyway, on to the characters themselves. The story begins from Tom's point of view, and at first, he did not come across as a sympathetic or likeable individual. Slowly, though, the author builds a picture of a young man who is torn apart by grief and anger, hardly himself anymore. But there's still enough of the old Tom left to actually make a good decision about his future, even if it's mostly by luck—his roommates have kicked him out of their apartment, so he goes to his aunt Georgie's house.

One major factor in making Tom more sympathetic is his relationship with his aunt—it's close, and it's real, and even though their family has been torn apart by his uncle's death in a London subway bombing, Georgie is bighearted and loves her nephew. She takes him in, and we get to know her, too—her pregnancy; her troubled relationship with the father of her baby, Sam; and her own struggles with grief.

Recommended for Fans Of...: This story is a truly complex one. Besides the overarching theme of the family members dealing with grief and reconstructing their lives as best they can, this is also a story about the real meaning of family and of friendship, of love, and of forgiveness—not just forgiveness of others, but forgiveness of oneself.

Themes & Things: Melina Marchetta's other novels, particularly Saving Francesca. Stories about families moving past trauma and rebuilding their lives, like Blythe Woolston's The Freak Observer (reviewed here) and Nothing but Ghosts by Beth Kephart (reviewed here).

You can find The Piper's Son at an independent bookstore near you!
Posted by Sarah Stevenson at 8:00 AM
Labels: AF, Crossover, Guy Appeal, Realistic Fiction, Reviews

I'm so glad you reviewed this! I loved Piper's Son. I totally agree that Marchetta is extremely versatile. She made a character I didn't much like in Saving Francesca extremely sympathetic. She deserves the awards she wins.

I agree. She takes a lot of risks with her writing, too, and I admire that.

Marchetta can put so much heart into one line. Piper's Son is very different from her other novels.

Authors should be allowed to take risk

Who boxes an author in more, their publishers or their readers?

Doret, I love that question. I think I also box myself in as a writer, worrying that nobody will want to read X, or that Y won't be marketable...

I've been meaning to read this for awhile (I love Melina Marchetta) and reading your review has made me put it on hold at my local library. Going to pick it up tomorrow :)

Oooh. Maybe our library here has this one now. I really enjoy Marchetta's books - she's so subtle.

She is! She doesn't, at all, "write down" to her readers or underestimate their intelligence. This one would actually be a great crossover adult book, too, I think.