Dear FCC: I got an audiobook copy of Extraordinary from my library. 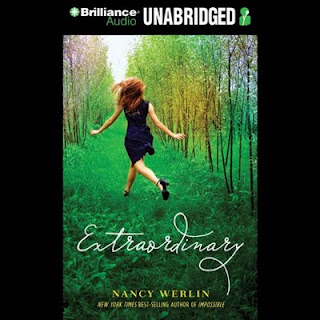 Reader Gut Reaction: My gut reaction to Nancy Werlin's Extraordinary--another tale of Faerie, like Impossible—is based heavily on the fact that I listened to the audiobook version. I have to be honest: I wasn't entirely sold on the voice acting. Something about the timbre of the primary narrator's voice just didn't feel right to me. Having said that, this was an intriguing story about a young woman whose destiny is inextricably intertwined with the fate of all of Faerie—but not in the way you'd expect. Not because she is a long-lost queen or a changeling...in fact, it's got very little to do with her at all...after all, she's ordinary, right?

I enjoyed how the author played with the storied history of the Rothschild family to create an intriguing legend of Faerie, but I also enjoyed the way her narrator, Phoebe, questioned that very story, viewing it through the lens of a contemporary teenager with strong opinions about anything that smacks of antiquated attitudes.

Concerning Character: The main character, Phoebe Rothschild, is the scion of a famous family (yep, THOSE Rothschilds), but you might not guess it just from meeting her. Still, her best friend Mallory doesn't care that she's relatively ordinary. Mallory, who is striking and beautiful and mysterious, used to be the weird new kid until Phoebe decided to ignore her shallow junior-high clique of friends and follow her strange compulsion to befriend Mallory. But now, their friendship is complicated by the sudden appearance of Mallory's older brother, Ryland...an older brother she had somehow never bothered to mention.

When Phoebe gives in to her attraction for Ryland, she not only risks her friendship with Mallory, but she discovers something shocking, sinister, and supernatural about the two siblings. Over time, however, she learns to tap into her own inner strengths, and realizes that she doesn't have to be overshadowed by her glamorous friend, her accomplished mother, or her famous family name—being herself is plenty. Although most of the story is told from Phoebe's viewpoint, we are given just enough clues about Mallory and Ryland's true motives through brief segments between chapters that the sense of danger is palpably heightened.

Themes & Things: This story asks a number of interesting questions: What is the true measure of a person's worth? What makes a person extraordinary rather than ordinary? It also depicts the strength of loving family bonds, and the fact that the bonds of true friendship can be just as strong—and that these bonds can help us transcend even seemingly impossible difficulties and rise up to our full potential. Lastly, it makes the important point that we are NOT our families—that our family tree is not the sum total of our worth in life, yet family can be an important tether to ground ourselves when we aren't sure who we are or where we're going.

Authorial Asides: Nancy Werlin, to me, is amazingly versatile. She seems just as adept at writing tales of the supernatural as she is at writing the mysteries and suspense that characterized her earlier novels. Bravo! Envious here. You can visit her website here.

You can find Extraordinary at an independent bookstore near you!
Posted by Sarah Stevenson at 8:00 AM
Labels: AF, Fantasy/Sci-Fi, Reviews

Ooooo, I am intrigued! I'm on a faerie kick lately (probably because I've been working on my own faerie novel for longer than I care to admit). I'll have to pick this one up and add it to my stack of to-read books that is taking over my closet.

Oh, good! If you haven't read Impossible yet, I'd recommend that one, too. I thought I'd reviewed it, but I couldn't find the review...anyway, I really liked that one.

Mainly the cover of this novel fascinates me for the SHOES. Very cute. But also ridiculous for running about in the forest.

Werlin truly is versatile; just remembering the first novel of hers I read for grad school - incidentally, it was her first novel, and I wrote a paper on it - and this is 180° away topic-wise! I do believe that she can write anything...

The audiobook cover is different from the paperback or hardback versions. I think I like it a bit better. And there is some mention of impractical shoes in the story, so that works. :)