Honestly, it was so much fun throwing out my preconceived novel notions last time, I thought I'd do it again.

Apparently, I am a wuss.

Just the cover of this novel and the title made me cringe and want to pull the covers up. Something Bad was potentially going to happen, and I was wincing even before the first page. Tension? Check. Mystery? Check. Love? Yeah. Check.

Reader Gut Reaction: I was happy to discover that this novel is a definite crossover. The main characters are slightly past high school, and living and interacting with and without adult supervision in adventurous and independent ways. There are the usual life situations in the novel -- annoying parents, nosy neighbors, and new friends -- and these things make it a great novel for anyone. Older teens who enjoy mysteries may really like this.

Also: people who collect weird words will love this. The word snye -- a word local to Ontario, Canada -- means a backwater spot where a river channels off, then and then later rejoins the larger flow.

Leave it to the Ontarians to have their own word for channel.

Concerning Character: Mimi Shapiro is, on the surface, an amusingly ditzy character who coordinates her outfits with her beloved Ms. Cooper - the name she's given her Mini - videotapes everything around her, and has a flair for the dramatic. In truth, she's also someone who is hurting, unsure of herself, and who has made some rather bad mistakes in a relationship with a college professor her freshman year. Unable to deal with the mess she's made, and the fact that the man now won't stop calling, she's on the run -- and drives up from New York to Canada to stay in her famous artist father's dilapidated cottage in the middle of nowhere. 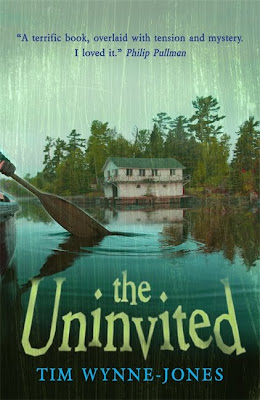 Problem is, there's kind of someone else there... a fairly cute guy named Jay. He's a musician - but kind of angsty, wound up and tense. He accuses her of pranking him and leaving him some pretty weird and twisted gifts around the house almost as soon as she arrives. Obviously, she hasn't been, as she didn't even know he was there, or who he was, but the messages he tells her about are disturbing... and maybe so is he...

What should have been a simple misunderstanding is partially cleared up, and as things are explained, Mimi and Jay come to a shaky truce. It lasts until Mimi finds out she's been sent a twisted message of her own...

The Uninvited has a cast of creepy characters who could either be just small-town rugged individualists or threatening. There's a sleepy charm to this backwater woods, but the wisest folk will keep their eyes open. Something strange is going on in McAdam's Snye.

Recommended for Fans Of...: mysteries with a strange, lurking, fish-out-of-water character, or "new girl in town" trope. Just think Lois Duncan, Sonya Harnett, Joan Lowery Nixon, Nancy Werlin, and Eve Bunting - those kind of disturbing books which start out normally enough, and then...

Authorial Asides: In case you wondered, Tim Wynne Jones is not related to the late Lady Diana. At all. Which is sad, because you can't help hoping that her magic goes on in as many children as possible. (I suspect she would have found that sentiment both somewhat horrifying and amusing.)

Liz reviewed this novel back in February at the SLJ Tea Cozy, and the American version of the cover shows up at her review. For once, they're rather similar. You can find your own copy of THE UNINVITED with either cover at your local library where I found mine (thank you, FCC) or at an independent bookstore near you!
Posted by tanita✿davis at 8:59 AM
Labels: Crossover, Mystery, Reviews, Sibling Fiction

Sound SO CREEPY, but the right kind of creepy for me. :) I ate up Joan Lowery Nixon and Lois Duncan when I was younger.

OH. So, speaking of Joan Lowery Nixon, I was surprised to discover that there is a much newer book with an identical title to one of hers--THE OTHER SIDE OF DARK. No relation, of course. I know you can't copyright book titles, but I was still kind of amazed.

I think you'd both enjoy it -- I love family stories, and I tend to write them, so this is all tangled up in mystery PLUS relatives -- it's a definite win. But, creeeeepy, yeah.

Just put it on reserve. I need a lot more horror/creepy/mystery books!

I'm surprised by how creepy it was - but it turns out so well in the end. Some good twists.