Aside from a brief flirtation with zombies in ROT & RUIN by Jonathan Maberry for last year's Cybil Awards, I avoid zombie books. I'm not a fan of the genre, so when I started reading ASHES, by Ilsa Bick, I was ...surprised, to say the least.

The whole zombie thing has never to me made sense. How come the zombies never eat each other? And yeah, we're omnivores and designed to be that way, but how does a person spontaneously develop a craving for brains, and how does one's digestive system suddenly deal with eating people raw? I mean, seriously. Zombie outbreaks happen, and you never see people rolling around in agony and dying of bowel flux and dehydration. Sorry. But I have trouble suspending disbelief about some things.

So, when I picked up Ilsa Bick's book from NetGalley (which is where I received it from her publishers at Egmont USA in .pdf form, FCC, thank you), I was surprised by how much I liked it, to say the least. Last year, Ilsa Bick's Cybil-nominated DRAW THE DARK was a strong contender, it was spooky and well written and desperately disturbing, so it shouldn't have been a surprise that ASHES also followed suit. A dystopia that opens with an elecromagnetic pulse zapping out all power - watches, cell phones, iPods, pacemakers -- well, that's got that touch of realism that Bick's novels so far have used. ASHES, I knew, would be fast paced, exciting, and spooky-real.

Boy, is it ever. Even with the army of the Changed... 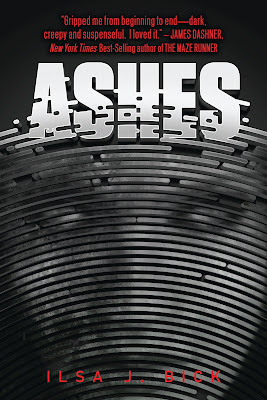 Reader Gut Reaction: The military details are hideously, incredibly real -- possibly reflecting the author's past employment as an Air Force major who really knows a.) what weapons are out there and b.) what damage an electromagnetic pulse could really wreak. It is disturbing, as birds fall from the sky and animals break and run. Everything goes haywire. Watches stop, planes fall, car engines fail. No computers, cash registers, automatic doors, elevators...

Because former Major Bick is also Dr. Bick, child psychologist, her additional insights into the complexities of the young human mind fine tune and ratchet up the novel's freak factor. There's no shortage of reactions and emotions in this novel - people are full of fears and bravado and behave with craven cowardice, heroism, and sheer cussedness. Bad Things Happen -- and over and over the characters are saved. People begin to believe in Fate. However, at times, the reader often doesn't know what to root for, what to wish or hope for.

Which merely heightens the suspense.

A lot of the questions that could have come up in this novel were unexplored by virtue of it being set in the Northeast/Midwest and peopled solely by Caucasian Anglo-Saxon folk, which is often a failing of dystopias (apparently only Caucasians will survive the end of the world). Because there's no discussion of putting aside ancient rivalries or old racial tensions to work for the preservation of humanity - those sorts of discussion, which would have added further richness and texture to the plot, are missing from ASHES. It may be that the author figured with the multiple "changed," "awakened" and "chosen" people designations, adding in ethnic and gender categories might have created simply too many groups. Maybe it was oversight. As this is the first novel in Bick's trilogy, she may have some thoughts on the matter later - or not.

Concerning Character: Alex is a girl with a lot on her mind. Cutting school to get out and try and straighten her head out, carrying the ashes of her parents with her, is either the best thing she's ever done, or the most dangerous. She's independent, tough-minded, and fed up with her life, and against her aunt's wishes, she leaves to rough it in the countryside for ten or twelve days.

When the "zap," as she calls it later, happens, she's just met up with a kind-but-nosy old man, his grumpy eight year old granddaughter, Ellie, and their dog.

And then the world falls apart.

Alex is left with flashbacks of terrifying human atrocities that she can't handle, responsibilities she doesn't need, abilities she never knew she had, and a renewed fears that a ticking time bomb inside her body could change everything - for the much, much worse.

Meeting Tom, a young soldier survivor of the catastrophe, means that now she has someone on hand that she can maybe trust -- maybe. He's hero material and handy, good with Ellie, and very easy on the eyes, but there's a darkness in him -- he has secrets of his own. What is he running from, other than those whose brains have been zapped. Why was he in the woods so far away from his posting in Afghanistan? Was he really deserting?

Midway through the novel, the dramatis personae changes, and Alex is exposed to a whole new group of people - with their own rules, beliefs, and quirks. Characters in this novel aren't always who they appear to be at first - and Alex learns that while sometimes, people can be trusted to show their true colors, likely, they don't...

Recommended for Fans Of...: EPITAPH ROAD, any of the Susan Beth Pfeffer trilogy, Meg Rosoff's HOW I LIVE NOW, Brian Yansky's ALIEN INVASIONS, AND OTHER INCONVENIENCES, though without Yansky's light touches of humor. If you like your dystophia fast and filled with menace, this one's for you.

Themes & Things: In a dystophia, of course the theme is survival. Alex, Ellie and Tom reconfigure the meaning of the word family to make it the three of them, and Alex struggles with ideas of loyalty, compassion, and determination.

As always, dystophia also has an understated discussion about technology -- those in charge always control it, and all resources, and the rest of everyone else has to scramble and scrounge. This opens up a discussion of a caste system, which in this novel is something much darker. How do people determine who is worthy of being the one to hold technology, have food and shelter, or carry forth the brave new world? With God's help...?

What happens if you're not quite sure about the God thing -- or the motives and actions of the people left in charge?

ASHES hits bookstores the first week in September. Find it at an indie near you.
Posted by tanita✿davis at 2:01 PM
Labels: Fantasy/Sci-Fi, Realistic Fiction, Reviews

I maybe have to read this, although as a rule, I haven't enjoyed zombie books as much as zombie movies. I've liked some of them, though.

You may be interested to know that Robert Kirkman's Walking Dead graphic novel series (about zombies) does get into some of the race issues you mention, mostly exploring how characters' prejudices and unwillingness to work together thwarts their efforts to survive, which is one of the main themes of the series--human beings being their own worst enemies and all. I haven't read the whole series, so I'm not sure how it all plays out beyond the first four or five books, though. It is really bleak and a picture of humanity that got repetitive and depressing, so I stopped reading it. Like I say, not such a fan of the zombies in print.

I also am generally not a zombie fan, for many of the same reasons, although I did enjoy Rot & Ruin, and I really liked Cherie Priest's Boneshaker (her zombies were reasonably well-explained and also not a major part of the plot anyway). This one sounds interesting, though, if frightening! Actually, I had been wanting to read Draw the Dark and then when I saw it in the library and read the blurb, I thought it might be too scary for me...

Adrienne, Walking Dead sounds really fabulous - except for that part where it got bleak and repetitive... I actually objected to The Forest of Hands and Teeth on that basis, but I know I'm alone in that.

I just want to read novels wherein people are real, and discuss reality - even in zombieville, I think reality exists, and that reality is that we WOULD have to work together to live. Period.

A.F., the cover of Draw the Dark scared me into reading it almost last!!!!

OK, I've finally read this one! And wow, I really did enjoy it. And, hey, the author and I have the same agent. :)