The Courage to Change 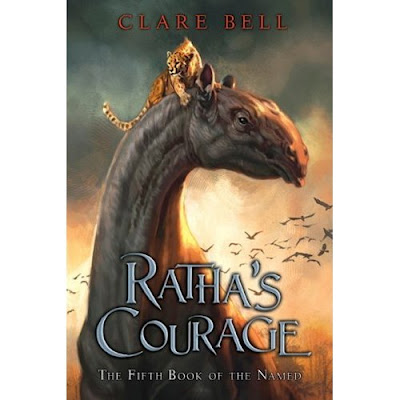 This book is a 2008 Cybils Nominee for Science Fiction and Fantasy.
An unexpectedly poignant adventure in the lives of the Named, Ratha's Courage introduces new names, new faces, and new ways into the clan of sentient prehistoric cats.

Much of the novel is familliar -- Ratha is still the clan leader, and Thakur still teaches the young ones to herd -- including the females, since Ratha has something to say about it! Fessran still maintains the Red Tongue with the rest of the Firekeepers. The Named now embrace treelings, which are the ring-tailed, yellow-eyed animals which help them make fires and are generally a comfort to have around, and now two of the youngest clan members have tamed... rumblers. Monstrously tall ruminants who look down on even the largest of the Named from what seems like miles above them, the rumblers are a nuisance to the whole clan, even worse than the tuskers, who at least make good eating. The rumblers smash dwellings and uproot trees and are always, always eating and always following their two little friends whom they've taken a shine to. Ratha warns the cubs to keep the giant beasts away from the camp!

As always, each new episode of the Named brings some new challenges. Ratha's daughter, whom she abandoned, fearing she was not sentient, has been integrated with the Named, and with her, her mate, who still is torn between her and the voiceless Un-Named clan that took her in. Once Ratha and The Named feared everything which was different, but the treelings and the tuskers and the voiceless song of Quiet Hunter and his kin have shown them that intelligence remains in various forms. Could it be time to bridge the gap between the two cultures -- and share fire? Ratha thinks maybe it is, and the clan wrangles the question around and around. Cautiously, the Firekeepers create warm spaces for the other clan's old, very young, and their mothers -- but even as it is evident that Quiet Hunter and the rest are benefiting from the heat in the cold nights, there's a misunderstanding -- an accident -- and a tragedy. And out of that tragedy comes a war.

This is an emotionally tough novel, as the complications of conflict are shown from both sides. The implacable reasons behind why a war should have started are quite clear -- the biological imperative of territory and young are plain. Though the reasons are clear, the reader is left to decide if any of the actions are justified -- the war is not fair, it drives the Named to horrible lengths, and almost extinguishes them all.

The desire for revenge drives Ratha nearly mad. Is it that forgiveness can be a kind of courage? And is Ratha courageous enough?

Buy Ratha's Courage from an independent bookstore near you!
Posted by tanita✿davis at 2:46 AM
Labels: Cybils, Fantasy/Sci-Fi, Reviews

Yes, you picked up on the essential idea of the book, that forgiveness is a kind of courage. Good review, and thanks again.

Thank you for taking the time to write such a wonderful and insightful review.

I am in the middle of reading this book right now and enjoying it. I read the first two in the series but missed the third so I am still piecing Thistle's story together. I find this one more challenging reading than the others and am reading it slowly trying to soak it all in. As I said in a Tweet, these cats have more social complexity than I can manage myself! LOL I appreciate your review.