Once in a Blue Moon: Every Soul a Star by Wendy Mass 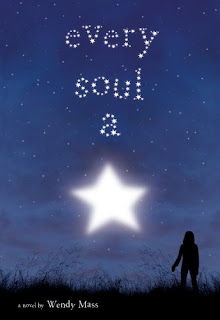 This book is a 2008 Cybils nominee for Middle Grade Novels.

When your name is Alpha because the Alpha is the brightest star in any constellation, it's a pretty sure bet that your parents are astronomy enthusiasts. That's true of thirteen-year-old Ally, who lives with her parents and younger brother at the Moon Shadow Campground. For most of Ally's life, they've been planning for the big event that's taking place that summer—a full solar eclipse, and the campground is directly in its path. In a matter of a few weeks, the campground they own will be inundated with eclipse chasers.

Two of those eclipse chasers are parents to Bree, who treasures her good looks and popularity and dreams of becoming a model. Bree's a quintessential city girl, so when her parents announce that they'll be spending part of the summer in a remote campsite with only other astronomy nerds for company, she's less than enthused. Try devastated.

Meanwhile, another city kid named Jack finds himself in an awkward situation school-wise. Nobody really wants to make up work in summer school, so when he's offered the chance to accompany his science teacher on an eclipse tour, helping him out with some data collection, he takes it. He just hopes it won't be too boring.

Of course, all three of these narrators—who take turns telling the story, who each have their own individual story to tell—inevitably meet at the Moon Shadow Campground. Their age, though, is just about all they seem to have in common. But, under the dark of the eclipsed sun and the wonder of their shared experience, they just might be able to learn from their differences. This is a sweet, warm novel that handles issues of friendship, family, and self-discovery with a light touch. With its combination of gorgeous, vivid description and fascinating scientific facts, it's also sure to make anybody intrigued at the thought of seeing a full solar eclipse someday--I sure am.

Buy this book from an independent bookstore near you!
Posted by Sarah Stevenson at 3:39 PM
Labels: AF, Cybils, Middle Grade, Realistic Fiction, Reviews

I'm Pizza, I also have a blog on books, please take a look and tell me what you think:

Thanks for this review. I know an astronomy nerd who would love to take a look at this.

I've been intrigued by this book ever since HipWriterMama's interview with the author. Thank you for reminding me to go out there and find it.