Toon Thursday: In Praise of the First Draft 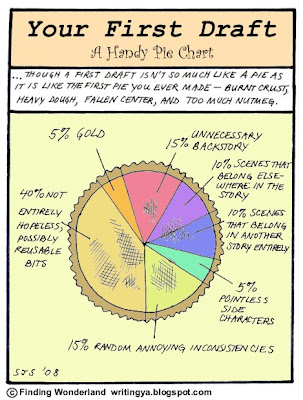 Way back in, oh, November, I was trying National Novel Writing Month. It wasn't my most successful attempt at NaNoWriMo--I had to admit this year that I wasn't going to make it to the end. And then I felt a bit guilty, because I'd been getting all of these wonderful and inspiring pep talks in my e-mail box from various authors. There was a lot of great advice in there, and looking back over it has made me feel...not quite so bad about my poor abandoned (temporarily, at least) first draft. I thought I'd share some of that advice here, as a sort of Toon Thursday supplement. Enjoy!

Alchemists tried for centuries to turn base metals into gold. Every time we sit down and put words on paper, we succeed where they failed. We're conjuring something out of nothing. - Jonathan Stroud

The question authors get asked more than any other is "Where do you get your ideas from?" And we all find a way of answering which we hope isn't arrogant or discouraging. What I usually say is "I don't know where they come from, but I know where they come to: they come to my desk, and if I'm not there, they go away again." That's just another way of emphasising the importance of regular work. - Philip Pullman

[P]age 70 is where the misery strikes. All the initial excitement has drained away; you've begun to see all the hideous problems you've set yourself; you are horribly aware of the minute size of your own talent compared to the colossal proportions of the task you've undertaken. - Philip Pullman

I aim always to get to the end of the first draft even though all the time I’m telling myself that I’m writing nothing but garbage that no one on earth would ever want to read, especially me. But I tell myself that this poor little attempt, this garbage, deserves a chance. - Katherine Paterson

Michelangelo's Pieta was once a shapeless block, most of which ended up as dust on his studio floor. As you write, give yourself permission to create that formless block---the necessary first draft from which a wonderful book can spring. - Nancy Etchemendy

All of the above presumably belongs to either the original authors or to NaNoWriMo, and I hope I'm not violating anything by sharing a few choice tidbits with you. There's also a FABULOUS pep talk from Meg Cabot, but it was so good I couldn't pick just one bit. If you want to read it, let me know and I'll forward it to you.
Posted by Sarah Stevenson at 5:50 PM
Labels: AF, Toon Thursday, Views, Writing Daze

Oh! I NEED a door-sized poster of this.

I think you're scarily accurate in your percentages, too.

This pie chart reminds me of my first two (abandoned) novels. I remember getting so distracted by research, too.

This is seriously awesome, and it made me remember someone's first blueberry pie -- we cut the tough leather crust and the middle pooled out on the table. I won't tell you WHOSE pie that was, but she will laugh when she sees this.

Ha ha... this is terrific. Right on the money!

I love that pie chart! When I was in college I went home for T'day with my best friend. Her little sister made the pumpkin pie. We were all so proud of her until I bit into a whole clove. She said "oh, so that's what they meant by ground cloves. I couldn't find any so I just used the ones we had." Ouch! It was like a little hot pepper rock. I almost broke my tooth! LOL First pies - first drafts...

A., I just put your pie chart up as my laptop wallpaper! It is so, so true. Perfect.