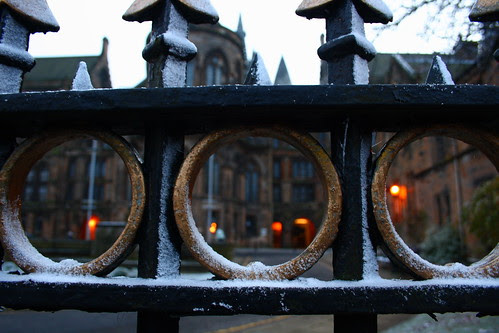 A Happy and frosty cold first of December to you, people! November in Glasgow ended on a self-congratulatory note, as the temperature dropped to its coldest in November since 1985. Yes, round of applause, please. Being from a warm westerly place, I'd never before seen an ice mist. I have seen one now. It is not nice, though the air does rather sparkle!

Ah, another well-meaning person is talking about young adult literature! Hie thee onward to Miss Rumphius' blog, and log in on the great debate: why do you read?

This conversation was sparked by the very well-meaning Caitlin Flanagan and her piece in The Atlantic titled, What Girls Want. As soon as I a.) read the title, and b.) realized that most of the article was a long run-up to a highly positive critique of the Twilight series, I realized we have some deeply fundamental differences on men and women -- but I read it anyway.

The gist of her article is that young women are the best readers out there, because they need fiction to escape into -- to ignore the world whilst they work out Those Big Questions. During their "sulks and silences" they're thinking.

This was a stunning piece -- as in, I'm stunned and, like Miss R., not quite sure how to respond...

Meantime, I'm in search of opinions -- I'm looking for books again -- for babies, which is totally beyond my frame of reference. What's the happening one and a half year old man reading these days?
Posted by tanita✿davis at 12:56 PM
Labels: Random Notes and Errata, Views

Flanagan's article for the Atlantic is long for no reason. It seems like Flanagan was trying to prove something, from what I skimmed. There is no way I was reading that whole thing. Maybe someone who read it all the way through can explain its purpose.

For the baby
Karen Katz is always nice, especially her lift flap board books
Tickle Duck by Long
Dance With Me by Smith

I'm still stunned by the article. I would have excerpted and highlighted more of it if it wouldn't have been a copyright violation. I just didn't get it. She not only demeaned young women with her views, but young men by her slights. Sheesh!

As for books, when William was that age he loved two books without question. You can get them both in board book form, which I highly recommend.
Good Night, Gorilla, by Peggy Rathman
Freight Train, by Donald Crews

I also recommend any of the Jane Yolen, Mark Teague dinosaur books. Our favorite is How Do Dinosaurs Say Goodnight?

Thanks for points a, b and c, Tad! You're so right.

The crazy blanket statements all through this article made me crazy.

Yeah, because, you know...they all want the same thing.

My 18 months old loves the Dinosaur books (Does a Dinosaur say goodnight). I dont know why - but he loves the Hairy McClary series (it is english - my hubby is from Britian). They are about dogs.
Shelli (Market My Words)
http://faeriality.blogspot.com/

Thanks for the Flanagan and Tricia link.

The young gentleman of your acquaintance is likely firmly in stages I and II, with perhaps moments of III, so whatever you choose, it should be board books.

We are very fond of Don Freeman's Corduroy books, some of which come in board book editions for the stage I-II reader. Interest in them lasted right up into stage IV.

Oh, man--I only recently stopped getting The Atlantic so I missed this one, but WOW. I almost don't want to go looking for it. Kinda sounds like a new version of the Men Are From Mars, Women Are From Venus ideology. (Don't get me started on that...I wrote a 25-page term paper about it as an undergrad...)

The idea of making such blanket statements about YA novels is just irresponsible, and reveals how uninformed the average book reviewer is about YA and children's books. Perpetuating that myth does neither YA writers nor YA readers justice.

Anyway, now that I'm off my soap box, I'm going to agree with Anonymous--judging from my experiences with nephews, book-eating is definitely going to occur. :)

And you gotta have Knuffle Bunny!

When I read the article (quickly) I just assumed a lot of it was tongue in check, since otherwise it was so silly...

Until I started the Reading Tub, I hadn't read much YA. About 25 years to be exact. I had anticipated a lot of "escapist" stories, but I was WRONG. Yes, there is a little of that, but I've found some incredible stuff ... that I wish had been available way back when.

Anonymous is right: board books are the way to go. We've enjoyed the CLEO books - bright, colorful, and very tasty.