The Poetry Friday round-up (Whoo hoo! Look at me, participating two weeks in a row!!) is at The Farm School, and has one of my favorite Nash poems, The Firefly. 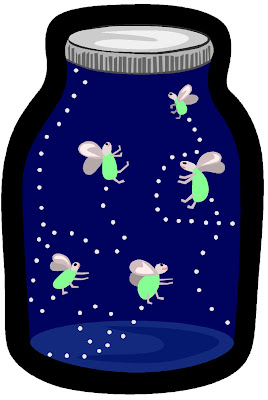 It's funny -- just last night an East Coast transplanted friend emailed from her summer school at Princeton to shriek that she had seen fireflies. (If you're from California, that's a big deal.) I imagine the first people to come to the U.S. must have also thought that fireflies were amazing, a good omen on strange shores. It's a firefly kind of week, with things flickering just on the edge of possibility, like heat mirages, shimmering, just out of sight...

"Are There Not Still Fireflies"

Why then do some still fear
the barbarians are coming
coming coming
in their huddled masses
(What is that sound that fills the ear
drumming drumming?)

- LAWRENCE FERLINGHETTI, delivered November 16, 2005 at the National Book Award on receiving the Literarian Award for outstanding service to the literary community.
Hear the streaming audio or watch the video here.
Posted by tanita✿davis at 9:26 AM
Labels: Poetry Friday, Views

Fantastic selection! My biggest Literary Celebrity Encounter was with Lawrence Ferlinghetti--who Rob and I actually got to have dinner with in about 1999 or so. Rob was finishing up his MFA and working as a Master Printer for an artist, Stephanie Peek. She put together an artist's book with her artwork inspired by passages from Ferlinghetti's Endless Life. At any rate, there was a dinner at her house for those involved in the project, and he was there. And he had some interesting stories to tell, that was for sure! I was definitely starstruck, even though at that point I hadn't yet decided I was going to be a writer.

Oooo... what a beautiful poem. One of my favorite discoveries this summer was that there are just as many fireflies in my backyard in Virginia as their were on the backroads of an Iowa summer...

One of my most vivid memories - still clear in my mind after more than 35 years - is of a scene my (then future) husband and I observed during a summer night in Maine: a sky full of stars above a field full of fireflies, points of light reflected and magnified.

I second the "fantastic selection!" comment and want to come back and re-read this some more. Thanks!

I grew up in East Tennessee, where there are fireflies by the thousands. We captured clouds of them while waiting for the fireworks to start on the Fourth of July.

Thanks for coming to see me today. Poetry Friday is fantastic!

When my son was a toddler, he used to pull up a chair to the door, which had a clear window, so that he could watch the fireflies outside at night. It was the sweetest thing in the world.

This really needs to be made into a song.

I love the illustration, too, TadMack. Where is it from? Wouldn't a t-shirt with that image on it be great?

The illustration is a plain old Publisher clip art image from my computer, so I'm betting it could safely be made into a t-shirt, since it's probably a "fair use" image.

I envy you all your connection with fireflies - I equate them with a lyrical kind of magic not much found in the world. And I love this poem so much, because of this intangible beauty of this country; shallow and deluded and bewildered as it may be. Ferlinghetti talked about poetry as prophetic, and this truly seems to have BEEN a prophetic poem in many ways. At the end of the Roman Empire surely there were still fireflies, too...

PS - (And, Alkelda, let us know when you've finished the song.)

If you'd like some additional nature poems, I found two about Luna Moths to complement a photo my daughter took:
Cecily Parks,"Luna Moth"
http://www.blackbird.vcu.edu/v4n1/poetry/parks_c/moth.htm
and Mary Oliver, "Luna"
http://www.flickr.com/photos/drp/37264894/
You can view the photo and other links on Journeys
http://dmcordell.blogspot.com/

I have a vague, disconnected memory involving fireflies. Actually, I have two, one of which was as a two year old child, looking at them in a jar. But the other ....

I was 13, in central Mexico, and had been to a sort of bonfire / party. I can't recall if we were coming or going, but I found that fireflies had been smashed upon the grill of the truck. I picked some out, because they were bright, bright, glowing fiercely, even though they were dead.

The lights of the firefly, you see, continue even more brightly when they die. It has nothing to do with life, merely with chemical "momentum," if you will.

Which is rather the point.

Once the lights go out, it's too late.