This has all the earmarks of a great series: an engaging, realistically flawed main character, stupendously detailed world-building, and tons of new-things-per-page. It's got adventure and heart -- but felt uneven. I wasn't aware this novel would have a sequel, and the novel didn't wrap up enough for me to be able to feel the story was finished. I'm hopeful Strange Chemistry puts out the sequel fairly quickly, which could answer a lot of reader questions and make the whole feel more complete.

Reader Gut Reaction: One thing I really, really liked about the world-building in this book is that it isn't working. On one level, this is a novel about tries and failures. At one time there was a greater organization on Mars, as well as research bodies, business and education and other social strata which has fallen on hard times, due to politics. The loss of an exovet, as described with the first chapter, is the first crack in a disintegrating system, because space ships, powered by massive alien animals, are ...vanishing, often with the full complement of crew. Are they all dead? Are they all alive? No one knows, and further, no one knows why...

The second failure is a failure of politics. The relationship with Earth is finished - and has been for awhile. There is no trade nor safety net beneath. As the Mars colony fails, those who can no longer farm, due to sheer bad luck, due to irreparably damaging the fragile balance between the altered Martian landscape or due to simply not knowing enough to survive have moved to join a filthy, sprawling human slum on the outskirts of the largest town.

And "HUMAN" is the important word in that scenario. The third failure in this novel is the social breakdown. Xenophobia is a huge, huge problem on Mars. Some humans keep to themselves, others prefer to live for their corporations, as if they're on Earth, and ignore the Martian "issue" altogether. Still others refuse to get too close to native Martians, including sentient insectoids like Hamish or those aliens with the living tattoos beneath their skin, or many others, so now that Earth is out of the picture, and has left the Colonists to fend for themselves, they're falling into old racial groupings. Too many humans believe that folk of other species have nothing to offer and that the Terrans who consort with them are tainted. The "pure human" movement is a politically divisive, dangerous and crazy-making point of view. The colonists are divided, and Townies will have nothing to do with kids raised on farms; kids exposed to alien workers or those dangerously odd Martian farm animals.

Not considering this excellent world building set-up, another thing delights about this book and that is that it's a "work" book -- the kind of book that lets the reader know just how much work it is to do something. In this case, it's the work it takes to become an exoveterinarian. Exovets study animals that are "off'wa" -- off world, alien species. In this case, the animals are native to Mars, and they're a varied mix of scorpion-like, whale-esque, and cow-like -- only on a massive, larger-than-a-barn like scale. Some of the animals have advanced intelligence enough to learn to communicate - whether through sign-language or modified speech. Others are simply vicious ...they want to EAT those who study them, they give no quarter, and have no sympathy. How often does one run across that in SFF? No modified treecats, no six-fingered whatsits whose only role is the be the Magical Alien and somehow miraculously and intelligently help the all-important human. These are animals. This is like that one horse book you read to death at twelve. This is the part of the story that is simply awesome.

Concerning Character: Zenn desperately wants two things: one, to be a exoveterinarian. Two, to figure out what's going on with her father. Her mother, presumed dead these many years, was the center of his life. After the accident which might have killed her - nobody knows for sure - he's been distant emotionally, and then physically, taking a job off-planet as a lawyer, and leaving his daughter in the care of his brother. Zenn blames herself for her mother's disappearance - ridiculously - and yet, it's clear that she's not enough to anchor her father to Mars. She is fairly convinced that everyone eventually leaves, so she has a Rule to which she adheres strictly: no one gets past her inner circle. That means she doesn't love anyone wholeheartedly except for animals. That 17-year-old Zenn feels she is able to connect with the ginormous Martian animals on a psychic level is intriguing - and not believed by those around her.

The novel is set primarily at the Ciscan Cloister Exovet Clinic. Ciscan Cloisters were places of both worship and study, but years into the future, this last cloister only pays lip service to its religious roots. Though there is still an abbot and a sexton, there is, sadly, no chanting, and very few other novitiates. As a matter of fact, there are NONE. Only the title character, and her uncle, now that her mother has been missing for years, and her father has gone away.

My problems with this otherwise well-structured novel begin in the last half to the last third of the story, where it becomes apparent that things will NOT be wrapped up in the next twenty or so pages. Emotional inconsistencies abound, and are entangled in the character of Liam, one of the few "available" boys, but a Townie. While Hamish is hilarious, Zenn's interactions with her uncle believable, and even the slightly two dimensional "villain" was working for me, without revealing specific spoilers, Zenn's reactions, after she is in possession of all the facts, are deeply unrealistic. Because has held herself to a standard of behavior - with reasons - for years, and is focused and intent on her studies, I have a hard time squaring those characteristics with her actions - and lack of reaction - to events toward the end of the book. The conclusion seemed hurried and non-specific, and the emotional intensity which it should have had was simply missing. Zenn seems punch-drunk from so many changes and revelations, and just ...limply goes along to the next thing. I, as a reader, don't feel pulled along by the plot's momentum in any way, and I felt angry and disgusted that a thin romantic impetus is used to bundle away what sharp edges Zenn should have, and sort of diffuse what should have been her incisive and intelligent judgment, which has served her well in the rest of the book. Yes, her "Rule" is the result of being hurt, but it's a protection that she seems to shed abruptly and without much thought, especially in the last scenes. The shriek of "WHAT!?" I emitted was pretty loud. 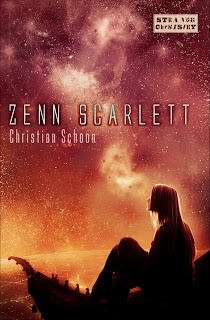 Recommended for Fans Of...: CLAY'S ARK, by Octavia Butler, Kenneth Oppel's Matt Cruise series, including STARCLIMBER; S.L. Viehl's STARDOC novels; Sherri Tepper's GRASS; James White's Sector General novels. None of these are considered YA, but they all crossover pretty well.

Cover Chatter: This novel wins on a lot of levels - technically, the writing is good, the details of exobiology are good, the detail is wonderful. It's details like the planetary atmosphere depicted on the cover which make it special. Mars, in Zenn Scarlett's case, isn't terraformed entirely -- it's too big, and there are too few colonists, and any water put into the land would simply boil off into the atmosphere, so, there's a work-around. In the author's words:

"In Zenn Scarlett, I proposed a mini-terraforming approach where, instead of going to the colossal expense of making the entire surface of Mars livable, my colonists devised a technology that enabled them to put a “roof” over some of Mars’ great canyon systems and live and raise crops on the canyon floor. This was achieved by employing barymetric ionizing generators on the canyon walls and projecting a thin, translucent layer of coherently energized molecules that would trap oxygen and moisture beneath it, allow sunlight to pass through, but keep out the frigid, near-vacuum of the thin Martian atmosphere above." - Christian Schoon at Valia Lind Writes

Whether this could really work or not, it feels believable, and it gives the cover designers the amazing "roof" of Martian atmosphere to work with for the cover, which is striking, and something that looks unique and adventurous enough for readers to give it a second look.


Because SYNCHRONICITY EXISTS, today Christian Schoon is also up at Scalzi's "Whatever" for a Big Idea post. Don't miss.

This ARC courtesy the publishers, my review is unsolicited, and my views are my own.

After May 7, you can find ZENN SCARLETT by Christian Schoon online, or at an independent bookstore near you!

Posted by tanita✿davis at 7:46 AM
Labels: A Cybilism?, Adventure, Fantasy/Sci-Fi, Reviews

This is on my wish list, especially when I discovered that the author wrote for Batman: The Animated Series. Plus, I love the premise.