Thursday Review: HATTIE EVER AFTER by Kirby Larson 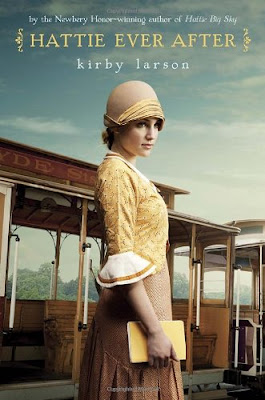 Reader Gut Reaction: Kirby Larson is a familiar face to many of us old-school bloggers, since she's been to many a Kidlitcon and SCBWI conference. Her first book about Hattie Brooks, Hattie Ever After, introduced us to a (dare I use this hackneyed descriptor?) plucky young woman who inherits a rather miserable homestead plot in Montana from her mysterious Uncle Chester. Her hard work trying to prove up on the land, and working to pay back her uncle's debt, gave her a lot of valuable experience, but it also increased her determination to strike out and be a success on her own. She's been writing a lot, and she's caught the bug—she wants to be a reporter.

So, in Hattie Ever After, when Hattie gets a chance to Go West, Young Lady, she seizes it. After all, her friend Perilee is in Seattle, and—even more fortuitous—Hattie's just received a letter for poor dead Uncle Chester from one Ruby Danvers in San Francisco. Okay, so she's disappointing poor stalwart Charlie, back from the war, but how can she give up her dreams? Of course, being a reporter is less glamorous and more complicated an endeavor than Hattie originally envisioned…and then there are a few wrenches thrown into the works with competitive fellow reporters and a rather demanding new friend…but as a reader, I was confident throughout (even as I cringed at Hattie's inevitable missteps) that she would prevail in the end, and wanting to see just how she got there kept me turning the pages.

Concerning Character: Hattie remains as spirited, curious, determined and smart as ever. Of course, it's these very characteristics that land her into a sea of trouble from time to time—and help her pull her way out of it again and back onto firm ground. I'm always intrigued by how contemporary writers portray young women from previous eras, and I enjoyed how Larson depicts Hattie as both a girl OF her time and ahead of her time, modern, looking forward, as it's natural for younger generations to do, without making her too anachronistic. As for the side characters surrounding her, they are all the colorful, interesting sorts you might expect to find in 1919 San Francisco, and, being the kindhearted person she is, Hattie has no trouble winning friends. The problem is, some of them are not necessarily friends of the truest sort…

Themes & Things: Chasing your dreams—it's the hopeful side of the coin that is coming of age (the other side of the coin being, I suppose, learning things the hard way). Of course, Hattie DOES learn things the hard way, but then she uses that knowledge to set herself on the right path again and keep on forging ahead. As it says in the jacket blurb, she's got a resilient spirit, and that means she ultimately prevails where others might give up. That is an important message, in my opinion—learning to identify those goals that are truly important to you, going after them for their own sake and for the sake of your heart's happiness, and not giving up in the face of adversity.

Cover Chatter: That cute outfit! I want it! It's very similar to one described in the book, so that's perfect, and I love her reporter's notebook and determined expression. The cable cars, of course, are fitting…I'm not sure the background landscape really screams "San Francisco" but overall, I really like this cover, and the complementary color scheme of orange against blue really makes it pop.

You can find Hattie Ever After by Kirby Larson online, or at an independent bookstore near you!
Posted by Sarah Stevenson at 5:59 PM
Labels: AF, Historical Fiction, Realistic Fiction, Reviews, Romance

Yeah, this book has my name all over it. I wrote part of my thesis on Hattie Big Sky, so I'm glad to read your review. I want this book.

I'm still afraid to read this book. HBS was PERFECT. PER-FECT. I dunno about embroidering on perfection.

It is a really good sequel! I don't think it suffers from sequel-itis at all. :)