NOTHING CAN POSSIBLY GO WRONG in a Q&A, Can It? NO!

It's a busy month for Tanita and I, this merry month of May, so we've decided to feature a couple of guest posts and interviews over the next few days--on the 8th, we're part of Shana Mlawski's blog tour, and today, we're proud to be part of the blog tour for Prudence Shen and Faith Erin Hicks' graphic novel Nothing Can Possibly Go Wrong (which you can sample online here). We reviewed it here a few weeks ago, and you may recall me gushing about it. So of course I'm extra excited to present the following Five Questions with the authors of the book, in which we grill them (nicely, of course) about how the project got started, what the making-of process was really like, and what their favorite comics are. As someone who is hoping to create a graphic novel someday, I always enjoy reading about the process behind the final product, and I hope you enjoy it too!

Special thanks to Gina Gagliano at First Second for arranging the interview. 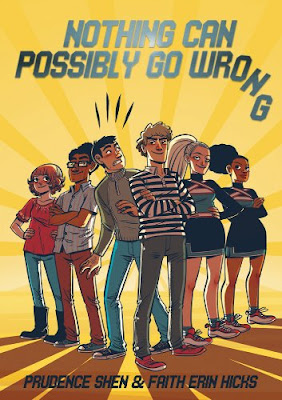 Finding Wonderland: We're curious how a collaborative graphic novel works. On the book's website, it says Prudence did the writing and Faith, the artwork--but did you share both aspects of the project? What did the process look like?

Pru: Nothing Can Possibly Go Wrong started its life as a novel called Voted Most Likely. Faith and I got hooked up by First Second, which had acquired the story with the intention of adapting it as a graphic novel. Faith handled the adaption, and our interaction on the story side mostly involved a little back and forth over how to compress a pretty long book into what turned out to be a pretty long graphic novel, but it all went remarkably smoothly from my end. I think it helps that we appear to share a sense of teenaged humor.

Faith: Nothing Can Possibly Go Wrong was originally a very funny prose novel that Prudence wrote and I adapted from prose to comics. So I had to take this long story with lots of words and no pictures and cut it down into a 250-ish page graphic novel. Which was really hard! I had to cut a lot of stuff. Nate actually had a family in the original novel, but he doesn't in the comics. I assume he just lives under Charlie's porch or something ... Anyway, I read the book that Pru wrote originally and made a story outline based on that book, where I picked out all the scenes and story moments that I liked best, and that I felt would contribute to a great comic. That outline got sent to Pru and when she approved it, I went back and wrote a script based on that outline and the original novel. Lots of trimming and hacking away here! I cherry picked dialogue that I liked best, re-arranged stuff so that it fit better in the overall story, and added things here and there for clarity. After the script got approved by Pru and our editor, Calista, I drew all 280 pages of the comic. I maybe went a little insane drawing the robot fight scenes, they were hard.

FW: Where did the initial idea come from for Nothing Can Possibly Go Wrong, and what were the beginning stages of the project?

Pru: The initial idea for the book really grew out of a pretty fixed scene: a bunch of teenagers roadtripping it to a battlebot competition. It was important to me from the start that they did this in a car that had been "borrowed" from one of their parents. As I started to expand on the story, I realized I wanted to bust as many typical teenage conventions as possible, not just break barriers between geeks and jocks, but to point out that all of these divides and demarcations are completely artificial. At our core we're all insecure weirdos, especially when we're teenagers.

Faith: For me, my editor at First Second, Calista, approached me and said she had this novel that they were planning to adapt into a comic, and was I interested? I read Prudence's original novel in a coffee shop over the span of a couple days, and liked it very much, so I signed on. 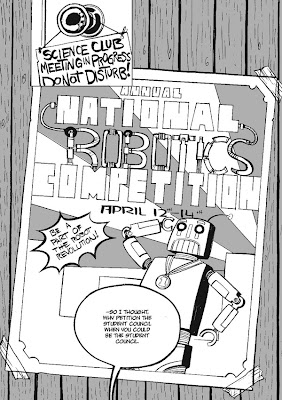 FW: What was the biggest challenge for you both in working on this? Faith lives in Halifax and Prudence in NYC--were there geographic hurdles, or did the internet fix everything?

Pru: Got it in one. The internet is magic, truly.

Faith: For me the biggest challenge was drawing all the robots! There wasn't really an issue of geography as we weren't working closely. I had regular discussions with our editor in New York, and that's all done by phone and email. That's the nice thing about this information age, I can live practically on the very end of Canada, in the cold of the Maritimes, and still work for a New York publisher.

FW: Speaking of the internet, this book also exists as a webcomic. For each of you: what is your favorite format for comics? Webcomic? Serial comic? Graphic novel? Why?
Pru: I dig webcomics as well as graphic novels. Webcomics because they're kind of our digital equivalent to the funny pages, and you can consume so many different art styles and personalities, everything from Bad Machinery to Sinfest. For the purposes of Nothing Can Possibly Go Wrong, I think that the web comic format could be a touch torturous, as the way the story is structured is meant for reading in a graphic novel format.

Faith: Graphic novel, for sure. I believe very much in the importance of digital comics and webcomics, but for actually sitting down and reading something, I like a nice thick graphic novel. I do most of my reading in bed, and I don't have an iPad. I like webcomics a lot, but I mostly use them as previews: if I see a webcomic I like, I'll buy the book version of it.

FW: What originally got you interested in reading (and writing comics)? Do you have a favorite comic or GN you've read recently?

Pru: At heart I'm still a prose storyteller, and I definitely got my start reading books like Little House on the Prairie or watching TV shows like The X-Files and wanting desperately, desperately to be allowed in on those adventures. In some way I'm still writing for the same motivations; I'd have killed to be in that stolen SUV, driving to Atlanta for the Robot Rumble. As for comics, I grew up on manga and Chinese graphic stories (illustrated versions of classics like Journey to the West and a Dream of Red Mansions and various ghost stories and fairytales), so the format of pictures to go with the words has always been really pleasing. On the subject of serials, I'm really only just getting into those, having been seduced by the new Hawkeye comics.

Faith: I've always been very attracted to the comics medium, although for years I didn't read many comics due to issues of availability (the town I grew up in didn't have a good comic store, and this was before libraries began stocking graphic novels). As a Canadian kid, I read a lot of Tintin and Asterix growing up, but then stopped reading comics in my teens when there wasn't much being published that was, well, something that a girl could read. So I started making webcomics, and made the type of comics that I wanted to read, and just fell in love with the medium. And then it was five years later and I'd drawn nearly 1,000 pages of comics ... it was a bit crazy. As for what I've read recently that I really liked, I liked Bad Machinery volume 1, I loved the conclusion of Naoki Urasawa's manga epic 20th Century Boys, and I got Hayao Miyazaki's Nausicaa Of The Valley Of The Wind box set for Christmas, which was amazing.

Thank you, Faith and Prudence (wow, that sure sounds...historical) for stopping by and revealing some of the secrets of the trade--I can't be the only one who thinks this was a fabulous collaboration, and I'm sure plenty of other readers are hoping to see more from the two of you, separately or together.

I HAVE TO HAVE THIS BOOK! Will check the publication date and see when I can have this.

Because I loved their first project together so much, I was all over this. I love the artwork. I love that somewhere, things like Maker Faire and Junkyard War-style Bot Battles still exist, and that graphics exist to celebrate them. This was fun.