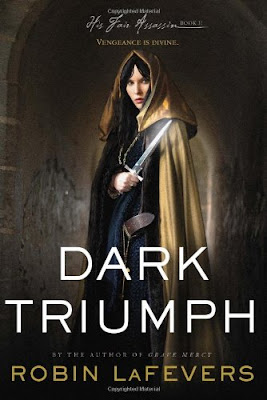 Reader Gut Reaction: I adored the first book in the His Fair Assassin trilogy, Grave Mercy (reviewed here), so I was all over reading Dark Triumph and continuing the story of the deadly female assassins dedicated to Saint Mortain. In the first book, we were introduced to Ismae, who fled a sordid live and abusive marriage in 15th-century Brittany to join the convent at Saint Mortain. The second book continues the story, which left off as Ismae fled to Rennes with a small group of loyalists devoted to the young duchess, determined to fight off both the invading French and the scheming, dangerous Count d'Albret.

This installment proceeds from the point of view of another of Saint Mortain's blessed, the seemingly harsh and careless Sybella—who finds herself questioning her faith and the abbey of Saint Mortain's methods as she is assigned to a horrifying task: returning home to Nantes to work undercover on behalf of the abbey and the duchess. In return, the abbess promises Sybella that she will be able to have her revenge on d'Albret and her entire revolting family, but of course nothing is as simple as it seems.

Concerning Character: Ismae had an underlying sweetness that made an intriguing and satisfying backdrop for both her difficult life and her new deadly skills. In contrast, Sybella is difficult, angry, and conflicted—and with good reason. Her family's entire modus operandi is treachery, violence, fear, abuse, and manipulation. And in order to enact the ultimate revenge on her family and d'Albret, she must become the very thing she hates. Is this really what Mortain wants for her? Her struggles with faith and identity are wrenching and feel very realistic, though this is at heart an imaginative historical fantasy; the strength and vividness of Sybella as a character carry this story along and keep us rooting for her even when it's hard to see how she can survive unscathed.

Recommended for Fans Of...: Fantasy with strong female characters—the Graceling books by Kristin Cashore, for instance, or anything by Tamora Pierce.

Themes & Things: You are not your family: this is the message that Sybella must learn to accept over the course of the story. She is torn apart inside by her hatred of that unavoidable link with her almost impossibly horrific family, and the fact that she has an ally in her brother Julian is no less repulsive, because love and fear and wrongness are all mixed up no matter which way she looks. In a family where abuse is constant and commonplace, Sybella's service to the convent seemed like a heavenly escape. But sometimes the only way to banish one's demons is to vanquish them face to face. It seems like an impossible task—impossible that she'll succeed, and impossible that she can survive intact. But courage and love and faith come in many forms, too; there's not necessarily one right path, and learning this gives Sybella the strength to find her own way. Um, with a little help from a rather impressive arsenal of assassin's tools….

You can find Dark Triumph by Robin LaFevers online, or at an independent bookstore near you!
Posted by Sarah Stevenson at 8:00 AM
Labels: Adventure, AF, Fantasy/Sci-Fi, Historical Fiction, Reviews, Suspense

This is me, closing my eyes, and not reading your review, since I'm halfway through this and was planning to review it on Wednesday!!

Oh, ack! Sorry! Of course, you should feel free to review it, too, if you're so inclined. :)

It's only rarely that we actually do this - but we had a loooooooong wait-list at our library, so I'm just now getting it, even though I have been waiting since February, at least! But, that's okay. I'm just not reading yours 'til I'm done writing mine!