"Spare some change?" Another 5 & Dime Friday! 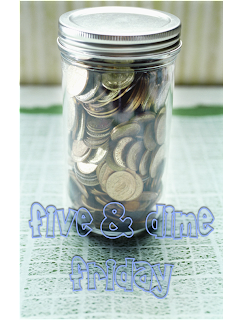 My dear, dear teacher friends, the universe has heard your cries. The school year is ALMOST OVER! And dear, dear student friends: hold on just that little bit longer... it's almost over. Also, dear, dear parents... well, the choruses of "I'm Bored" are about to begin soon. Brace yourselves!

Seriously, Happy (Nearly) Summer to all. My sibs are out, trying to sleep 'til noon (my parents are better not be having it, as they made ME get up at six, even in the summer), and everyone is job-hunting and hoping to find space at the junior college for summer courses (woot! more educational funding for the State this year means there ARE summer courses), and the usual shuffle is going on. We're looking forward to summer changes here - AF is going on a long journey with a dark-haired man (and she didn't find this out from a fortune cookie!) and I might be packing up my house and moving... AGAIN!!! Meanwhile, as we live in the moment before the dice falls, here's some small change to rattle in your brains: 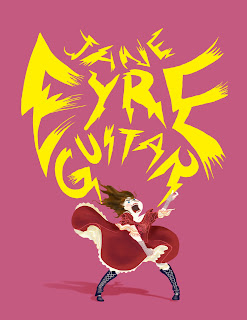 Because one must lead with the ridiculous: Jane Ayre Guitars. Brought to you by Lady Puns, and a quirky Hat Tip to The Mary Sue. You're welcome.

Man, that Jeremy Lin: the Chinese-American basketball player who changed EVERYTHING for the NBA. Suddenly, it's not outside of possibility that a.) Chinese-Americans are tall, b.) Chinese-Americans are awesome at bball c.) that Chinese-Americans can be sports icons. It's amazing how much one guy did to change American perceptions - perceptions some of us may not have realized we've held onto. Imagine if something like this happened in children's lit. I kind of thought that once Gene Yang won the National Book Award with a graphic novel - blindingly taking people by surprise. Or, when Sherman Alexie had won the National Book Award that'd be a game-changer in terms of realizing that books about brown people didn't need to be relegated to the Books About Brown People shelf and/or section of the bookstore, but ... no. Change for books is, I guess, slower? (OR, ALA based? And no other awards matter?) CBC Diversity longs for our own version of YA Lit "Linsanity."

Come win this short-short story contest! My friend Ethel is the prize! Okay, only in the most esoteric manner of speaking. But, still: Ireland. Castle. Ethel. = YES!

Hat tip to Diversity in YA: May's diverse YA book releases. Hope June brings on even more fab.

Two words: email apnea. Oh, the big, black hole of SUCK that the internet can be. And now, it has health issues? Hat tip, Gwenda Bond.

In grad school, our professors talked frequently about the difficulties of writing other cultures. The rule was simply to do it RIGHT. In the category of Don't Be A Dork, here's how to use parts of other cultures in a way that isn't appropriating-because-I-think-it-sounds-cool. Sometimes that feels harmless... but is it?

I'm proudest of our recent interview with Shana Mlawski, (HAMMER OF WITCHES) because it covered so much intelligent, stop-and-think-about-it territory. Can't take credit for the sharpness of that interview, though: that's just how she rolls. Check her out at DiversifYA.

HEADS UP. This is longer piece I've collected that I want you to read, but it's well worthwhile; please set aside some time to really read this. It's about the unexotic underclass.

Don't know what that an unexoctic underclass might look like? Well, you've heard of it - Colleen @ Chasing Ray has talked a LOT about how YA writing excludes the middle class, and normalizes this ridiculous place of privilege (remember the girls hopping on the plane in The Traveling Pants - because EVERYONE can just GO to Greece when the mood strikes. Money, passports - sure). We had an entire "conversation" about this a few years back with the What A Girl Wants series. Why are middle-of-the-road families and people excluded in both literature and in technology? Because there's no fun apps for a lot of the "boring" world that regular people inhabit. Is there a way to make "regular" more real to those in charge of pushing change and growth in our world, through our literature, technology and media? While this piece from MIT graduate C.Z. Nnaemeka isn't at all about writing YA and fiction, it's to me so VERY indicative of a lot of what's behind the WHY of the single-story-dominant-culture-wealthy-Americus-generica. Remember author Chimamanda Adichie talking about the danger of a single story? Yes. This is when we start promoting other lines of narrative, in our heads, on paper, and in the world. This is how. Please read this. I know it's longer, but your attention span can handle it, I promise.

There's a lot of geekitude joy for me going on this summer. I'm going to my FIRST CON - and it's the Discworld Con, which is staggeringly squeeworthy unto itself, but I'm going to be on a panel - WITH Charlotte, and The Famous Cybilsian SHEILA, which is even better. I'm watching Charlotte on another panel talk about time-travel, I'll see costumes and might wear one - which is so much awesome it makes me alternatively twitch with happiness and want to hide. I'm also eagerly awaiting a new Tamora Pierce book this fall - which means, gosh, it's almost time to reread the whole Winding Circle group of books, so I'll be ready for BATTLE MAGIC. Man. There's nothing like waiting for a book from an author you love. NOTHING.

I may have mocked Texas in the past. Okay, I mock Texas frequently. I mean, Houston, we have a problem. Giant snails?? I cannot apologize, this is simply mockworthy (also: cringeworthy). It's not just Texas, of course, with the PROBLEMS. Australia has had issues forever: EVERYTHING there is meant to kill me. I am not going. Or, I wasn't... I just found out my friend Lana has returned to her native Perth after nearly as long as me in Glasgow, so now I might have to visit... also, I might be enticed to Oz for the giant pink fluorescent slugs. I mean, because Slugs! Giant! PINK! So, yeah. Australia. Is. Amazing. And still scary.

And my pockets are only holding lint! Much joy to you this weekend.

Posted by tanita✿davis at 11:22 AM
Labels: Happenings

Tammy's giving me a daily count of how many days of school are left--still a few weeks here. I always enjoy the kids being out of school, at the library and at home.

I'm glad Discworld Con worked out. I am hoping to start the second Discworld book soon. Between that series and Game of Thrones, my reading time is well filled for the next few months.

I'm still not convinced about Discworld until we get the program in print! But are you really going to wear a costume? If I had masses of occult jewelry, I could be Magrat, but I don't.

Thanks for the other links too! What I can't understand is why no one noticed the GIANT PINK SLUGS earlier.

"What I can't understand is why no one noticed the GIANT PINK SLUGS earlier."

Me, too! But I'm so happy they are here. There is something wonderful about a world in which we can still discover things like giant pink slugs.

Those are some seriously PINK slugs. Good gravy.

YAY for a new Tamora Pierce! And I love the Jane Eyre Guitar.