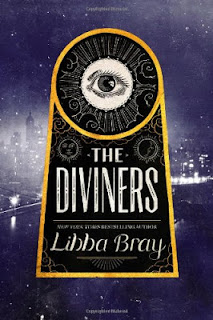 Reader Gut Reaction: The Diviners is a tome. There: I said it. I have to admit that my first reaction was to be a little gobsmacked at the size of the hardback library edition. But once I started reading, I got so absorbed in this supernatural mystery, set in the 1920s—paranormal powers! mysterious strangers! ancient evil! creepy old neighbors! flappers and Ziegfeld girls!—that when I got to the end I was relieved there's going to be a book 2. Also, I was happy to see Libba Bray going back to historical fantasy, because she imbues past eras with a lot of life and wit, as in her Gemma Doyle trilogy. While I felt certain aspects of this book were overwritten—there was the occasional rather lyrical, omniscient-viewpoint, sweeping-cinematic-style intercalary chapter, and for me, they interrupted the action a bit more than I wanted—I found myself happily carried along as events in the book got increasingly suspenseful.

Concerning Character: This book is rather epic in terms of its characters, too. The main character—the one for whom the majority of the action takes place—is Evie O'Neill, who has been sent off to New York to live with her Uncle Will after she horrifies her Ohio family one time too many with her scandalous behavior. Naturally, as a modern flapper, she takes to the big city like a fish to water. And, rather appropriately, as it turns out, her Uncle Will owns a museum of the occult.

Evie, who is stubborn, troublesome, and irrepressibly fun-loving, has a supernatural secret of her own…as do many of the characters in this book. Memphis, a young black numbers runner…Theta, a Ziegfeld chorus girl who lives in Evie's apartment building…even Jericho, who works for Uncle Will at the museum. All are intriguing, and all are to play a vital role in thwarting an insidious evil that is spreading around the city and leaving a trail of bodies in its wake.

Recommended for Fans Of...: Epic good-vs-evil supernatural battles in an urban fantasy setting, as in Cassie Clare's Mortal Instruments trilogy, or The Unnaturalists by Tiffany Trent (reviewed here), especially if there's a mystery/whodunit element.

Themes & Things: The Roaring Twenties—what a setting to provide a glittering backdrop, and what an enjoyable way to sneak in historical material like the rising tide of Marxist political thought, the strange-but-true beliefs of fringe religious groups, and the increasing prominence of women and African Americans that was happening at that time in America's past. Besides the grand historical themes, though, there is the overarching idea of adhering to what is right and good, and holding onto love even in the face of unspeakable evil and overwhelming odds.

You can find The Diviners by Libba Bray online, or at an independent bookstore near you!
Posted by Sarah Stevenson at 4:43 PM
Labels: AF, Fantasy/Sci-Fi, Mystery, Reviews, Suspense

Man, I don't know why I keep forgetting about this book!!! Yeah, the size seems a bit daunting. But I'm very curious about it.

This sounds really interesting. I am putting it on the wish list.

I kept forgetting, too!! Then I did my usual browse through the new YA shelves at the library and it immediately caught my eye. I think you'll enjoy it--it was a good combo of murder mystery/suspense and supernatural fantasy.