You said you were over vampires, right? You were, uh-huh. Then explain why you're looking forward to seeing that Abraham Lincoln, Vampire Hunter thing. And why the Van Helsing name still provides a flicker of interest...?

Yeah. I know. Sometimes the vampires just get you anyway.

Reader Gut Reaction: Full disclosure - I am a dork, and read these books backwards. NetGalley had the second one, and I didn't realize it wasn't a FIRST until I started reading it. I frowned a bit - there were several descriptions that read like summary - and I started feeling like I should have been present as a reader in some of those scenes. I was confused - the author, some of whose books for adults I have read, is usually much, much, MUCH better than that.

So, imagine my relief to find I was reading Book 2. Well, okay, then.

In Book 1, After Midnight, Catlyn Youngblood lives with her two brothers, moving around the country. When they finally settle into the podunk town of Lost Lake, Florida, she's secretly relieved - maybe now they can have a somewhat normal life instead of bouncing around so much. Her brothers are so much older than she is that they're ridiculously overbearing and overprotective - but they're trying desperately to take care of their baby sister, and be parents to her.

Catlyn would like to be understanding of this, but it not like they're her real parents, thank you. Catlyn would like to be left in peace. Escaping her brothers means riding on her horse at night. When she meets another night rider, she's intrigued. He's cute, doesn't go to her school, and ...has secrets of his own. Jesse Raven is the perfect secret to keep from her brother - but eventually, truth will out, and it turns out what each of them was keeping a secret was something which could destroy them - and their families. 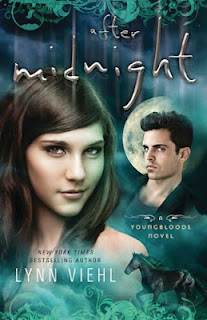 The action in Book 2 continues - in spite of everything, Catlyn and Jesse are still friends - but now their friendship is the secret, as neither family is in favor of their continued association. Now Catlyn decides to get a job in town in order to still see Jesse -- and knowing that her brothers will completely freak if they find out does nothing for her. She is biding her time until she's eighteen, and has plans to sue for emancipation status. The job Catlyn interviews for is easy - it's just sorting through some rare old books which the local bookstore has inherited on the death of the neighborhood recluse. It's what Catlyn finds in those books - together with the disappearances of girls in Lost Lake - that turns out to be a chilling discovery. Once again, Catlyn's secret life is impinging on her new life -- and at the novel's end, it's clear that this won't be the last time...

Concerning Character: Catlyn is a realistically written and reasonably likeable character -- not someone I'd expect to seek out as a buddy, but she doesn't make me want to throw her somewhere. I will say that I hate her name - Tally Youngblood is what I kept finding myself calling her. Cally, even. There seems to be room for only one Youngblood clan in my mind. Anywho. Jesse Raven is, of course, impossibly good looking, but someone not as annoying as boys in books with sparkling, shiny, sweaty muscles and names that begin with E, or J. This book is surprisingly light on romance, for all that Realms of Fantasy described it as "Twilight crossed with Romeo and Juliet." (That description is only missing Jane Eyre to be my personal triumvirate of favorite books. Not.) That's actually kind of a relief, because the rest of the situations are potentially so heavy - it'll be interesting to see how long that will last, and whether or not emotional entanglements are taking a back-seat because of constant danger, or what... and how long that will last.

Recommended for Fans Of...: the Alyxandra Harvey "Drake Chronicles" books - those human-vampire hybrids were my first thought on reading this series. Harvey uses much more humor, and the characters, despite their danger, take themselves much less seriously. The Drake Chronicles romance is definitely more intense and immediate - so I'll be interested in seeing how long Viehl keeps this series light. 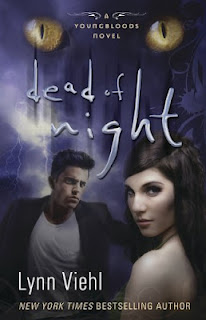 Cover Chatter: Is it just me, or does the character drawn as Jessen Raven look... a little... old? I recognize that he's supposed to be dark and dangerous-looking, but on the second cover especially he looks like a reject from a Broadway production of Grease 2. With the everlasting white tees, I hoped that maybe this was meant to be one of her brothers, but that smoldering look in his eye says no. Hm. It's a passable, but fairly clichéd effort - but, what would a YA cover be, without a girl showing bare shoulders and/or long hair? At least she has a head and somewhat of a facial expression. Somewhat.

The Stardoc series, and adult SF/romance series which she began publishing in 2000 (the most recent - last? - was published in 2010), is how most SF readers know the name Viehl - here's hoping this prolific writer's new efforts in the YA field are as fruitful for her.

Thanks to NetGalley for ARC copies, courtesy of the publisher. All opinions my own.

Newly released this month, you can find AFTER MIDNIGHT and DEAD OF NIGHTby Lynn Viehl at Flux's online site, or at an independent bookstore near you!

Posted by tanita✿davis at 3:59 AM
Labels: Fantasy/Sci-Fi, Romance

Heh. Your cover chatter cracked me the heck up.