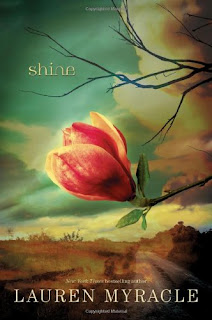 Reader Gut Reaction: I have to admit, all that book award controversy was what drew me to Lauren Myracle's Shine, which was on display at my library. The good part about the controversy from a publicity perspective is that I learned a lot more about the book beforehand, and it was much more apparent on my radar than it would have been otherwise. And, a lot of what I'd read about the book during the context of the controversy was positive buzz, so I was looking forward to reading it.

I was not disappointed. This was a gut-wrenching story about the aftermath of a hate crime—the narrator's onetime best friend, Patrick, was attacked and beaten and left in a coma because he was gay. In the small North Carolina town where they live, homophobia is much more the norm than we like to think about, but Cat knows there's more to it than that. There has to be. Putting herself at risk, she sets out to solve a mystery that the local sheriff seems to have little interest in pursuing. Who's responsible? And could it even have been someone she knows? Cat is a nosy narrator typical of the whodunit genre, and, unsurprisingly, her incessant questioning and pestering catches the villain's eye, which keeps the tension gripping and the stakes high.

Concerning Character: Besides Cat being too nosy for her own good, what I liked about this book was getting to see the development of Cat's conscience and her personal moral code. The very idea of someone being gay, and the very topic of homophobia, tends to raise all kinds of moral hackles regardless of one's opinion, and this book puts Cat in a situation that challenges longstanding viewpoints she was raised with. She is forced to reevaluate her own assumptions about the people she's known all her life, the people in her own small town.

In the context of the mystery, then, Cat not only finds the answer to the question of who perpetrated the crime, she also finds herself, and finds courage she didn't know she had. There are also a range of colorful side characters of exactly the sort you would hope to find populating a mystery: shady drug dealers, friends with secrets, reticent witnesses, and, of course, gossipy old church ladies. The author does an excellent job of differentiating character voices and bringing to life the sound and dialect—not to mention the difficult and often unforgiving lifestyle—of rural America.

Recommended for Fans Of...: Books that take place in a gritty setting, in which the narrator must overcome both environmental and personal difficulties in order to persevere. Fans of Ashley Hope Perez's latest The Knife and the Butterfly (reviewed here) or Siobhan Dowd's A Swift Pure Cry (reviewed here) may enjoy this one.

Themes & Things: The social and personal cost of homophobia is, of course, one of the overt themes of this book. Also, as Cat's world is turned upside down by the crime and its aftermath, and as she reevaluates her opinion of everyone around her, she is also forced to consider the true meaning of friendship and family, and of trust. Staying true to one's personal convictions is also a running thread throughout this book. What probably struck me the most, though, was the portrayal of rural life in a very small town, one rampant with poor education, poverty, limited opportunities, limited access to technology, and too-easy access to drugs. In particular, the growing problem with meth in our small (and large) towns was something that resonated with me, and something that there just does not seem to be enough awareness of. I live at the northern end of the Central Valley, a region that is known as one of the worst in the U.S. for meth-related crime, but the sad truth is, it's by far not the only region with that dubious claim to fame. So I really laud Myracle's inclusion of this serious issue.

You can find Shine by Lauren Myracle at an independent bookstore near you!
Posted by Sarah Stevenson at 8:00 AM
Labels: AF, Mystery, Problem Novels, Realistic Fiction, Reviews, Suspense

I will definitely get my paws on SHINE... I've had it on my to-read list for a while, but it's past time. Thanks for the nudge!

I really liked this one, too. It's specific, in the way it depicts this small town and its particularities (a world we don't often see), but it really hit home, too. It surprised me quite a few times, too, in the direction it took.