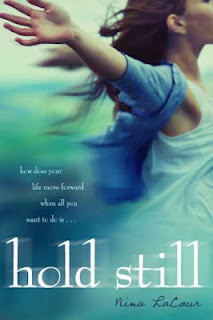 Reader Gut Reaction: There were a couple of things that initially drew me to this book. First, the author, Nina LaCour, is a fellow alumna of the Mills College MFA program. Second, certain aspects of the book bear a disconcerting similarity to my next book due out (scheduled for release next year), and so I wanted to arm/educate myself so that I'd be able to make sure my book is distinctive enough, so I don't sound like I'm rehashing, and also, on a more positive note, so I can consider where my book fits into the market. So I was pleased to find it at my library, since I've been meaning to read it for a while.

Hold Still is a story about grief, about tragedy and its aftermath and how it changes you. At the beginning of the book, Caitlin is returning to school in the fall after a summer that she'd rather forget, but can't possibly: at the end of the previous school year, her best friend Ingrid killed herself. Really, Ingrid was her only friend. So when Caitlin returns to school, she feels lost until others reach out to her: the new girl, Dylan, who everyone says is a lesbian; Jayson, the guy Ingrid had a secret crush on; Taylor, a cute skater boy who never paid attention to her before. Complicating matters even further, Caitlin finds one of Ingrid's journals—her last journal—under her bed, exposing some of Ingrid's innermost thoughts in the months leading up to her suicide, and maybe, Caitlin hopes, answering the overarching question of why she did it.

There are some really lovely moments in this book: Caitlin's relationship with the art of photography, and her discovery of other creative outlets, was one of my favorite aspects of the story. Her developing friendships were also wonderful, as she discovers that there are good, caring people and that she doesn't have to suffer alone. I loved the portrayal of Dylan's relationship with her girlfriend, Maddy, and how welcoming they are. It was a quiet story, very internally focused, but well written.

Concerning Character: Caitlin is a very reserved narrator. Even in the first person, we only get to know certain things about her, and I was left with the feeling of someone very closed-in, very difficult to know. We do get some flashbacks of what she was like before the tragedy, but we only see her in relation to Ingrid, which has the effect of focusing us very strongly on the suicide and its effects. Ingrid herself, we get to see in many forms: her diary entries, which take the form of letters to various people; Caitlin's memories; other people's reminiscences. We clearly get to see the hole she's left, the Ingrid-shaped space.

I really loved some of the side characters in this book: Dylan, Maddy, Taylor, Jayson. They were really amazing people. Almost too good to be true, and very mature for their age—I questioned a bit whether juniors in high school would have such poise and grace in certain situations—but they were likeable and enjoyable to read.

Recommended for Fans Of...: Books about struggling through the aftermath of a tragedy to emerge from the other side, like Try Not to Breathe by Jennifer R. Hubbard (reviewed here) and The Freak Observer by Blythe Woolston (reviewed here).

Themes & Things: Above all, this book is about coping with grief and loneliness and despair, about the survivor's guilt that happens when someone you love decides life isn't worth living anymore. It's also about learning to open yourself up again to hope, to love, to friendship, even in unexpected places. Maybe especially in unexpected places. The only way out is through, and it isn't easy, but Caitlin's story shows that sadness shared can be sadness halved, that living alone with grief isn't the only answer.

You can find Hold Still by Nina LaCour at an independent bookstore near you!
Posted by Sarah Stevenson at 8:00 AM
Labels: AF, Problem Novels, Realistic Fiction, Reviews