Our occasional co-blogger CitySmartGirl tipped us off to a fascinating NY Times article on reimagining the covers of some literary classics to make them more appealing to teen readers. The reception, as you might imagine, has been mixed. The reasoning behind the change does make sense: "Alli Brydon, the editor of the series, dismissed more traditional covers as too 'Victorian' and 'old-fashioned' for teenagers," plus they tend to be muted, quiet, and portray the protagonists as older than the young adults they often are. 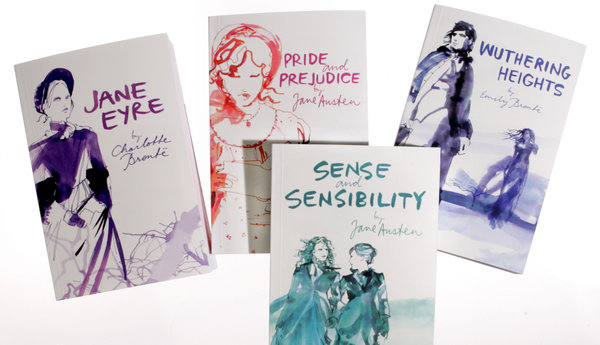 By contrast, the owner of Book Passage (a bookstore here in the SF Bay Area) said that the repackaged classics don't always sell well: "If kids want to read ‘Emma,’ they want to buy it in the adult section, not the teen section....Kids don’t want to feel like they’re being manipulated.” What do you think of the new covers (shown above)? I have to say I have mixed feelings. They're nice, as such, and interesting, certainly, and eye-catching...but I tend to agree with the teenager quoted at the end of the times article--I kind of like my classics to look like classics, or at least retain an echo of their venerability in some way. These say very little about the time period in which the books were written.

Having said that, I don't think it's necessarily a bad thing to update cover artwork. I just think a little more could have been done with these to give them a classic feel while still retaining that loose, modern style. For instance, while I like the handwriting font used for the author names, I don't love the font style used for the titles of the books. Font nerd that I am, I'm convinced something else, something just a bit more "finished"-looking, would work better and make these look less like mock-ups or sketches for covers. What does work for me is that they have a sense of lightness and cleanness, although the Pride and Prejudice cover goes a bit too far with that and implies airiness and lack of substance.

The publisher sent me copies of these, actually, and the promo material didn't say anything about them being geared towards the teen audience. So they struck me as nice, inexpensive editions to bring to the beach. If they've being specifically designed for the teen audience, though, eh.