It's been a busy month, including moving, moving again, and basically catching up with wedding and other family events. Summer daze takes a lot out of a person - but never fear that I'm not holed up somewhere, avoiding everyone and reading to my heart's content. ☺ Well, almost to my heart's content, anyway...

Reader Gut Reaction:Last month, I eagerly awaited a Tor anthology called Fierce Reads, which highlighted YA authors who are now attached to the Macmillan/Tor label. Each of these original pieces is either a prequel or a selection from their books. I selected the freebie reads with the idea that they'd be at least okay -- but was really shocked at how tightly written and excellent some of the pieces were. They made me really excited to read each author's YA book!

Concerning Character(s): ALL of the selections were good - from Anna Banks' “Legacy Lost” - an OF POSEIDON prequel - to the riveting and horrifying psychological thriller depicted by Emmy Laybourne in “Dress Your Marines in White” - unrelated to her debut novel MONUMENT 14 - each selection in the anthology definitely proved its worth. However! I had a couple of faves which I think you'll love, too:

“Glitches” by Marissa Meyer, is a prequel to her novel CINDER, out last December from Feiwel & Friends. Cyborg Cinder is completely sympathetic - so very human, confused, and ...lost. The new home she's gone to is unwelcoming, and she's reminded frequently that she's not entirely human... but she feels so human... even though she cannot cry... I loved the character immediately, for her very humanity, and cannot wait to see what she does. And, I understand there's already a sequel in the works...? 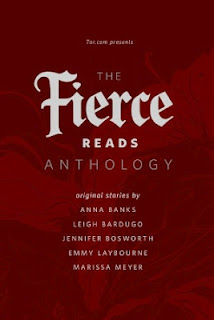 Leigh Bardugo's “The Witch of Duva: A Ravkan Folk Tale” is my very favorite in the entire anthology. It's a tightly crafted story with a solidly once-upon-a-time feel that allows you to get comfortable in the familiarity of the folktale style. But, there are some rather nasty and unexpected turns and you will be surprised... metaphors abound. Especially after reading this short, and then her piece on The Big Idea, I am very eager to read SHADOW AND BONE, Bardugo's debut novel which just came out this past month from Henry Holt. Cybils people, take note!!

Recommended for Fans Of...: Well, fans of Tor books, yes, but one thing all of these novels have in common is that they pit young protagonists against their worlds. Cinder tries to fix things - but has to learn a new way to fix herself, in Monument 14, the whole world is falling apart, and the kids trapped in a superstore - the Walmart from hell, can you imagine?! - have to use what's in front of them to cope; the merpeople war begins because of misunderstanding - and tragedy - but it takes those who still believe in love and its potential to undo the damage. Love novels with strong protagonists of any gender? These will work for you.

Thanks, Tor-peoples, for the freebie reads!

You can find all of the books mentioned at their publisher's sites. Just follow the links!

Sounds intriguing! I'm not familiar with any of the authors, so that's exciting, too--potential new names to watch out for.