I'm always intrigued by herbalists, and herbalists in fantasy fiction are even more fun. Can you really brew a tisane of willow bark which will cure a headache? (Well... yes. But that's a LOT of willow bark to equal one aspirin. And it's nasty-bitter. They rarely tell you that in books.) Will a poultice of onion break up chest congestion and cure typhoid-like fevers? (Um... maybe no. Or, maybe yes? There's sulfites in onions... but are there enough...?) There's a lot of texture and interest in herbs - used correctly or incorrectly - in a book. Throw in a glittering parallel-universe Euro-style court, an oblivious princesse, and sorcery -- and I'm definitely in.

Reader Gut Reaction: This was a complex, detailed, unexpected and arresting book. I wasn't terribly bothered by variations on spellings used in the novel - I think the author did it to try and create her own dialect and give more of a feeling of a parallel universe and a parallel French-style medieval ...English court. Since the medieval people could not be bothered to spell things consistently through the ages, I guess I don't mind.

Be warned: this is book one of a two-book series, and when it ends, you will feel it. There are things unfinished -- annoyingly unfinished, to the point where I was a teensy bit angry with the author. HOWEVER, because this book came out in 2011, the sequel is out, too. Whew.

Concerning Character:I will say up front that Vianne as a bluestocking hedgewitch type is completely believable. She reads obscure things and likes knowing random poets. She takes pride in knowing just the right tincture or leaf to do whatever, and prefers to be in a muddy dress with smudgy boots*. Vianne as a royal lady-in-waiting is also believable - she's learned all the proper forms of address, genealogies to the third and fourth generations; she knows who is important to placate and whom she can cut. She's observant and figures out ways to keep the Princesse in her charge out of trouble, as scandals are always afoot, and though beautiful, her Princesse is ...spoiled, willful, and rather blind to the fact that people back-stab and would like nothing better than to trip her up to shame the King. What Vianne is NOT believable as is someone stupid. There were times in this book that, for all of her other fine qualities, I would have liked to run her over with a horse. She was ANNOYINGLY stubborn, sure that she was so deeply unimportant that no one should turn a hair for her. There's selfless service, and then there's ridiculousness. I felt like reaching into her brain and writing, "NOTE TO SELF: IF PEOPLE ARE TRYING TO KILL ME, IT IS OKAY TO DO ALL IN MY POWER NOT TO DIE. Even learning that she has the ability to wield power in the vast and vicious conspiracy in which she finds herself does her no good. She's just, at times, a total featherbrained milksop. 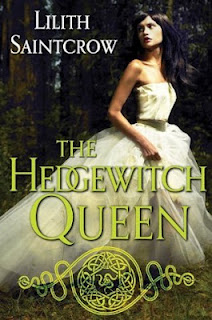 THAT ASIDE, I liked her.

Recommended for Fans Of...: Novels in which it looks as if some man must ride in to save the day. See Cinderella, Snow White, etc. In the same genre, but not at all the same, Crown Duel/Court Duel by Sherwood Smith, and Decoy Princess, by Dawn Cook.

Cover Chatter: Dear, dear cover people: NO. Just... no. Remember how we referenced Vianne's hedgewitchery? And how she preferred to be in a *muddy dress with smudgy boots? Uh, yeah. Also, her braids? Are mentioned constantly. Her dress? If dragged like that on leaf-mold would have been muddy. AT NO TIME did she race through the wilderness in a flouncy white gown, her hair down and her shoulders bare. At no time.This is NOT flippin' Snow White and the Huntsmen, all right???

First out in December 2011, THE HEDGEWITCH QUEEN by Lilith Saintcrow is at online and independent bookstores near you! FTC: I bought my personal copy. All opinions and comments my own.
Posted by tanita✿davis at 7:39 AM
Labels: Fantasy/Sci-Fi, Romance

It is indeed a variation -- It feels very traditional fairy-tale, but I don't recognize this one!

Sounds very intriguing. I enjoyed the first book in her Strange Angels series, despite the vampire stuff, but this sounds much more up my alley.