An Ode to Bloody Jack 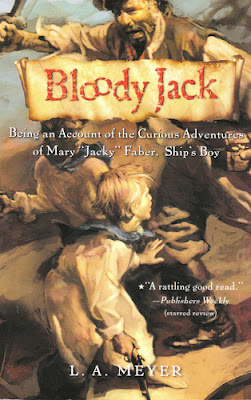 Jacky Faber is exactly the kind of character my childhood self would have adored. As it is, my adult self is gobbling up her stories with a jumbo spoon. I listened to the audiobook version of the first book in the series, Bloody Jack, narrated both ably and commandingly by Katherine Kellgren, and knew I’d have to check out more books in the series.

I've just finished book two, The Curse of the Blue Tattoo, and my enthusiasm for this series by L.A. Meyer is undimished. I decided to go for the traditional ink-on-paper version this time, and though I wondered how the voice would come across compared to the audiobook, I shouldn't have been worried. I did, however, hear Ms. Kellgren's voice in my head from time to time, though that wasn't a bad thing, to my mind.

Anyway, I love Jacky. She's indomitable, spunky, brave, impulsive, a bit reckless, determined, practical, and clever. She's got a kind heart, despite weathering more of the storms of life than most people ever suffer in a lifetime. Her conscience pricks at her whenever her recklessness causes her to take advantage of others' kindness or gets them into trouble—and it often does, as she's a strong, smart, and stubborn young woman living in a time period (the early 1800s) when women's roles in society were still very limited.

In the beginning, she gets away with a lot because she's disguised as a boy; later, in the second book, her boy disguise doesn't get her as far anymore, but her youth keeps her from suffering the full punishment that early U.S. law would prefer to levy for her mischief. I'm very curious to see how this aspect of the story morphs in future books, as Jacky gets older, more physically mature, and (presumably) a bit wiser. 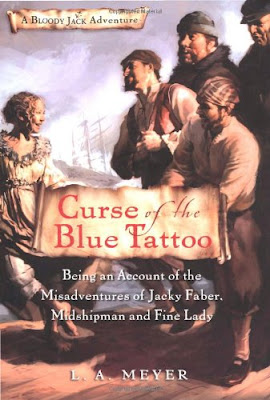 As a writer, I'm impressed by how L.A. Meyer has created a character who is fun and entertaining but also complex and multidimensional. Jacky isn't simply a swashbuckling adventurer—she acknowledges the side of her that is a blossoming woman, at the same time that she resists the strictures that society at the time placed on women. That tension is dealt with very effectively, and in fact ends up getting Jacky into trouble more often than not. It really brings home the idea that if a writer wants to create interesting plot developments in an organic way, you create a compelling character, place her into a challenging situation and let things happen from there. Here, Jacky is placed into exactly the sort of situation that tries her patience and throws up obstacles at every turn—in a way, society is her nemesis.

Besides, of course, dread pirates and cutthroats and ruffians and mean girls.

Note: I am posting the hardback cover images here because I really think the paperback covers are BLECCHHH. Sorry. That's my professional artistic opinion. The hardcover images are just way more evocative and interesting and fun and have that historical flavor. The paperback ones look like photos of a teenage girl at the Renaissance Faire. OK, rant over.

You can find Bloody Jack, The Curse of the Blue Tattoo, and many others by L.A. Meyer at an independent bookstore near you!
Posted by Sarah Stevenson at 4:29 PM
Labels: Adventure, AF, Cover Chatter, Historical Fiction, Reviews, Soapbox

I really loved the character in this book - but I only read the first couple. I, too, wonder how long she's going to be able to swing that disguise thing; the closer a woman was to maturity in that time period, the more disgust the law seemed to have of them. They were seen as both helpless and a scourge - and the urge of the patriarchy was to clap them in irons "for their own good..." I keep expecting that to happen to her!