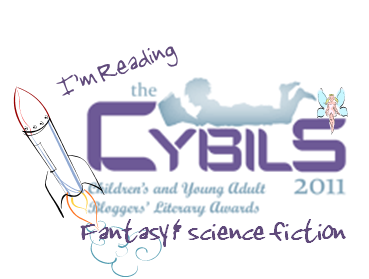 An Irish character named Teagan, which is my favorite Irish name? Check. High fantasy? Check. Strange new worlds? Check. Strong female characters? Check. This novel has in it all the things I love, plus a healthy dose of a happy family and Celtic mythology, and yet, I didn't think I'd like it. I think it was the cover. The tiny print on the cover which assured me that there was a SLJ starred review somewhere about its person gave me an extra nudge to bring it closer to the top of my TBR pile - and I'm very glad that I did.

This novel is, in part, about Irish travelers, and living in the UK, I know that rarely is there mentioned such a maligned and mistrusted group who aren't brown-skinned. They're nomadic ethnic Irish folk, who tend to keep a separate language and who live in trailers (or caravans, as they're called here) and haven't ever fit into normative British society. They're seen as dirty, feckless, thieving, and bad.

"I do not ask for a path with no trouble or regret, Mrs. Wylltson began. Teagan spoke the words with her. "I ask instead for a fried who'll walk with me down any path.

"I do not ask never to feel pain. I ask instead for courage, even when hope can scare shine through.

"And one more thing I ask: That in every hour of joy or pain, I feel the Creator close by my side. This is my truest prayer for myself and for all I love, now and forever, Amen.

(The above is found on pg. 32 of the novel. I'm not sure whether the author made this up, or if it is a genuine traveler prayer, and it is something so beautiful I want to memorize it.)

Reader Gut Reaction: I laughed a lot, reading the first few pages of this novel. Having read a lot of Irish literature in grad school, there are some truly amusing recurring themes, one of which is Things don't go well for the Irish for long and, It's an Irish story - it won't have a happy ending. As a reader, I then knew: all kinds of crap is going to happen here. However: this is a family who is going to keep trying to pull through.

Concerning Character: Teagan Wylltson's mother paints goblins - she's a popular children's book illustrator, and so they're all around the house. Her father is a librarian, and reads Celtic faeries stories aloud nightly. But, please - they're not real. Only Teagan's best friend, Abby, seems to think the ghouls and ghosties are, and she's forever lighting candles at their local for Teagan and dousing suspicious looking guys with Holy Water, just to make sure. (Teagan's pretty sure that Abby reads too many vampire novels.) Teagan and Abby's friendship is true, and Tea's unbothered by her zany - and far more fashion-forward best friend. She is beloved by her family, and her slightly aggravating, but lovable little brother, and her family life is solid. Her focus is on her life goal - to be a brilliant vet. She even puts up with a job socializing a jealous primate - who smears poop on her favorite sweater. It's all about earning the scholarship to the dream college and getting the career of her dreams. No discussions, no deviations, no drama.

Recommended for Fans Of...: The Hollow Kingdom series by Clare B. Dunkle, and The Replacement by Brenna Yovanoff. Yes, I invoked both the Dunkle and the Brenna. It is that good. Other comparisons have suggested the Lemony Snickett A Series of Unfortunate Events.

Themes & Things: This is that special brand of high adventure novel which resembles the hero's journey, except that it has more of a group vibe going on. Our fine hero steps out to sacrifice himself for the good of the clan, only ... that's not going to work. Evil is not going to be so easily appeased. It will take the whole village to rescue the hurt, and bring them back to safety. And then ... everything else in the village will change.

I love that this novel has both ghouls and God. Abby and the Wylltsons are staunch Catholics - one branch Italian, one branch Irish. On the run, the kids cobble together a belief system that's part superstition and part saints, and do their level best. The pacing and the heightened tension, when there's so much at stake, and so much more to lose, really makes the storytelling work for me.

You'll note I'm not telling you much in terms of details. I just don't want to spoil it. 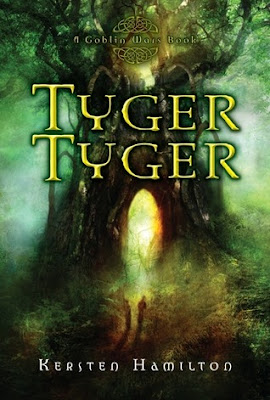 Authorial Asides: In 2008, quietly prolific author Kersten Hamilton was interviewed on Cynsations. She has much that is good and intelligent to say to writers who write for the Christian market and the mainstream secular market, which she does. I'm ... impressed, and hoping to read more of her work for teens, and can't wait to read this sequel. Read Electrifying Reviews' interview with the author.

Cover Chatter: I do not love this cover - the murky colors and the indefinite picture don't speak to me. The book has starred reviews from both Kirkus Reviews and The School Library Journal, but instead of making that proud and large, it's minuscule and I missed the Kirkus one the first time around. I'm not sure I understand what the book designers were up to... but, the story is what's going to sell this, and as others read it, there will be fan art, which will make me feel better!

Read another review of this novel, and a quick author chat at The Enchanted Inkpot.

You can find TYGER, TYGER: Book One in The Goblin Wars at an independent bookstore near you!
Posted by tanita✿davis at 9:08 AM
Labels: Class and Identity in YA literature, Cybils, Fantasy/Sci-Fi, Reviews, Sibling Fiction

I loved Tyger, Tyger!! I'm looking forward to reading In the Forests of the Night.