One of the great joys of the Cybs is discovering that rare new book which hasn't gotten on everyone's radar yet. Other than a fab review from the Book Smugglers of Awesome, I haven't heard this one reviewed many places, and that's a real and serious shame. Pick it up, folks! Part princess tale, part superhero adventure, this novel pivots on what a strong young woman can do, once she sets her mind to it, and re-prioritizes romance to something which keeps the heart warm, but which has to be considered after the important things. (Love is important, romance, less so.) A brilliant debut from the author.

Reader Gut Reaction: If you read The Man in the Iron Mask - or, okay, even saw the movie with whatshisname Di Caprio, you know the trope - royals switched at birth, yadda, yadda, yadda. There's a traditional amount of suspense and derring-do and running around that this trope entails. The author took these familiar things, and somehow, made them live and breathe.
Concerning Character: ...the story, for me, started with disappointment. When I could feel Nalia - or Sinda's disappointment that her life wasn't real, her quiet terror, resentment, and deep, deep hurt, then I was well and truly hooked. The characterizations in this tale are sharply done and thorough. They had to be, or the reader would have balked at revisiting the same old story. But, there's not only newness here, there's a twist.

She's never been all that good at the princess gig, but it was her life, and to be hustled out and shoved away -- with only a small chest of simple gowns and a merely adequate bag of gold -- it breaks her. Now Sinda is at a loss - she tried being as common as she had been raised to be, living with her cold, dyer aunt, but she messes up the simplest dyes and she misses her best friend, Kieran, with what's left of her heart. Finding out she has magic revives hope within her. She returns to the city -- but the college of magics won't have her. A stroke of luck brings her to the attention of a woman who can train her -- and things get better.

Or, they should have gotten better. However, nothing is ever that easy. Some people aren't destined to go their own way - and the needs of the world and of the kingdom turn out to be larger than a single person. Sinda responds to the needs around her, though it might cost her not only the home she's managed to carve out, but her life. 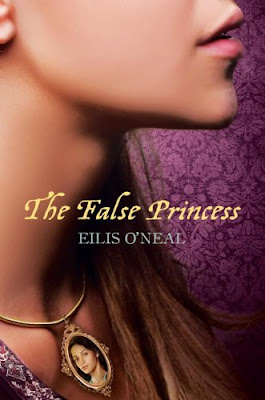 Recommended for Fans Of...: Shannon Hale's The Princess Academy, Alexander Dumas' The Man in the Iron Mask, Northlander by Meg Burden, and the magical component reminded me of Nightwalker: The Warlocks of Talverdin, by K.V. Johansen. (The Smugglers note The Decoy Princess, by Kim Harrison, writing as Dawn Cook, but I haven't read it... it is so on my TBR list, though.)

Cover Chatter: I haven't seen umpteen covers for this novel, which is because the one it has, though using The Headless Girl cover trope, actually manages to do its job - not in any brilliant, notable way, but... well enough. The face in the locket around the headless girl's throat stares unhappily out at the viewer, and we know this is probably Sinda. Sadly, there was no locket in the novel. What was in the story was a birthmark which the princesses shared, and a prophesy... which could have been fairly easily depicted. My only conclusion about this Headless Girl cover is that the designers were afraid of giving too much away...?

Authorial Asides: Eilis is pronounced A-lish, and that's a really righteously Irish first name, is it not? Almost as good as Teagan, Sian, and Aisling. We're really collecting these great Irish first names in YA lit! Anyway, Ms. O'Neal was clearly going to write an excellent first novel because she is the managing editor of the Nimrod International Journal for Prose and Poetry at the University of Tulsa.

You can find THE FALSE PRINCESS at an independent bookstore near you!
Posted by tanita✿davis at 2:33 AM
Labels: Cybils, Fantasy/Sci-Fi, Reviews, Suspense

Glad you did, too!

I reviewed this one...I think my expectations were a tad too high, though. And I continue to be distrubed by the length of the cover girl's neck....

Ah. Hm. Yes. That neck. I hesitated to point that out - I think the artist was trying for swanlike princess-y grace, but ...yeah. If she swallowed a fish, we could watch it go down like we do pelicans...

Ooh, really like the sound of this. And Eilis is such a great name! (Nit-picky me would be remiss if I didn't point out, though, that Sian is a very WELSH name...so, I think, is Teagan, though I'm sure they cross boundaries quite a bit!)

The UK and GB is like a street of houses with shared backyards. A Sian and Teagan I know hail from Dublin, me lass, but okay - it's Welsh, too.