I'm a woman of lists, because I swear my brain leaks out of my ears, and I don't have the excuse that it does that in my sleep.

Memory and its loss is kind of an oddly fascinating YA topic. There are a surprising number of novels, good, bad, and indifferent, on the topic. Perhaps that's because the question What should I do? is common at that phase of life -- and it's made more acute by not having all of the facts.

A compelling moral ambiguity is made more complex by a character not knowing which way to turn -- and if they have none of the facts to propel them toward a choice, the conundrum becomes sharply agonizing, comedic, or wildly dramatic, and the reader is drawn. This is a strangely charming little novel -- long on questions, and pretty short on answers. Sometimes in science fiction, an unclear answer to the questions of "What if...?" is a-okay.

Reader Gut Reaction: If we forget things with our conscious minds, does some part of our unconsciousness/heart/soul remember? This is kind of a weird question, yes, but it's in part the premise of this book. What if all we remembered was the future, but the past was instantly forgotten? In a way, it would be kind of freeing - you could live your life without disappointment or embarrassment. On the other hand, people would hate you, perhaps, or be disappointed in you -- and you'd not really understand why.

It's all about comprehending the world around you.

Concerning Character: This is the little about the plot that I can tell you: Each morning at 4:33 a.m., London Lane's memory resets. If her activities, friends, homework assignments, outfits -- all of her personal details -- if they don't show up on her lists, they're utterly lost in the mists of the past.

London has a plan for understanding her world. It involves lists - detailed lists. Notes in the note function of her phone. Alarms. Memory-joggers. She needs that kind of help, but surprisingly, she doesn't come across as scattered or particularly fey or even terribly troubled. This is just Reality for her, and she Deals, end of story. 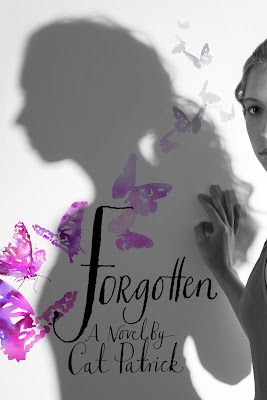 This strange phenomenon has been plaguing London since she was small - she remembers forwards, and forgets backwards. She has a tangled relationship with her mother - she relies on her heavily, because she has to, but as a growing teen has some tiny feelings of ambivalence shaded with resentment toward her. She has one trusted girlfriend - who makes mistakes London cannot tell her to avoid, because she knows it will damage their relationship -- in fact, it already has. London is a medium sort of student - middle of the road gradewise and popularity wise, and in this way avoids the unpleasantness of becoming too involved in the lives of others -- and then forgetting them, but some things are just unavoidable. For instance, London really wants to know who this boy Luke is, who she doesn't see in any future thoughts, but who keeps... showing up in her present.

The day Luke shows up, something else happens. London has a strange, frightening memory -- a vision -- burst into her consciousness. She's pretty sure it means her father - who left her when she was a small child - is going to die. But, isn't she supposed to do something about that? Can she? And incidentally, where's her Dad been all this time? Suddenly, surviving life and dealing with her unique issue isn't enough. London has questions - and the past - and the future - demands answers, or else she may have nothing left but the forgotten past.

Recommended for Fans Of...:Emily the Strange: The Lost Days, by Jessica Gruner et al, Trigger, by Susan Vaught, Memoirs of a Teenage Amnesiac, by Gabrille Zevin, and films like Dark City and The Eternal Sunshine of the Spotless Mind.

Cover Chatter: This novel has had a WEALTH and a plethora of covers.

(Props to The Mile Long Bookshelf for lining them up that way.)
Each cover highlights in some way the absence of London - we see part of her face, but not her eyes. We see her shadow, but only the slightest hint of her person. She is seen both waking and sleeping, in color and in black and white. Is she a real person, or a shadow; a waking dream or a player in her own reality?

I find it interesting - and likeable - that none of the covers show a hint of Luke. The romantic elements, while enjoyable, are just not really the point. At all.

You can find FORGOTTEN at an independent bookstore near you!
Posted by tanita✿davis at 3:28 AM
Labels: Cybils, Fantasy/Sci-Fi, Reviews, Sibling Fiction, Suspense

Wow. I'm glad you reviewed this book, because I forgot all about it. (How apt.) I remember downloading a sample to my Kindle and thinking that I wanted to read the rest. But then life happened. I'll have to pick this up.

Oh, I REALLY like the sound of this one! I immediately thought of that movie Memento (which was great).