This book is a 2011 Cybils nominee for Graphic Novels. 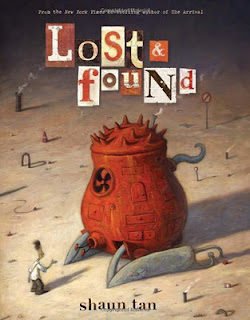 I've been meaning to review this book for quite a while, but I find it difficult to write about Shaun Tan's work. Mainly this is because I have a bit of a professional crush on him, in the sense that every time I read one of his books, I wish I'd done it. And I get floored by the sheer awesomeness of the art and the visual storytelling and then I get all sorry for myself and pathetic-feeling and have to just sit there and remind myself that we can't all be so incredible. So, um, I ended up reading Lost & Found about three times over the course of this year before I felt like I was capable of writing about it.

Reader Gut Reaction: This set of three graphic stories—The Red Tree, The Lost Thing, and The Rabbits (written by John Marsden)--all share Tan's quirky aesthetic, which reminded me inescapably of the books of Edward Gorey as well as the painting of Surrealists like Giorgio di Chirico and Yves Tanguy and the collage work of Nick Bantock and Lynda Barry. That is definitely a compliment, but it's not just the visual style that is so arresting in these stories. Each tale creates an immersive world in itself, with words and art perfectly complementing one another and each story rather wrenching and poignant in its own way, from the pathos of The Lost Thing to the hopeful glow of The Red Tree. The Rabbits, in particular, is worth noting, because it's an allegorical look at the coming of Western settlers to Australia in which the settlers are depicted as the rabbits that they, in fact, brought--and which went on to plague the country and disrupt the ecosystem. 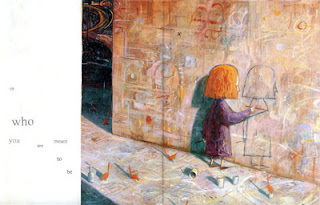 Color is used to great effect, and the large size and format of the book do a lot to make it feel as if the reader is a part of each story's world. And the versatility of Tan's visual style consistently impresses me—from expressive, highly textured and painterly surfaces to intricately detailed scenes populated with fantastical machine-creatures, he seems capable of nearly anything.

Recommended for Fans Of...: Edward Gorey's odd little books, which are collected in the various volumes of Amphigorey, the Griffin and Sabine books by Nick Bantock, and The Invention of Hugo Cabret by Brian Selznick, who shares Tan's ability to tell a story entirely through visual means. If you're interested in lushly artistic visual storytelling, this is one not to be missed.

Authorial Asides: Shaun Tan also wrote Tales from Outer Suburbia, reviewed here, and The Arrival, which I read but apparently did not review. He has a darned awesome website, too, where he explains some of his inspiration and thought process for his books.

Review Copy Source: I acquired an advance review copy of this book from the publisher at ALA Midwinter in Jan. 2011.

You can find Lost & Found at an independent bookstore near you!
Posted by Sarah Stevenson at 2:43 PM
Labels: AF, Graphic Novels, Reviews

I would have been drawn to this by the cover art alone. Glad to know the content is as god as the packaging.

It's not for everyone--I've talked to a few people who just aren't into his work. I love it, though! :)

There is an indefinable sense of sadness - maybe nostalgia is a better word? - in Shaun Tan's work. It's ... I dunno, there's loss and then there's foundness and ... stuff. It's indescribable, but it leaves me feeling a tiny bit fragile sometimes.