2011 Cybils: My Favorite Band Does Not Exist, by Robert T. Jeschonek

In the category of Cybils Books That Mess With My Head comes the one with the Titanic and freakin' werewolves (FATEFUL, by Claudia Gray), that one with the really horrible adult-free school with gangs hideously reminiscent of Lord of the Flies, except with one REALLY AWFUL TWIST (VARIANT, by Robison Wells), and now, well, this one.

Reader Gut Reaction: All the way through this novel, I wasn't sure if I liked it. I was laughing, annoyed, bewildered, and "WHAT?"-ing most of the way through. I was a little jarred by a continuing spoof on a bad fantasy novel -- I kept thinking, "what does this have to do with anything????" And yet: I couldn't put it down. That's got to say something, right?

Eventually, it all works out.
Mostly.

Concerning Character: Well, there's this guy - his name is Idea Deity. He's... um, a little edgy, a little jumpy. He has some odd beliefs, the main one which brings on his mental skitzes is that he thinks he's trapped in the plot of a novel, and that he will kick it in Chapter 64. This is the kind of thing that can seriously "mess your head 'round" as they say in these parts, and put a bit of a dent in your social life. 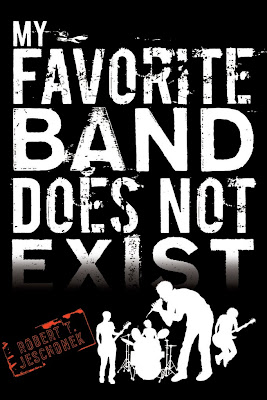 He's on the run from a couple of guys who are either a.) trying to kill him, or b.) trying to keep him away from someone, or c.) trying to get him back to his parents, depending on how Idea is feeling. The girl he runs into at a concert, Eunice, decides to help him - and he wonders how soon she'll regret it.

Idea has had such a sucky life with so many rules that he's always felt hemmed in. The internet has been his salvation. He's created an imaginary world online - and in that world, he's part of a really cool rock band...

Meanwhile, Reacher Mirage is the lead singer of a hip - and super seekrit - band called Youforia. They're super seekrit because Reacher - a lovable obsessive perfectionist - just doesn't think they're ready to hit the big time. Pity that someone else believes they're quite ready -- to the point of broadcasting online where they're rehearsing, what they're rehearsing, and background details about band members, love interests, family members... it's all there on the Youforia website. Someone even knows about his relationship to Eurydice, and it's just in its fragile beginning stages.

It's all crazy. Who knows all of this dirt on them!? They haven't even had a performance yet! And yet: the band is crazy famous. Crazy popular. There are rabid, absolutely nutjob fans.

Idea and Reacher have more in common than you might think. They're both reading a fantasy novel called Fireskull's Revenant -- and as the novel goes along, so are you... 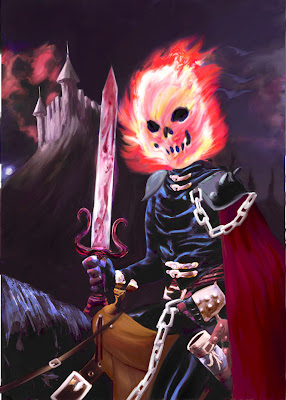 Recommended for Fans Of...: Honestly? I can't even say. This book is like nothing I've ever read. If you enjoyed Sarah Rees Brennan's short story, "Undead Is Very Hot Right Now," from The Eternal Kiss, or "Let's Get This Undead Show on the Road" from the anthology Enthralled, you'll get the sense of humor going on in this novel.

If you like wacky metafiction and reading about the power of the internet, this one's for you. Also, readers who enjoy Phillip K. Dick, Jasper Fforde, and Thomas Pynchon might find this enjoyable, as well as those who enjoy band novels which don't take themselves too seriously...

Cover Chatter:The front cover is a stylish black with a silhouetted Youforia singing their wee hearts out. The back cover is what made me laugh out loud: Fireskull's Revenant lives, people. Flaming skull and all. Check out some of artist James Smith's other work.

Authorial Asides: After you read this novel, you'll want to know who the heck this skewed visionary author might be. I looked him up on Wikipedia, and wow - he's a real fictioneer, a copious writer and while I'd heard of him, I hadn't had the pleasure of the ...mental trip of one of his books. I will say unreservedly that you have to respect someone whose nuttiness is both intelligent and disturbing. He has an unique view of the world, and it really showed in this novel. He writes crime, suspense, and science fiction. Plus some other stuff.

You can find MY FAVORITE BAND DOES NOT EXIST at an independent bookstore near you! Read carefully. If you start feeling like you're a character in a novel do not blame me.
Posted by tanita✿davis at 5:33 AM
Labels: Cybils, Fantasy/Sci-Fi, Reviews

The fact that it can't be compared to anything has me intrigued!