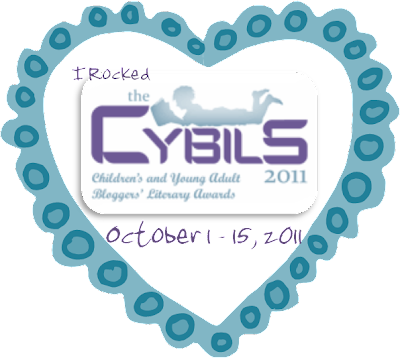 Yes, you've noticed: we haven't had much to say that isn't specifically book-related around here lately! A.F. and I have been working away at our version of NaNoWriMo, which in our case is National Novel Oh, For Heaven's Sakes Just Finish It Month (NaNoFiMo for short), which, owing to our vast knowledge of ourselves and our general panic level, goes on for two months instead of one.

I just finished a massive, brain-draining project and some small revisions on something else, and The Race Is On to finish one last thing before the end of the year. Meanwhile, A.F. has received some excellent news about a project of hers, and now has this one last project to go...

And, then there's the Cybils. Just to keep things interesting.

Of the 171 books nominated in Fantasy & Science Fiction, of which there are quite a few dystophias - some just randomly grim and filled with mayhem, others thought-provoking and classics-in-the-making; a few funny, mostly a lot of romance, relationships and revenants -- bring on the undead emo! -- I have to admit that I am not quite at the halfway point in my reading.

Yeah! I know. I'm disappointed in me, too.
Partially, it's because some of the books haven't arrived, or, won't arrive. Partially, it's because I've been distracted by three other projects, and with a holiday in there, and a Christmas concert after which my train was canceled and I got stuck in Edinburgh on a Sunday afternoon (with no book in my bag!!), I lost my A-game. But, now I am down to one more concert, only finishing one novel(!), and doing One Big Fat Read. I can do this.

Well, it's a MAYBE on the novel. I'm hopeful I can do that.
But, I know I can do my Cybils reading.

That's one of the more fun things about taking part in the judging each year. It's not just the singular joy of discovering fresh, unique storylines that you enjoy that you haven't heard people talking about, and that you can talk up on your blog. It's also a personal challenge, and a feeling of accomplishment, and the fun of wallowing in the riches of stories and not feeling the least bit guilty about all of the people you're ignoring to do so.

The real trick is to figure out a way to always live like this.
~~~

That was LITERALLY the DHL guy just now. I have another box of books... and I'm off.

-- Later.
Posted by tanita✿davis at 7:01 AM
Labels: Cybils News

I so appreciate that you wrote the post I've been procrastinating on writing. :)

I'm looking forward to my Cybils Round 2 time...I already have a graphic novel review I need to write up, and then I should be on the lookout for more at the library! But only after this semester is over...