I checked this book out at my library. 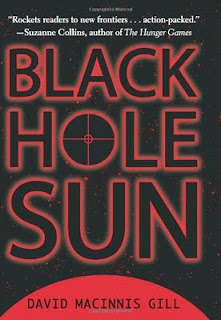 Reader Gut Reaction: After the zany ride that was David Macinnis Gill's first novel, Soul Enchilada, I wasn't sure what to expect from Black Hole Sun. But I figured, I'm a fan of the song of the same title, so I was already positively inclined before even reading page one. This time, the author forays into science fiction, namely a sort of dystopian/post-apocalyptic Mars. Narrator Durango leads a mercenary platoon-for-hire, a motley band of misfits with, of course, hearts of gold (and, in Durango's case, an extra AI named Mimi implanted in his brain). The story is action-packed, full of snappy dialogue, and sure to satisfy hard SF fans.

However, a nit-pick, if you'll allow it. I couldn't help noticing that the timestamp on the chapter headings reset to zero at some point and was zeroed out for each chapter thereafter. I don't think that was deliberate. I suppose I only noticed because I like to read that stuff, and to have a sense of the story's timeline as it moves forward.

Concerning Character: Durango is a fun character to follow, as we gradually discover his unusual backstory and the various skeletons in his closet. The author does a nice job of developing the character of the protagonist and revealing more and more about him without skimping on action and forward movement. The side characters are mostly foils for Durango, providing a few obstacles and a liberal dose of humor and comic relief—except for his second-in-command, the dangerously hot Vienne, and his AI implant Mimi, who has a whole backstory of her own.

Recommended for Fans Of...: If you liked the TV series Firefly, you might like the feel of this one—like that show, this book provides a backdrop where anything and everything crazy might happen, out at the frontiers of human space settlement. It may also appeal to fans of other space sci-fi with YA appeal, like John Scalzi's Old Man's War books and Across the Universe by Beth Revis (reviewed here), and fans of humor-infused Mars sci-fi series The Company by Kage Baker.

Themes & Things: Durango's struggle against the pressures of family loyalty versus the need to do what's right and follow the Regulator principles he believes in makes him a layered character, and his internal conflict informs the story throughout. The book also poses the question, are all bets really off, even when you live in a wild and out-of-control society? What about your innermost ethics? We find out what Durango's made of when his limits are tested in a variety of ways, on a foolhardy mission that seems doomed to fail.

Authorial Asides: You can follow David Macinnis Gill on Twitter at http://twitter.com/thunderchikin. His official website is http://davidmacinnisgill.com/. And, hey, one more thing—it sounds suspiciously like his next book, Invisible Sun, might be a sequel (and it echoes ANOTHER great song in its title, thus guaranteeing that I will need to read it).

You can find Black Hole Sun at an independent bookstore near you!
Posted by Sarah Stevenson at 8:00 AM
Labels: Adventure, AF, Class and Identity in YA literature, Fantasy/Sci-Fi, Reviews