Diversity in YA Kicks Off Tour at SFPL 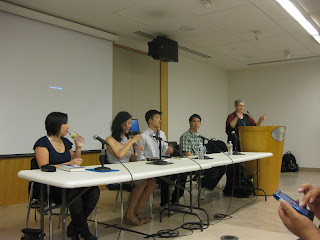 ...and I was there to witness it! If you don't know Diversity in YA, I highly suggest a visit to their website. It's an endeavor that celebrates and spreads the word about diversity in books for young people, founded by authors Malinda Lo and Cindy Pon.

The first tour stop, this past Saturday, included both of the aforementioned ladies of YA, as well as graphic novelist Gene Luen Yang (interviewed by us here some years ago) and author J.A. Yang (Exclusively Chloe). For a few more photos and a short recap of the wonderful sponsors, check out the DIYA website. (Sadly, since I was sitting on the very end of the front row, I am not pictured in the photo of the gratifyingly large audience, but I assure you I was there.)

Here are a few favorite highlights from the panel: 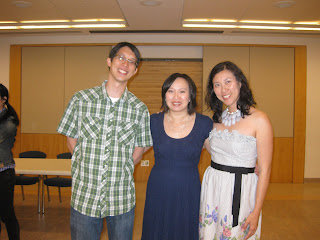 All in all, it was a wonderful panel, and I wish I could have stayed for the book signing and refreshments afterward. Still, it was great to meet the panelists (I made sure to show up a little early!) and I'm hopeful that they get as fabulous a turnout at their other tour stops.

I wanted to throw one last question out to any writers reading this post—the same question asked of the panelists: If you write stories with protagonists of color, when did you first think about doing that, and why?

For me, identity has always been an important theme in my writing, including the different factors that constitute identity, such as ethnicity. So it wasn't long after I decided to pursue writing that characters of color started to pop up, sometimes as minor characters and other times in starring roles. But the writing I did when I was younger—when it was still a hobby—had a noticeable lack of diversity, and I assume that's because I was trying to emulate the books I loved to read...many of which did not feature characters of color. (Not that that reflects badly on the books I loved—it's simply a fact.) What about you?
Posted by Sarah Stevenson at 3:23 PM
Labels: AF, Author News, Ethnicity and YA Literature, Happenings, Views

It sounds like a great evening--thanks for the report! I'm hoping to make it up to the Boston stop on Thursday, D.V. I'll be a squeeing fan girl mess....

Gene. Luen. Yang. Is. So. Cute.
Yes, that's my intellectual contribution to this whole conversation.

>>If you write stories with protagonists of color, when did you first think about doing that, and why?<<

Well, I think that I, like so many young writers of color, tended to write the mainstream, that is, my characters were the people I found in the books I read... that is, CAUCASIAN. Until I was in grad school trying to wrestle with writing personal stories, and I realized that I could write personal stories which didn't have to be particularly "ethnic," but just about ...ME? Then I was like, "Well, okay, then," and the diversity roared into life. Too much diversity, sometimes my agent thinks; it still alarms him that I want to people my novels with EVERYBODY, and he thinks since I only represent one (and a quarter) ethnicities, I should give it a rest, but I don't think I will. :D

"Too much diversity" is hilarious to me, especially for someone who lives in New York. :)