I have to admit that I like titles which are long and involved, and contain the word "or." The full title of today's review is The Atomic Weight of Secrets, or The Arrival of the Mysterious Men in Black by Eden Unger Bowditch, and it's Book 1 in the Young Inventor's Guild series. The title is the first hint that this book isn't the run of the mill middle grade story. The second hint is that it's a story wherein everyone is kidnapped -- or abandoned -- and it's not clear exactly just who has been kidnapped or abandoned. Further, it quickly becomes clear that no one knows why.

Confused yet? The reader isn't confused -- that's the amazing thing. It's clearly spelled out that Some Stuff Is Going On, Who Knows What. What isn't quite so quickly revealed is the answer to any of the above "stuff" questions. The novel ends with some pieces left dangling -- but readers are left with the sense of "and then what happened?" instead of utter frustration, so it's a mild cliffhanger, which will help readers continue to want to read.

Here's the basic storyline: Five children: Jasper Modest, his small sister, Lucy; Wallace Banneker, Faye Vigyanveta and Noah Canto-Sagas -- are all unique, in their interests and skills and places of birth, but all the same, in that they're all brilliant and accomplished children who have had their lives disrupted. Their parents are gone, working hard on... something, and Mysterious Men in Black -- well, maybe men, who can tell from their weird outfits and big hats and glasses? -- have come in their place, and taken their parents away.

Now the five children are largely on their own. 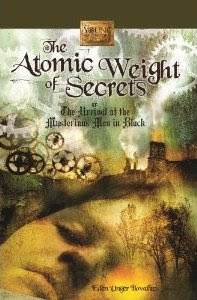 Reader Gut Reaction: A cool premise, yes? Kid vs. World is always awesome. The novel has an old-fashioned feel, as it is set in the early 1900's, and has a sort of steampunk vibe going. It opens slowly, and spends a great deal of time discussing characters, and where each of them have come from. This was necessary, but the placement of the backstory really took away a lot of the novel's momentum for me.

The Mysterious Men in Black are über mysterious -- and oddly powerful for men who dress in bunny costumes and the like. It's difficult to understand why only one child tries to escape from them, and no one rebels against being left behind. They only weep... politely, or become slightly snarky. Though the children are a product of the early 20th century, it's still hard to see that any kid would be so polite!

The children are all the offspring of scientists and engineers, so tinkering and labs are part of what the children recognize as normal, and some of what they enjoy doing for fun. And their exile IS fun -- they have soft beds, yummy food, lovely nannies and a very kind teacher -- but the facts remain: Five children were still taken away from their homes and their parents and put in a boarding school and are not being allowed to see or hear from their parents. Fake letters have been sent, fake crumples have been made in bedclothes. Their parents are not there. The Men in Black ARE there -- and they are patrolling and spying and watching.

It seems that the children are in danger. But from whom? And ... WHY?

Recommended for Fans Of...: Those who appreciate a slow, thoughtful tale with clues and ambiguity will like this series -- think The View from Saturday, which people either really loved, or really hated. It compares well to more straight mystery, like The Mysterious Benedict Society or The Westing Game as well. 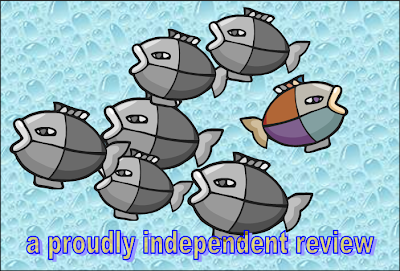 So. There you have it. A rich and complex, ambitious and nuanced middle grade mystery novel. It doesn't reach all of its goals in terms of a story arc -- its slow pace in the opening chapters somewhat dragged, and I found myself sometimes desperately wanting a few more concrete answers than I was given in terms of the "mysterious mysteries," -- but opening the book is like entering into another world. This novel transports the reader, which makes the novel perfect for a dreary Sunday afternoon. Who are the Mysterious Men in Black? Who knows... but for now, open the book, and take the first steps on a journey to find out.

Dear FCC: I read this book by invitation of the publisher, Bancroft Press, via NetGalley.

You can find THE ATOMIC WEIGHT OF SECRETS, OR, THE ARRIVAL OF THE MYSTERIOUS MEN IN BLACK at an independent bookstore near you!
Posted by tanita✿davis at 2:48 AM
Labels: Historical Fiction, Magical Realism, Reviews, Sibling Fiction, Steampunk

The minute you can compare something to The Westing Game, I'm intrigued!

Great review, Tanita! I think you really captured the heart of the book.

This book sounds so interesting, thanks for the great review. I think I'll have to look up the other books you mentioned as well.

Thanks, guys - you'll really enjoy immersing yourself in this one.