I received a review copy of this book from the publisher, First Second.

Here at FW, we've been a fan of Gene Yang for a long time, and we've loved reading his graphic novels, both the ones produced solely by him as well as the ones in which he collaborated with fellow writers and artists. In this latest work, artist Thien Pham does the visuals. 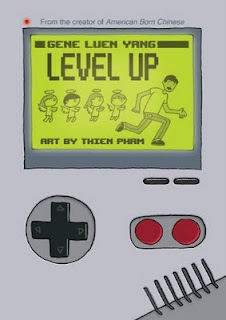 Reader Gut Reaction: Level Up is a pensive yet also humorous look at the rather confusing life of Dennis Ouyang, a young man who gives up video games and succumbs to the pressure to become a gastroenterologist. Who's pressuring him? Well, it WAS his father, but his father's passed away. Now, there's this rather pesky quartet of guardian angels ensuring that Dennis sticks to his father's wishes. It's a cute, funny premise, and the driving theme will be familiar to anyone who's ever felt parental pressure to enter a career. I know I got a lot of the be-a-doctor spiel while I was growing up, so I felt for Dennis. Besides the charming story (and a rather thoughtful, unexpected ending), I loved the formatting of this book, too—not just the Gameboy-esque cover, but also the video game screens that preceded each section of the story.

Concerning Character: Dennis is pretty easy to relate to if you grew up as part of a videogame-playing generation. At a certain point, people start to expect you to put aside your childish things and just be a grown-up. (I say THPPT to that, but anyway.) And so it is with Dennis, who adores videogames but also wants to be a good son and please his mother and late father. He's not entirely successful at first, clutching at his games like an addict to a crack pipe (or so I imagine). But then four helpful, terribly cute and unavoidably annoying guardian angels come along and kick his butt back on track.

The side characters are nicely realized here, sketched in quickly and clearly, from Dennis's family members to his friends in medical school. And I'd also like to point out something I particularly liked about the artwork: we know Dennis and his family are Asian, we can assume his friends Takeem and Ipsha are South Asian, and Hector Martinez is Latino—but visually speaking, the art doesn't beat us over the head with that. What I guess I'm trying to say is that the individual characters show differentiation and individuality without ever straying into visual ethnic stereotypes. All of them are rendered in an equally minimal, charming and cartoony style.

Recommended for Fans Of...: Other graphic novels that explore identity issues and discovering who you really are inside, like the work of Hope Larson, Kevin Pyle, Mariko Tamaki & Jillian Tamaki, and Jessica Abel. Authors who explore what it means to grow up Asian-American, like Lisa Yee, Justina Chen and Neesha Meminger.

Themes & Things: I like the fact that one of the driving themes of this book is the idea that for some of us, it takes a long time to figure out what you really want to do with your life, as you navigate your own predilections, assumptions and other baggage as well as outside pressures. And it's not always a smooth or direct road.

Authorial Asides: Read our Summer Blog Blast Tour interview with Gene Yang after the publication of American Born Chinese, and check out our recap of the kickoff of the Diversity in YA tour, at which Aquafortis got to meet Mr. Yang and be an awkward fangirl. You can also read our reviews of American Born Chinese, The Eternal Smile, and Prime Baby.

You can find Level Up at an independent bookstore near you!
Posted by Sarah Stevenson at 8:00 AM
Labels: AF, Graphic Novels, Magical Realism, Multicultural Fiction, Reviews