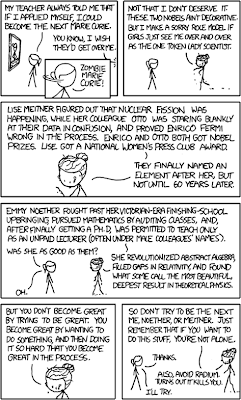 XKCD makes me happy. (Click to embiggen the cartoon.)

May 8th was the 100th celebration of International Woman's Day. The Guardian newspaper put out a list of the top 100 women from around the globe, and while Marie Curie would indeed be on that list of science and technology chicks were she alive... she didn't make the cut this year.

Here are some actual folk who SHOULD make the list:

Jacqueline Barton probes DNA with electrons. The electrons are shot through the DNA and custom built molecules direct the electrical currents. This allows for the location of genes to be determined and to see their arrangement as well as to scan for damage. These techniques have the potential to result in new techniques to diagnose diseases and treat them through direct DNA repair.

She co-founded GeneOhm Sciences in 2001 which became part of Becton, Dickinson and Company in 2006.

The 1930s and 1940s saw the invention of synthetic fibers like nylon and polyester. Suddenly, clothes no longer needed ironing or pressing. Cotton farmers started to worry. Despite cotton feeling more comfortable and cooler against the skin, people were chasing clothes made from the new low maintenance fabrics.

Ruth Benerito developed a method for creating cotton that was wrinkle resistant. The technique also made the cotton flame resistant and stain resistant.

Ruth Erica Benesch together with her husband Reinhold Benesch, (1919-1986) found the mechanism of hemoglobin releasing its oxygen as it travels throughout the body. It turned out that the build up of carbon dioxide signals to a hemoglobin molecule that a cell has used up available oxygen and needs another supply. This ensures that oxygen is released to where it is needed most in the body.

Carolyn Bertozzi has helped design artificial bones that mimic the chemistry of real bones. This reduces the risk of reactions or rejections. She has also helped develop contact lenses which are eyeball friendly as the materials that go into them resemble the surface of the eye.

Hawa Abdi, one of Somalia's first female gynecologist, in 1983 opened a small clinic for women and children on her family farm. When the country descended into civil war in 1991 she opened the clinic to all and now the camp near Mogadishu is home to around 90,000 people, mostly displaced women and children seeking refuge and treatment for everything from war injuries to malnutrition and disease.

When Islamic militants invaded the camp, they took Abdi hostage for a week, saying women should not be allowed to be in control of such a place. "I may be a woman, but I'm a doctor," she said. "What have you done for society? Glamour Magazine named the good doctor and her two daughters women of the year in 2010, describing the doctor as "equal parts Mother Theresa and Rambo."

Look for more women on the full Guardian list.

It's true that we tend to lean heavily on history, in terms of trying to find heroines in science and math for students. Please, don't make the zombie formerly known as Marie Curie get up yet again... here's to modern women in science and technology.
Posted by tanita✿davis at 7:43 AM
Labels: Random Notes and Errata

And how much do I love zombie stick-figure Marie Curie??